Why Aren’t Americans Rising Up Like We Are Seeing Across the Planet? 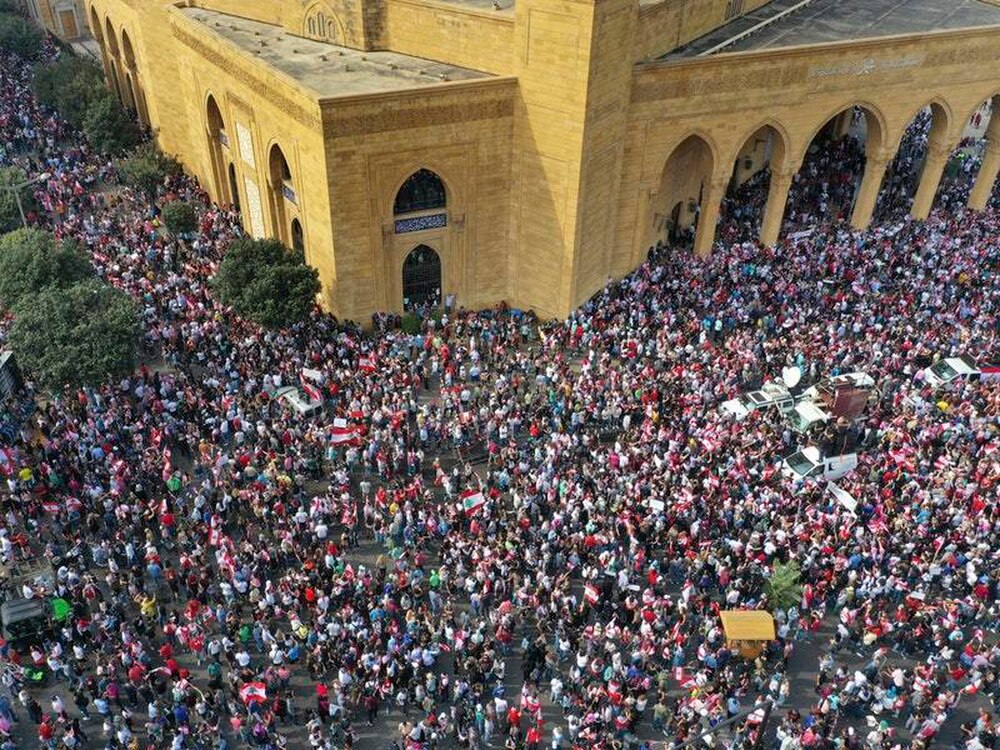 The waves of protests breaking out in country after country around the world beg the question: Why aren’t Americans rising up in peaceful protest like our neighbors? We live at the very heart of this neoliberal system that is force-feeding the systemic injustice and inequality of 19th-century laissez-faire capitalism to the people of the 21st century. So we are subject to many of the same abuses that have fueled mass protest movements in other countries, including high rents, stagnant wages, cradle-to-grave debt, ever-rising economic inequality, privatized health care, a shredded social safety net, abysmal public transportation, systemic political corruption and endless war.

We also have a corrupt, racist billionaire as president, who Congress may soon impeach, but where are the masses outside the White House, banging pots and pans to drive Trump out? Why aren’t people crashing the offices of their congresspeople, demanding that they represent the people or resign? If none of these conditions has so far provoked a new American revolution, what will it take to trigger one?

In the 1960s and 1970s, the senseless Vietnam War provoked a serious, well-organized antiwar movement. But today the U.S.’s endless wars just rage on in the background of our lives, as the U.S. and its allies kill and mutilate men, women and children in distant countries, day after day, year after year. Our history has also witnessed inspiring mass movements for civil rights, women’s rights and gay rights, but these movements are much tamer today.

The Occupy Movement in 2011 came closest to challenging the entire neoliberal system. It awakened a new generation to the reality of government of, by, and for the corrupt 1 percent, and built a powerful basis for solidarity among the marginalized 99 percent. But Occupy lost momentum because it failed to transition from a rallying point and a decentralized, democratic forum to a cohesive movement that could impact the existing power structure.

The climate movement is starting to mobilize a new generation, and groups like School Strike for the Climate and Extinction Rebellion take direct aim at this destructive economic system that prioritizes corporate growth and profits over the very survival of life on Earth. But while climate protests have shut down parts of London and other cities around the world, the scale of climate protests in the U.S. does not yet match the urgency of the crisis.

So why is the American public so passive?

Americans pour their energy and hopes into electoral campaigns. Election campaigns in most countries last only a few months, with strict limits on financing and advertising to try to ensure fair elections. But Americans pour millions of hours and billions of dollars into multi-year election campaigns run by an ever-growing sector of the commercial advertising industry, which even awarded Barack Obama its “Marketer of the Year” award for 2008. (The other finalists were not John McCain or the Republicans but Apple, Nike and Coors beer.)

When U.S. elections are finally over, thousands of exhausted volunteers sweep up the bunting and go home, believing their work is done. While electoral politics should be a vehicle for change, this neoliberal model of corporate “center-right” and “center-left” politics ensures that congresspeople and presidents of both parties are primarily accountable to the ruling 1 percent who “pay to play.”

Former President Jimmy Carter has bluntly described what Americans euphemistically call “campaign finance” as a system of legalized bribery. Transparency International (TI) ranks the U.S. 22nd on its political corruption index, identifying it as more corrupt than any other wealthy, developed country.

Without a mass movement continually pushing and prodding for real change and holding politicians accountable—for their policies as well as their words—our neoliberal rulers assume that they can safely ignore the concerns and interests of ordinary people as they make the critical decisions that shape the world we live in. As Frederick Douglass observed in 1857, “Power concedes nothing without a demand. It never did and it never will.”

Millions of Americans have internalized the myth of the “American dream,” believing they have exceptional chances for social and economic mobility compared with their peers in other countries. If they aren’t successful, it must be their own fault—either they’re not smart enough or they don’t work hard enough.

The American Dream is not just elusive—it’s a complete fantasy. In reality, the U.S. has the greatest income inequality of any wealthy, developed country. Of the 39 developed countries in the Organization for Economic Co-operation and Development (OECD), only South Africa and Costa Rica exceed the U.S.’s 18 percent poverty rate. The United States is an anomaly: a very wealthy country suffering from exceptional poverty. To make matters worse, children born into poor families in the U.S. are more likely to remain poor as adults than poor children in other wealthy countries. But the American dream ideology keeps people struggling and competing to improve their lives on a strictly individual basis, instead of demanding a fairer society and the health care, education and public services we all need and deserve.

The corporate media keeps Americans uninformed and docile. The U.S.’s corporate media system is also unique, both in its consolidated corporate ownership and in its limited news coverage, endlessly downsized newsrooms and narrow range of viewpoints. Its economics reporting reflects the interests of its corporate owners and advertisers; its domestic reporting and debate are strictly framed and limited by the prevailing rhetoric of Democratic and Republican leaders; its anemic foreign policy coverage is editorially dictated by the State Department and Pentagon.

This closed media system wraps the public in a cocoon of myths, euphemisms and propaganda to leave us exceptionally ignorant about our own country and the world we live in. Reporters Without Borders ranks the U.S. 48th out of 180 countries on its Press Freedom Index, once again making the U.S. an exceptional outlier among wealthy countries.

It’s true that people can search for their own truth on social media to counter the corporate babble, but social media is itself a distraction. People spend countless hours on Facebook, Twitter, Instagram and other platforms venting their anger and frustration without getting up off the couch to actually do something—except perhaps sign a petition. “Clicktivism” will not change the world.

Add to this the endless distractions of Hollywood, video games, sports and consumerism, and the exhaustion that comes with working several jobs to make ends meet. The resulting political passivity of Americans is not some strange accident of American culture but the intended product of a mutually reinforcing web of economic, political and media systems that keep the American public confused, distracted and convinced of our own powerlessness.

The political docility of the American public does not mean that Americans are happy with the way things are, and the unique challenges this induced docility poses for American political activists and organizers surely cannot be more daunting than the life-threatening repression faced by activists in Chile, Haiti or Iraq.

So how can we liberate ourselves from our assigned roles as passive spectators and mindless cheerleaders for a venal ruling class that is laughing all the way to the bank and through the halls of power as it grabs ever more concentrated wealth and power at our expense?

Few expected a year ago that 2019 would be a year of global uprising against the neoliberal economic and political system that has dominated the world for 40 years. Few predicted new revolutions in Chile or Iraq or Algeria. But popular uprisings have a way of confounding conventional wisdom.

The catalysts for each of these uprisings have also been surprising. The protests in Chile began over an increase in subway fares. In Lebanon, the spark was a proposed tax on WhatsApp and other social media accounts. Hikes in fuel tax triggered the yellow vest protests in France, while the ending of fuel subsidies was a catalyst in both Ecuador and Sudan.

The common factor in all these movements is the outrage of ordinary people at systems and laws that reward corruption, oligarchy and plutocracy at the expense of their own quality of life. In each country, these catalysts were the final straws that broke the camel’s back, but once people were in the street, protests quickly turned into more general uprisings demanding the resignation of leaders and governments.

They have the guns but we have the numbers. State repression and violence have only fueled greater popular demands for more fundamental change, and millions of protesters in country after country have remained committed to non-violence and peaceful protest—in stark contrast to the rampant violence of the right-wing coup in Bolivia.

While these uprisings seem spontaneous, in every country where ordinary people have risen up in 2019, activists have been working for years to build the movements that eventually brought large numbers of people onto the streets and into the headlines.

Erica Chenoweth’s research on the history of nonviolent protest movements found that whenever at least 3.5 percent of a population have taken to the streets to demand political change, governments have been unable to resist their demands. Here in the U.S., Transparency International found that the number of Americans who see “direct action,” including street protests, as the antidote to our corrupt political system has risen from 17 percent to 25 percent since Trump took office, far more than Chenoweth’s 3.5 percent. Only 28 percent still see simply “voting for a clean candidate” as the answer. So maybe we are just waiting for the right catalyst to strike a chord with the American public.

In fact, the work of progressive activists in the U.S. is already upsetting the neoliberal status quo. Without the movement-building work of thousands of Americans, Bernie Sanders would still be a little-known senator from Vermont, largely ignored by the corporate media and the Democratic Party. Sanders’ wildly successful first presidential campaign in 2016 pushed a new generation of American politicians to commit to real policy solutions to real problems instead of the vague promises and applause lines that serve as smokescreens for the corrupt agendas of neoliberal politicians like Trump and Biden.

We can’t predict exactly what catalyst will trigger a mass movement in the U.S. like the ones we are seeing overseas, but with more and more Americans, especially young people, demanding an alternative to a system that doesn’t serve their needs, the tinder for a revolutionary movement is everywhere. We just have to keep kicking up sparks until one catches fire.

Medea Benjamin, co-founder of CODEPINK for Peace, is the author of several books, including Inside Iran: The Real History and Politics of the Islamic Republic of Iran and Kingdom of the Unjust: Behind the U.S.-Saudi Connection.

Nicolas J. S. Davies is an independent journalist, a researcher for CODEPINK, and the author of Blood on Our Hands: The American Invasion and Destruction of Iraq.