Who would Jesus bomb: Thrivent Financial’s investments in war and migrant prisons 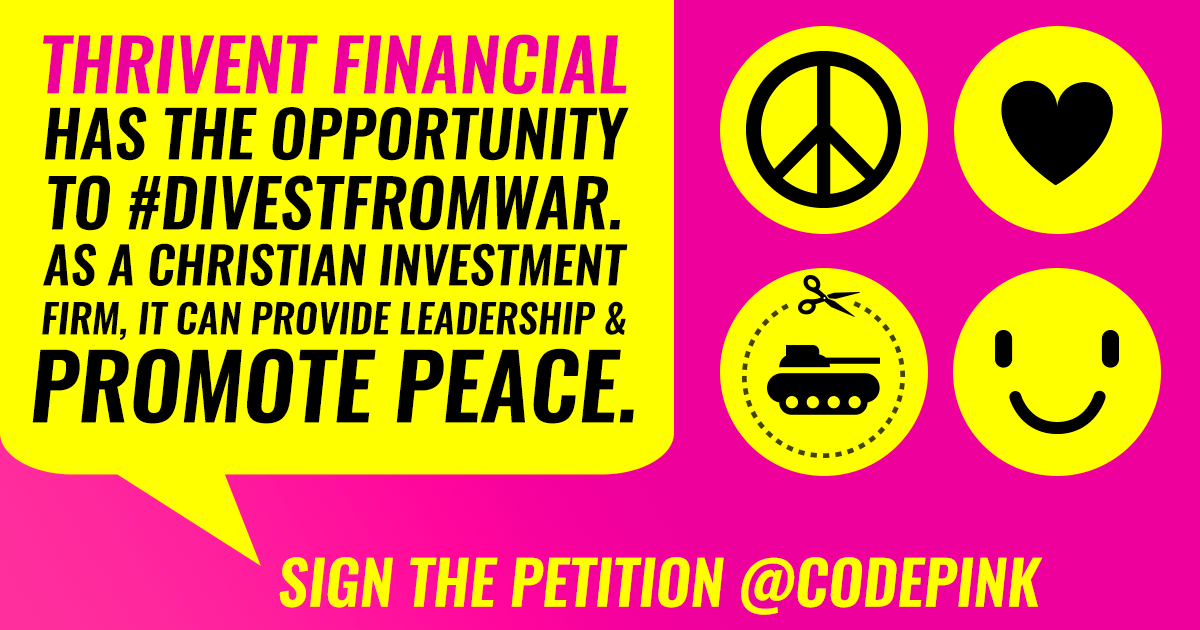 The investments for Thrivent Financial for Lutherans includes the largest asset management firm BlackRock which is also the world’s largest investor in weapons of war. BlackRock is the top investor in weapons manufacturers such as Lockheed Martin, Boeing, Raytheon, Northrop Grumman, and General Dynamics. BlackRock invests roughly $38 million in the production, maintenance, and modernization of nuclear weapons, according to the Don’t Bank on the Bomb 2018 report released by the Dutch organization PAX. BlackRock maintains significant stakes in General Dynamics, a defense company profiting from the U.S migrant crisis.

Separate from Blackrock, Thrivent invests directly in Lockheed Martin, a company making a killing on killing. In August of 2018, 44 Yemeni children were killed and 77 wounded in a brazen attack on a school bus. According to a CNN report, the bomb responsible for the attack was made by Lockheed Martin. Additionally, in numerous Israeli assaults on the Gaza Strip, Lockheed Martin jets, helicopters, and missiles played major roles. The majority of those killed were innocent civilians. A study done by the Defense for Children International into the 2014 assault on Gaza determined that at least 225 of the 550 children killed in the 50-day assault, died from Israeli warplane attacks, including by Lockheed Martin F-16 fighter jets.

Thrivent is invested in General Dynamics, a weapons maker, providing arms to Saudi Arabia. The company has been implicated in war crimes and the loss of countless innocent lives around the world. It was also involved in the Yemeni school bus attack that was mentioned earlier. Remnants of its guided metal fin were found at the scene. General Dynamics has a long-lasting contract with Saudi Arabia estimated at $1.3 billion dollars -providing weapons to a country waging a war on Yemen which has already killed an estimated six thousand innocent civilians.

Thrivent’s investments include other war profiteers like Boeing, Northrop Grumman, and Raytheon which are active in U.S. conflicts around the world. Since the mid-1960s, Raytheon has provided weapons to Saudi Arabia. In April 2018, a Raytheon missile was responsible for the killing of at least 20 people at a Yemeni wedding party. Saudi Arabia is leading the war in Yemen which is responsible for the displacement and killing of thousands of innocent civilians. Northrop Grumman and Boeing are listed as two of the world’s top war profiteers.

Disappointingly, Thrivent is invested in U.S. migrant prison companies The Geo Group and Core Civic. The two companies along with General Dynamics have taken federal immigration contracts, implementing the Trump administration’s inhumane policies. Core Civic and Geo Group’s for-profit prisons receive financial incentive for incarcerating people. Both companies operate the largest family detention facilities. Immigrant detainees state that they have been physically and sexually assaulted at the prisons. General Dynamics is a prime example of a company profiting from those who are suffering. The military contractor provides “social services” to migrant children held at the prisons.

Breaking bread with Thrivent is no easy feat. CODEPINK has outreached to the Christian-based financial organization over the phone, email, and snail mail. We successfully received a letter of acknowledgment; however, that was it. 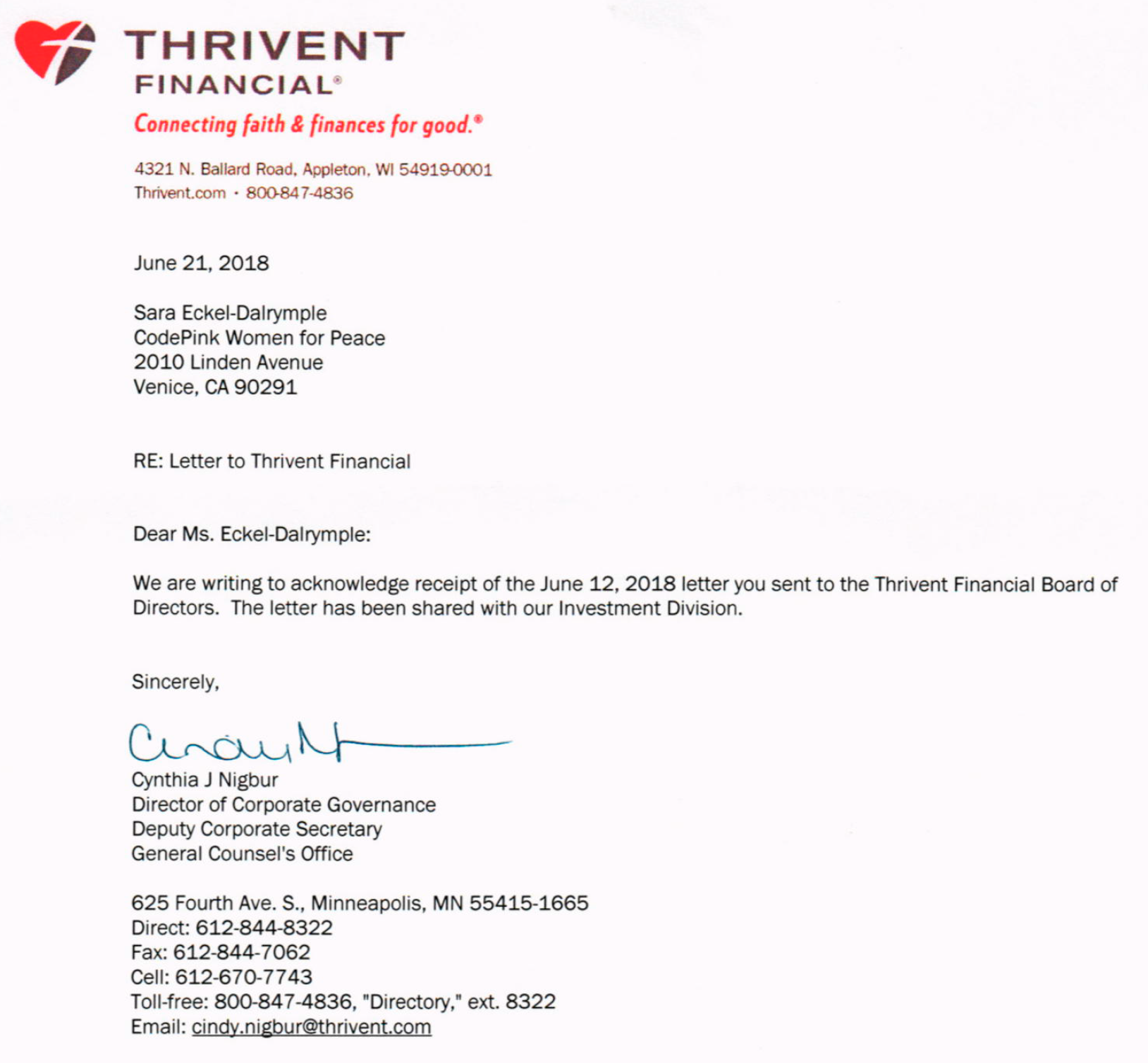 Thrivent’s silence on further engagement has been a mystery. In hopes of getting their attention, we launched a social media campaign and petition. The social media campaign happened over the Advent holiday with a playful calendar and the petition received notable signatures from Winona LaDuke, Jodie Evans, Nina Utne, and members of the Lutheran Church. 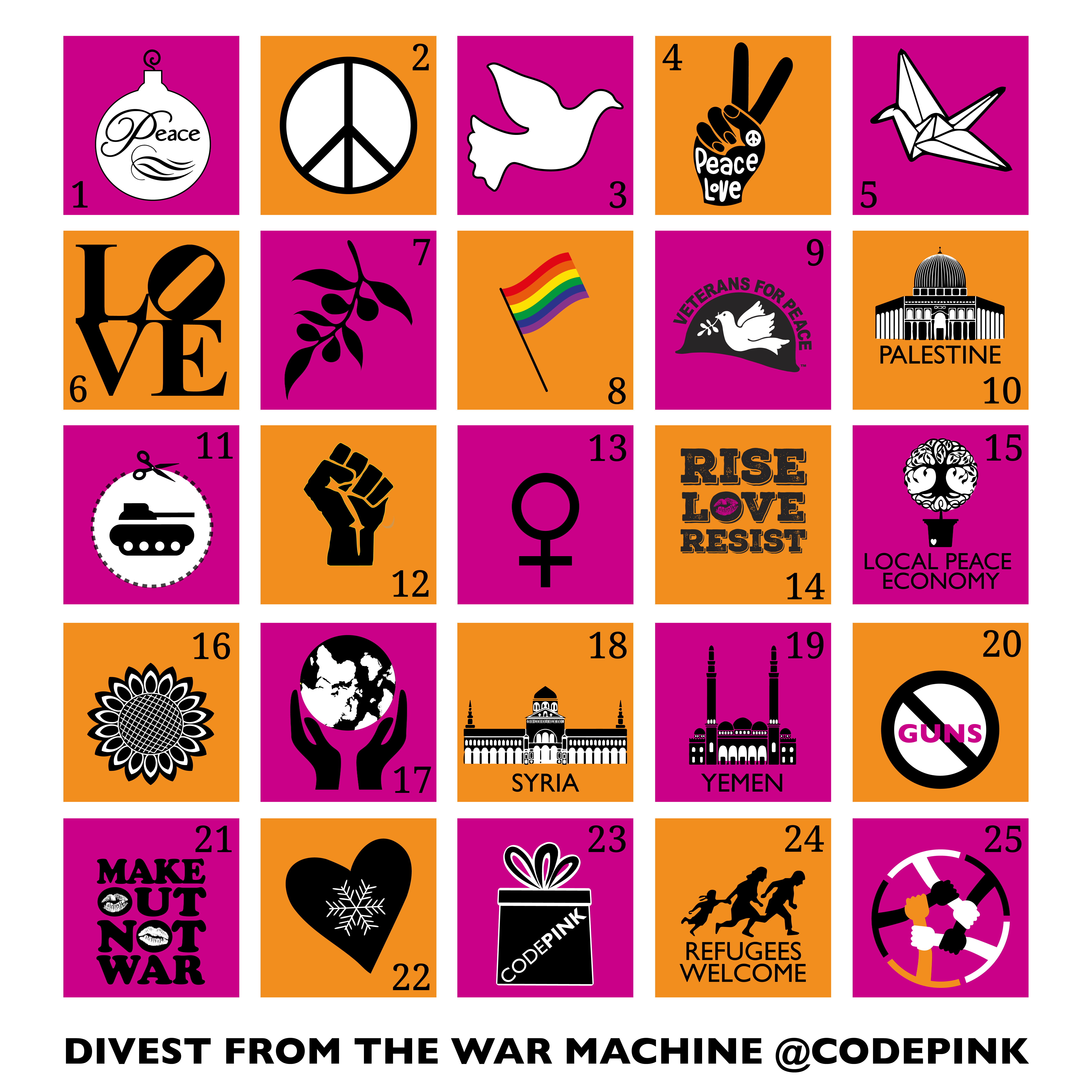 Somewhere along the way, Thrivent Financial for Lutherans has lost its roadmap to peace and acceptance. It is an organization founded by Lutherans, representing over 2 million members. Instead of welcoming strangers with open arms, Thrivent has aligned themselves with the military and prison industrial complex. Help us reach out to Thrivent Financial and sign the petition.