Who arranged Oprah’s meeting with the Saudi prince? 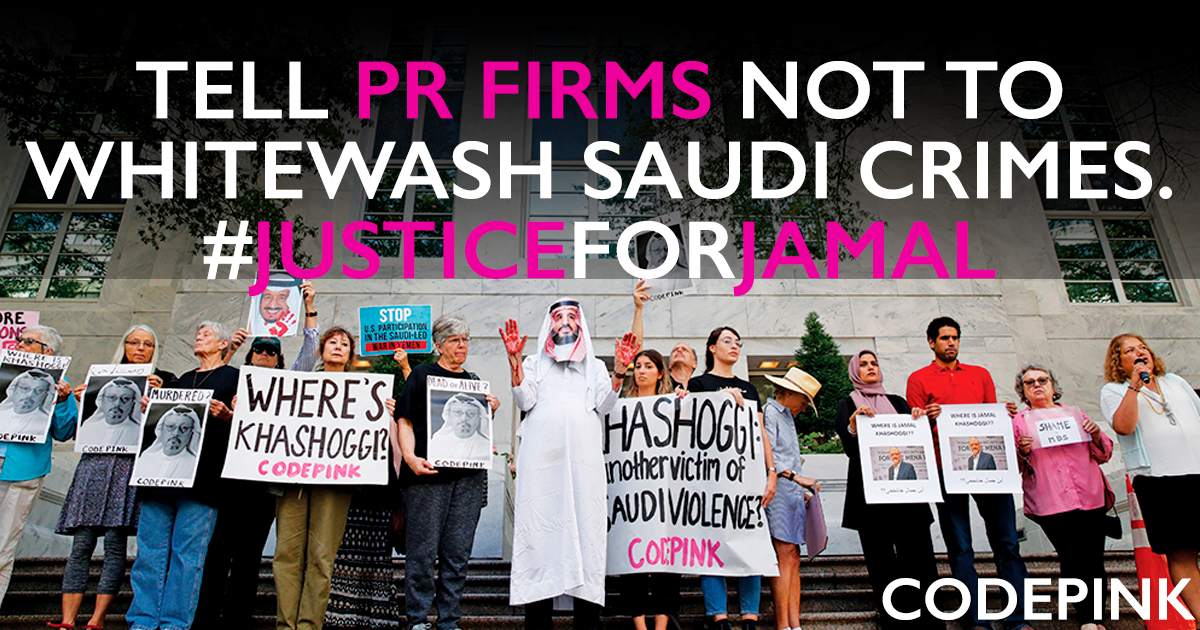 Sky News reported today that the remains of murdered Washington Post journalist Jamal Khashoggi were found inside the garden of the Saudi consul general’s home in Istanbul. He was cut into pieces, his face disfigured.

PR firms in the pay of the Saudi government are already working overtime to whitewash this horror. One by one, we will name and shame them into dropping their contracts. Already, three companies—the Harbour Group, the BGR Group and The Glover Park Group—announced they are breaking their contracts. Now let’s get the McKeon Group to do the same. Howard “Buck” McKeon, who heads the company, has been using his influence from his days as Chair of the House Armed Services Committee to garner support for the Saudis. Join us in telling the McKeon Group to drop its contract with the murderous Saudi regime.

McKeon brags that it “positions its clients to have a direct line to policymakers at all levels of the federal government ensuring that their voice is heard.” For Saudi Arabia, that has involved creating an image of reform and modernization to cover up a reality where journalists and dissidents are jailed and murdered, and the Yemeni people die from a Saudi-led and U.S. supported bombing campaign.

There is nothing moderate or reformist about Saudi Crown Prince Mohammed bin Salman (MbS), but when MbS came to the U.S. this past spring, firms like the McKeon group got him high-level meetings with Senators, government officials, entertainment figures like Oprah, and business leaders like Bill Gates and Jeff Bezos. Behind this PR-manufactured veneer of reform is a man who bombs school buses full of children and deployed a team of hit men to murder Jamal Khashoggi in cold blood.

Under pressure after Khashoggi’s murder, several PR firms have already dropped their Saudi clients. But Buck McKeon continues to get $50,000 a month in blood money. Tell McKeon to stop profiting from murder by joining the other firms that have already cancelled their Saudi contracts.

Next on our sights? Brownstein, Hyatt, Farber, Schreck (BHFS) and Qorvis/MSLGroup. Stay tuned...

P.S. Sign up now to join our one-day Peace with Iran summit December 1, in Washington, D.C. And if you are interested in joining our Peace Delegation to Iran on January 12-20, contact [email protected].