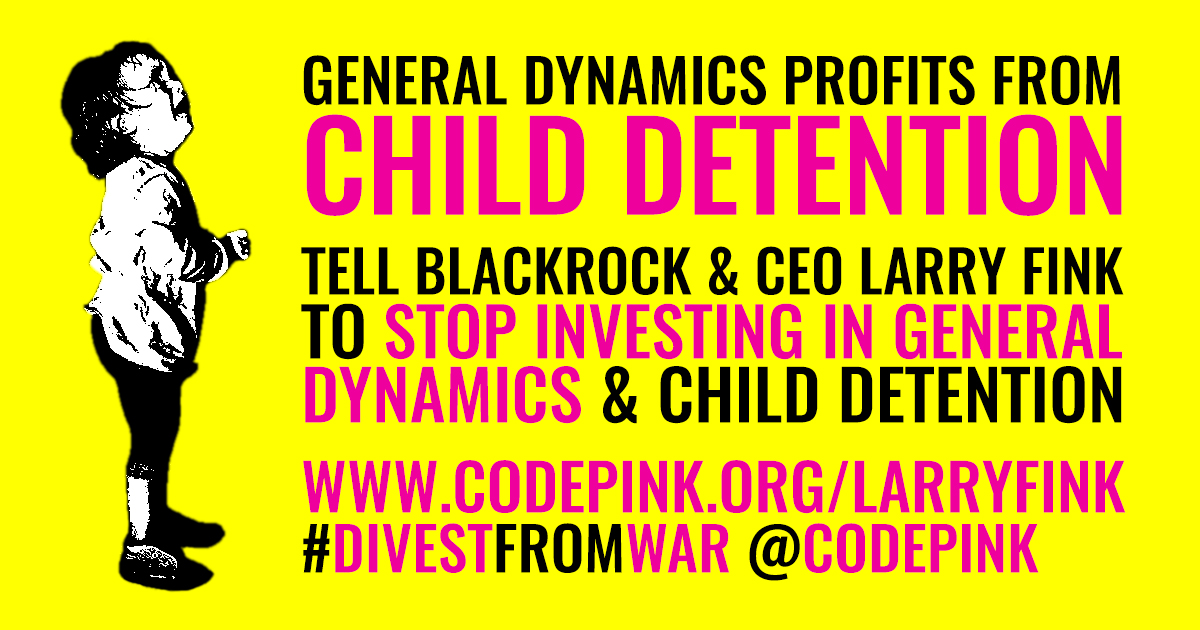 BlackRock is the largest asset manager globally, controlling over $8 trillion in assets under management (AUM). In addition, BlackRock is the world’s largest shadow bank. It maintains significant stakes in weapons companies such as General Dynamics, Northrop Grumman, Boeing, Lockheed Martin, and Raytheon. General Dynamics is a prime example of a company profiting from those who are suffering. The military contractor has taken a government contract to provide “social services” to migrant children at U.S. detention camps. In the past, General Dynamics has supplied weapons to Saudi Arabia, Israel, Iraq, and Turkey and directly benefited from the U.S. invasion of Iraq.

I.T., caseworker support, file review and redaction, data entry. Services that provide for tracking and managing files when children and families are in the immigration system.

Why are you targeting BlackRock instead of General Dynamics?

BlackRock owns more than 16 million shares of General Dynamics stock. BlackRock is directly profiting from General Dynamics’ actions as a part of border militarization. Putting pressure on shareholders is how we can start to shift the conversation around how we treat immigrants and others impacted by U.S. war policies.

Is General Dynamics profiting from other parts of border militarization?

General Dynamics holds several government contracts for information technology and support services for many government agencies, including the Department of Homeland Security.

Are there any other military contractors who are profiting from child detention?

Yes, MVM. MVM is a private security firm that provides services to several government agencies. As a result, we have an opportunity to put pressure on BlackRock and other shareholders for their role in profiting from General Dynamics’ role in family separation, child detention, and other unjust practices that target immigrants and refugees.

What agency is contracting out with General Dynamics?

Specifically, regarding the role that General Dynamics plays in profiting from child detention facilities, its contract is with the U.S. Department of Health and Human Services (HHS). HHS is a part of the network of agencies that handle immigration and refugee cases in the U.S.; for example, the Office of Refugee Resettlement (ORR) is a part of Health and Human Services. ORR Is responsible for coordinating services for refugees. General Dynamics provides information technology systems and support for managing refugee case files.