Weekly US intervention in Venezuela Monitor 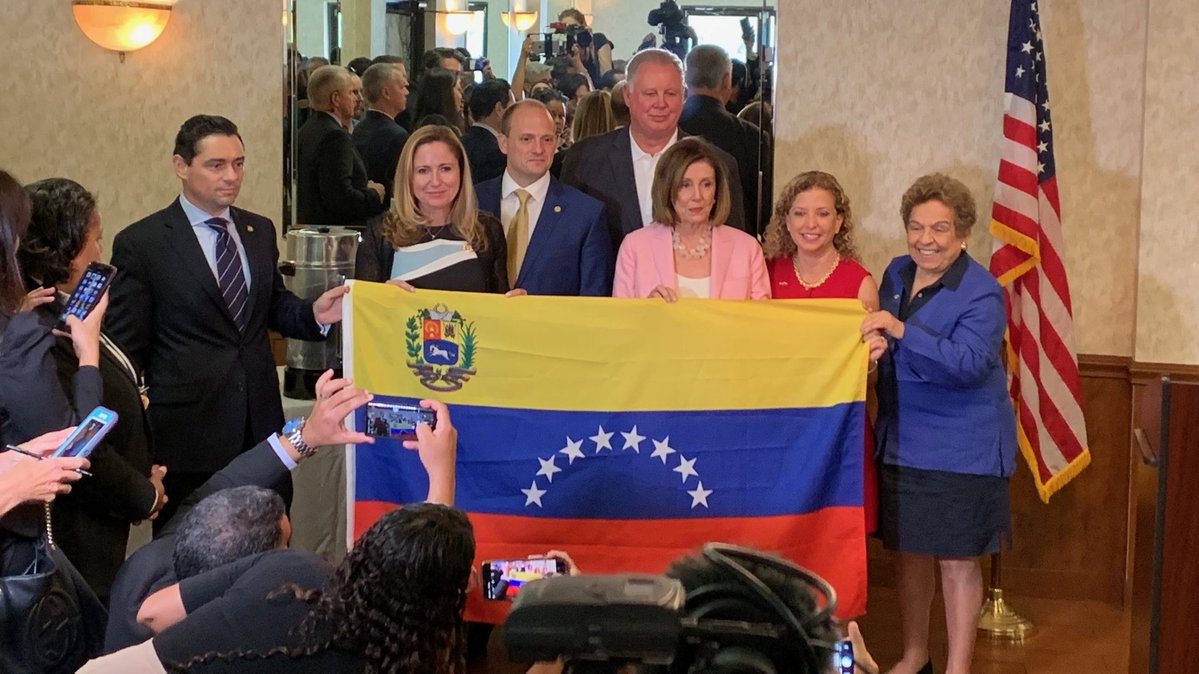 By Michelle Ellner for CODEPINK

Democrats have not only failed to raise their voices against the cruel sanctions that have led to the death of more than 40.000 Venezuelans, but now they are playing the same game as  President Trump, demonstrating that electoral calculations are their real concern and not the suffering of the Venezuelan people. Specifically, the Democrats have failed to challenge the U.S. military threats and economic warfare against Venezuela. This failure has ended up working to Trump’s advantage because the Democrats are unable to out–hawk him on issues like Venezuela and Cuba. Thus, the president is able to claim the support of a large percentage of voters of Cuban and Venezuelan origin in Florida, a key swing state for the 2020 presidential elections.

Both majority leader Nancy Pelosi and President Trump were in Florida in early October. Trump, at his gathering, demonized the “Medicare for All” proposal, supported by many Democrats, by using Venezuela as an example of the “failure of socialism”.

House Speaker Nancy Pelosi and other Democrat house representatives who accompanied her, were, in effect, attempting to assure voters that when the Democrats impeach Trump and/or win the 2020 elections, they will not be weak on Venezuela.  Pelosi, Rep. Donna Shalala (D), Rep. Debbie Wasserman Schultz (D) and Debbie Mucarsel-Powell (D) participated in a roundtable about Temporary Protection Status (TPS) for Venezuelans accompanied by opposition leader Juan Guaido’s representative in the US, Carlos Vecchio. Extending TPS for Venezuelans is the one opening for the Democrats that they are taking full advantage of, and may explain the presence of the right-wing Vecchio at the event. While Trump, consistent with his position on immigration in general, has evaded the issue of the extension of TPS, the Democrats support applying the measure for Venezuelan asylum seekers.

In addition, in Cold War style, the Democrats have also attempted to outflank Trump on the right by taking advantage of Trump’s weakness towards Russia. The House representatives came to Miami with a script blaming Trump for Venezuela President Maduro’s success in retaining power.

“The reason that Maduro in large part is still in power is because of the assistance that Trump is allowing Putin to continue to provide to Maduro.” (…) “What he should be doing is pressuring Putin. If he’s going to pressure any world leader in taking action, it should be that Putin gets out of our hemisphere, withdraws his troops, and his military and espionage support for Maduro, stops propping up Maduro.” -Rep. Debbie Wasserman Schultz

“I don’t think we have exhausted all options (…) We have to put pressure on Russia. The President is very close to Vladamir Putin, we’ve seen that in the past two, three years.”- Rep. Debbie Mucarsel-Powell

“Trump has made it clear that he loves Russia” (…) [he has to] “be the big boy in the room that puts pressure on Russia.” Rep. Donna Shalala

In addition, Pelosi claimed she had challenged Maduro’s predecessor, Hugo Chavez, years ago by questioning why humanitarian needs weren’t being met, why the middle class was shrinking and poverty growing in a country with so many natural resources. “I’ve had my eye on the situation in Venezuela for awhile,” she said. “We are relentless in the fight for democracy in Venezuela, restoring democracy in Venezuela.”

The shameful part of the event was the complete omission of any talk about the devastating effects of US sanctions on the people of Venezuela. Rep. Shalala gleefully stated: “We’re going to squeeze Maduro until he cries for help and he’s ready to leave.” She says this even though it is the people of Venezuela who are really the ones being targeted and hurt.

Trump’s pronouncements this week on Venezuela

“You look at Venezuela; take a look at that. Fifteen years ago, it's one of the wealthiest countries. Now they don't have food. They don't have water. The hospitals are a disaster. No electricity. No anything. It's very sad. And we're helping the people as much as we can. But we're watching that whole situation -- beyond this, we're watching it very, very carefully.” Trump 10/03.

US attempts to get Europe on board

Despite Elliott Abrams’ efforts touring European nations and urging them to scale up sanctions against Venezuela, the US has been largely unsuccessful in demanding more stringent European sanctions aside from the individual ones adopted over the recent past. . The US continues to pressure the EU and make Venezuela a topic of conversation in nearly every encounter with representatives from those countries. The US is also demanding the enforcement of sanctions on Russia in order to convince that nation to withdraw support for Venezuela. According to Mc Clatchy’s DC Bureau, Trump’s advisers want Europe and Latin America to aggressively expand collective unilateral sanctions that will, in the words of a senior State Department official, compound “political and psychological pressure” on Maduro and his aides.

Pompeo Interviewed on La Stampa: “I've had the chance now to have a meeting with my foreign ministry counterpart [from Italy] as well as the prime minister and the president (…) Spent a lot of time talking about Venezuela and the nasty humanitarian crisis that exists there.” 10/02

Press Release. Pompeo’s Meeting with Vatican Secretary of State Cardinal Pietro Parolin and Secretary for Relations with States Archbishop Paul Gallagher: “Marking this 35th anniversary year of the establishment of formal diplomatic relations between the United States and the Holy See, Secretary Pompeo thanked Cardinal Parolin and Archbishop Gallagher for the Vatican’s efforts to provide humanitarian assistance and end the suffering of the Venezuelan people.” 10/03

Pompeo and Italian Foreign Minister Luigi Di Maio Hold Joint News Conference: “I've asked for Italy's support too, and we talked about today the necessary task of confronting Nicolas Maduro for his repression and the socialist mismanagement that has taken place in Venezuela. EU sanctions should be enforced against Russia until such time that the situation changes materially.”

In an interview with Mc Clatchy and Miami Herald, Elliott Abrams stated:

“It would be great for some of the people involved in the regime’s crimes not to be able to travel in Latin America,” Abrams said. “You have bank accounts in Latin America. So there’s a variety of forms of pressure, and we think that expanding the pressures to include European and Latin democracies is a useful form of political and psychological pressure on the regime.” “We want to see EU sanctions,” Abrams said. “We would like to see broader sanctions than that.” “To be frank, we have run out of unilateral options, but it’s also very important that we go back to treating this as a multilateral issue,” the former official stated. “The U.S. government worked very hard at the beginning of this administration to make this a coalition effort and there were results – over 55 countries now recognize Guaidó as president. It’s important to take a step back now and let the international community catch up in many ways. I think what we need to do, really, is to identify the names that we will start with that everyone will agree on. And the mechanism is an important one, because in a number of cases, there’s no domestic legislation that deals with economic sanctions in particular. We need to get to work on specific cases,” he continued, “and translate this invocation of the treaty into actual naming of names.”

The strategy of the Trump administration is to put pressure on Venezuelan allies to comply with the effort to isolate Venezuela on all fronts. Measures include secondary sanctions against companies throughout the world, as well as pressure on countries that the US believes are vital to Maduro’s survival. Cuba is the country that most suffers from this strategy. Washington-based think tanks are recommending that the U.S. challenge the security and intelligence alliance known as the VRIC alliance (Venezuela, Russia, Iran and China). https://thehill.com/opinion/international/464012-to-get-rid-of-maduro-in-venezuela-us-must-challenge-his-enablers

Adm. Craig Faller, head of U.S. Southern Command said hundreds of Russian mercenaries are in Venezuela to “prop up the illegitimate regime". "Russia, China and Iran -- they're there, they're present, and they're working for their national interests in ways that are counter to long-term stability of the region. Russia, I'm convinced, is out to make the United States look bad [in South America] at every turn of the corner." To back Maduro, Russia has "deployed nuclear-capable bombers" for fly-bys in the region, and Russia has "deployed their most advanced warship that's capable of firing nuclear cruise missiles. (…) "what Maduro's done in his country, how he's driven it into the ground with his cronies along with the interventionist assistance of Russia, China, Iran," Faller said. "And now we see liaison with North Korea. "The palace guard around Maduro is Cuban, nearly 100% of the presidential guard are now Cuban, so there's thousands of Cubans and hundreds of Russians" in Venezuela " 10/04

On October 17, 2019, the UN General Assembly will elect 14 new members of the 47-country Human Rights Council for a three-year term beginning in January 2020. “United Nations member countries should send a clear message to the Nicolás Maduro administration that they will not reward cruel and abusive policies that have destroyed the lives of millions of people with a seat on the UN’s top human rights body,” said José Miguel Vivanco, Americas director at Human Rights Watch even though countries with severe human rights violations, such as Egypt and Brazil, are members of this Council. (UN: Deny Venezuela Human Rights Council Seat)

The Washington Post dedicated an entire section to Venezuela’s economic crisis without mentioning even once the devastating effects of the Sanctions.

CODEPINK had to answer that, through this letter to the editor.