Beyond the War: Migrations, The Red Star, and Yemeni Futurism 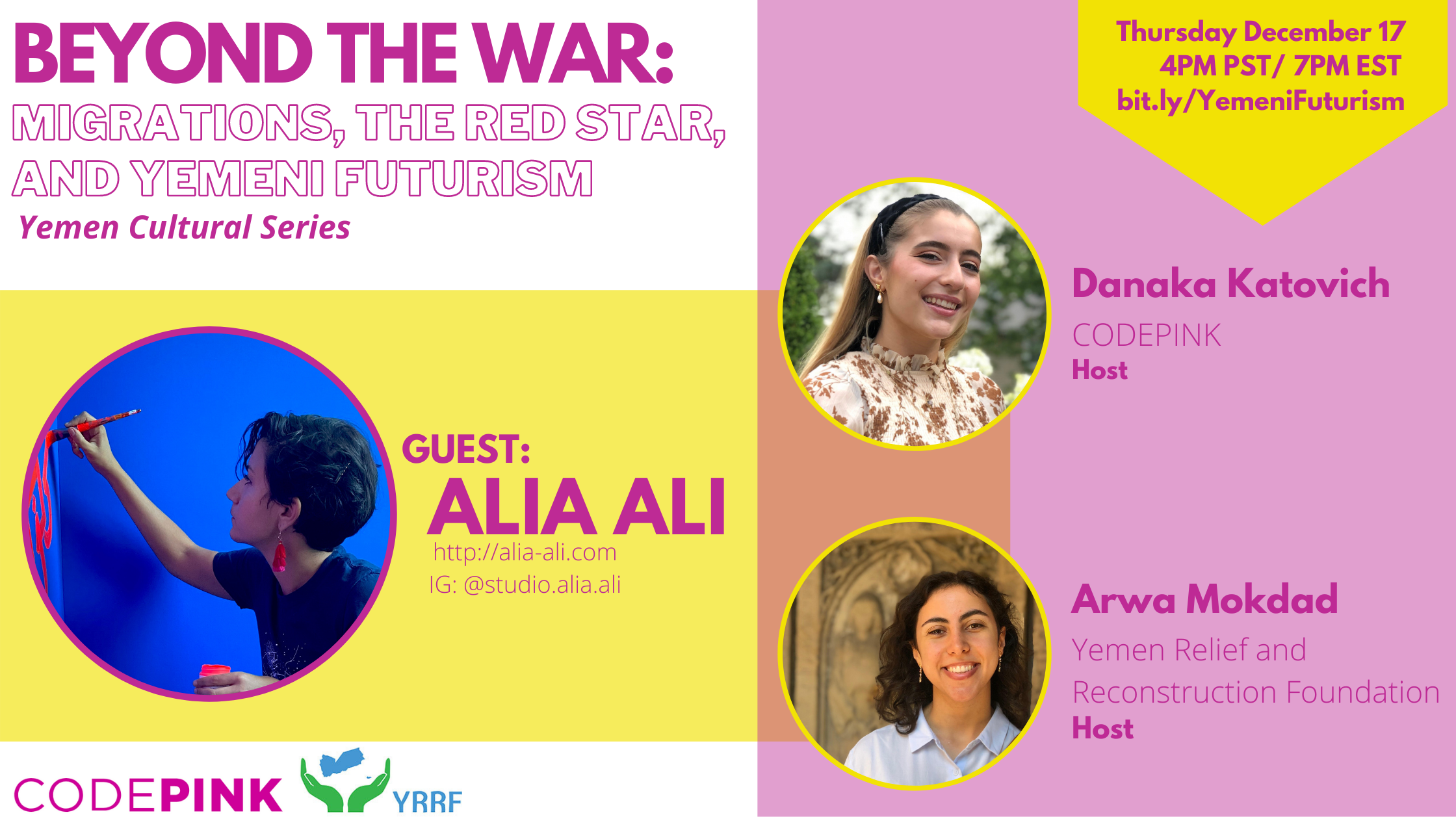 Join CODEPINK and Yemen Relief and Reconstruction Foundation for a conversation with multi-media artist, Alia Ali about her installation “The Red Star”. The “Beyond the War” Yemen cultural series will attempt to showcase Yemen outside the realm of tragedy with an emphasis on Yemeni history, celebrations, and excellence! Make sure to check out Alia's website before you tune in, and view Alia’s short film (14min) “مهجر // Mahjar (2020)” for engaging dialogue and questions. We will be reading questions from the audience to Alia throughout the webinar. CODEPINK’s Danaka Katovich and Yemen Relief and Reconstruction Foundation’s Arwa Mokdad will be hosting this webinar.

Alia Ali is a Yemeni-Bosnian-US multi-media artist. Having traveled to sixty-seven countries, lived in and between seven, and grown up among five languages, her most comfortable mode of communication is through photography, video, and installation. Her travels have led her to process the world through interactive experiences and the belief that the damage of translation and interpretation of written language has dis-served particular communities, resulting in the threat of their exclusion, rather than a means of understanding. Alia's work reflects on the politics of contested notions of linguistics, identity, borders, universality, colonization, mental/physical confinement, and the inherent dualism that exists in each of them.

Her work has been featured in the Financial Times, Le Monde, Vogue, and Hyperallergic. Alia has won numerous awards and has exhibited internationally at Galerie Peter Sillem in Frankfurt, Galerie Siniya 28 in Marrakech, Gulf Photo Plus in Dubai, PhotoLondon, 1:54 Contemporary African Art Fair, the Lianzhou Photo Festival in China, the Stedelijk Museum Schiedam in the Netherlands, the Katzen Museum of Art in Washington DC, the New Orleans Museum of Art, and the Benton Museum of Art at Pomona College. Alia also serves on the board of Clockshop in Los Angeles, California.

Alia Ali lives and works in Los Angeles and Marrakech, and is currently in residency at the Roswell Artist-in-Residence Program (RAiR) in Roswell, New Mexico.