Weapons Lobbies = Endless Wars - All Over the World! 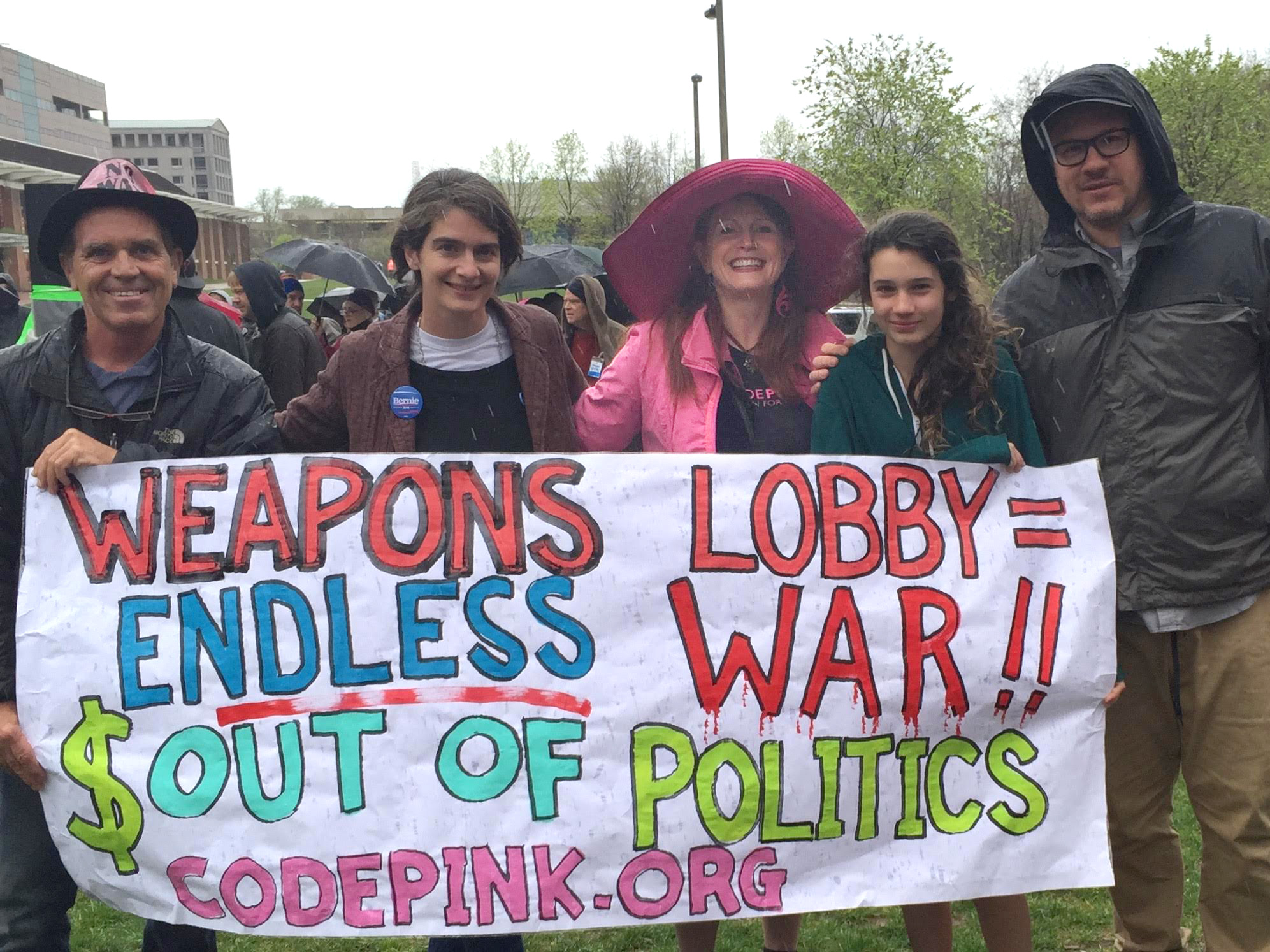 Those opposed to wars and militarism frequently decry military conflict as “senseless” or say, “no one benefits.” One of the few Congress members to vote against the U.S. entering what we now call “World War I,” Montana representative Jeannette Rankin famously said, “You can no more win a war than you can win an earthquake.”

But a close examination of war, or what President Obama and other members of the government-media Establishment tend to call “military strategy”, show that these conflicts are NOT senseless to the elite that DOES, in fact, benefit enormously. Last year, the nation-states of Planet Earth spent $1.676 TRILLION on war and preparation for war; the United States accounted for $596 billion of that. Weapons manufacturers, military contractors, and surveillance firms, assisted by their shills on K Street, Capitol Hill and Hollywood, rake in our tax dollars and turn them into private profit.

The Global Days of Action on Military Spending, a two-week period of actions and public education, offered CODEPINK and our allies an opportunity to point out these harsh realities, in the context of Democracy Spring’s mobilization against the corrupting influence of money on our government. Actions took place all over the world; please take a look at some of them.

The military-industrial complex, which has penetrated every congressional district in the U.S., supports many well-paid lobby firms; the Chertoff Group, run by former Department of Homeland Security director Michael Chertoff, of Hurricane Katrina infamy, is one example. Congress does not have a “Rights of Children” Caucus, but it does have a bipartisan, 46-member Unmanned Systems Vehicles (AKA Drones) Caucus, whose events CODEPINK has protested.

CODEPINK intern Rebecca Green details the sinister effects of the so-called “defense” industry in her recent article “This industry is literally making a killing.”

“Big money in politics drives grave inequality in our country. It also drives war. After all, war is a profitable industry. While millions of people all over the world are being killed and traumatized by violence, a small few make a killing from the never-ending war machine.”

Global Days of Action on Military Spending, or GDAMS started as a single day of action in 2011, co-organized by International Peace Bureau and the Institute for Policy Studies. The catalyst for GDAMS was and is the release each April of “Trends in World Military Spending” by the Stockholm International Peace Research Institute. Year after blood-soaked year, this report shows the United States spends by far the most on any military in the world, though tax dollars lavished on the Pentagon are down from their peak in 2010.

Our shared wealth could have been spent responding to the real existential threat that hangs over us all: global climate change. But another record-breaking year of heatwaves, desperate migrations, rising seas and new health threats like the Zika virus came and went - and still much more money went to death and destruction than to creating a cooler  for world for our children, as Lisa Savage points out in her report back on a GDAMS action in Portland, Maine.

Along with our allies, CODEPINK organized or helped to organize numerous actions on U.S. Tax Day, the final day of the two-week action period. In Washington, D.C., we marched, protested, held a teach-in with Chris Hedges and (some of us, anyway) got arrested.

Perhaps the most important trend in worldwide military spending? That Saudi Arabia, though one of the smaller nations in terms of population, is now the THIRD biggest military spender in the world, surpassing Russia. The Saudi monarchy buys its jets, missiles, landmines (!!) and much more from the United States. Lockheed Martin and Boeing are among the main beneficiaries of Saudi spending. Please view this video of a discussion on Saudi Arabia’s foreign policy from CODEPINK’s recent Saudi Summit to hear about the devastating effects in Bahrain and Yemen.

One thing you can do to continue the push to educate the public and slow the fire-hose-like flow of money to weapons makers which is then used to lobby our decision makers. The failed and massively over-budget F-35 fighter project is a clear example of the corrupting influence of corporate money on government. The F-35 has been plagued by a continual succession of technical failures and project mismanagement and is currently hundreds of billions of dollars over budget while its delivery is years overdue. At multiple points in the F-35’s development, military officials have indicated a willingness to kill the project, only to be rebuffed by Congressional pressure to keep the project alive as a payback to their military contractor donors. The final cost of the project is estimated to be $1.45 trillion, enough to fund free college education for all U.S. citizens for the next 23 years. Download our flier and pass it out at meetings, rallies, etc. and use our sharable to spread the word online!

To paraphrase a famous quote by author and activist Alice Walker: “Only [people working for] justice can stop a curse.”