We Want It to Stop

On November 15, 2012, day three of the recent eight day bombardment of Gaza, Ahmed Basyouni and his family were watching news of the attacks on TV in their home in the eastern section of Beit Hanoun. He and his wife assured his older children that they would be safe because they lived in a calm area where there are no fighters. Two of his younger sons were asleep in the next room.  While they were talking, at approximately 10:35 pm, the Israeli Air Force fired three rockets from a U.S.-provided F-16 bomber into a nearby olive grove.  Ahmed's house rocked, all his windows shattered, electricity went out plunging the family in darkness, and Ahmed's fifteen year old son Nader screamed  from the next room that his brother was dead.

When Ahmed went into the room, he saw, with horror, that it was true.  A fleck of shrapnel from the rocket had killed his youngest son, eight year-old Fares Basyouni.  Fares had been completely decapitated but for a strip of flesh from the side of his face. The child’s blood covered the ceiling, the walls and the floor.

Fares’s father and mother spoke softly about their murdered son. “He was a kind boy, sometimes naughty,” said Ahmed, “but very kind.”  Fares’s mother told us that he was crazy about food.  He would finish his breakfast and announce that he was ready for seconds.  And he loved to play.  Once he completed his homework, he was ready for games.  “He was the life of the house,” the father added. “Now the home seems so quiet.”

Across the road, the home of Jamal Abdul Karim Nasser is uninhabitable.  The ruins of the home face directly onto the missile crater.  Young relatives explained to us that shrapnel from the missiles had killed Odai Jamal Nasser, age 15.  We were standing on the edge of the crater when Odai’s brother Hazem, age 20, asked us into what remained of his home.

The missile explosions had shattered every window, and done extensive damage to walls and floors.

Hazem and his family had been sleeping in a hallway, so as to be safer from attack, when suddenly the house was falling down on top of them.  “My father’s arm and head were bleeding,” said Hazem, “and he was looking for a flashlight to check on the children.”  Hazem’s mother took the two youngest sons out of the house and headed for their uncle’s home. Hazem’s father suddenly realized that the son sleeping next to him, Hazem's brother Odai, was dead.  Hazem's other younger brother, Tareq, started crying out for help and then lost consciousness.  After calling for an ambulance Hazem's father began heading for the nearby mosque to seek help.  But the mosque was ablaze.  They waited ten agonizing minutes for the firemen to arrive.  The moment the firemen arrived, so did another rocket, injuring several of the first responders.

Only after Tareq was safely at the hospital did Hazem’s father dare tell his mother that her son Odai was dead. The burial was the following day.

“Our area was safe,” said Hazem, “and we couldn’t imagine that this would happen.  It was very strange.  No one could believe that the Israelis would target our area.” He paused before adding, “They want to clear everything.”

This memory will always be with Hazem.  “I will remember what happened to my brother and my house and that will affect my choices in the future.”  He asked us to tell this story to others. “Ask them to look at our suffering and how we are slaughtered every day,” he urged, speaking softly.

Outside the home, as we spoke, young men had arrived with a donkey, a cart, and plastic buckets.  They were filling the buckets with chunks of debris from the Nasser’s front yard and dumping the buckets into the cart before refilling them.  They estimated it will take a week to clear all of the wreckage and debris that surrounds the Nasser home and covers every floor inside.

We asked the young workers, most of whom were relatives of the Nasser family, and most of whom had known Fares Basyouni, if they had any messages they’d like us to convey to people who might see the photos we’d taken or read our account of what happened to this neighborhood on November 15th.

Mohamed Shabat, age 24, who hopes one day to become a journalist, quickly replied:  “We want to stop the killing of Palestinians.” 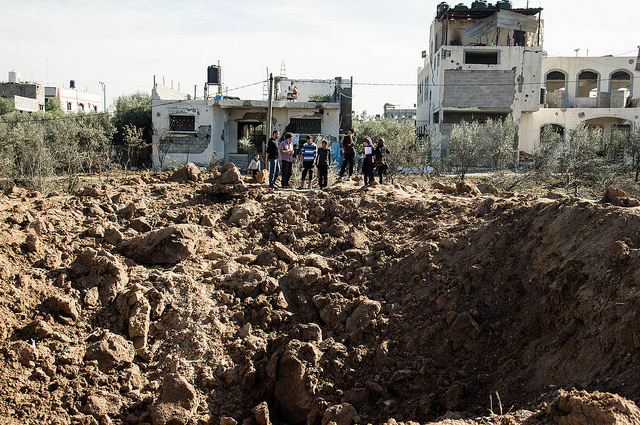