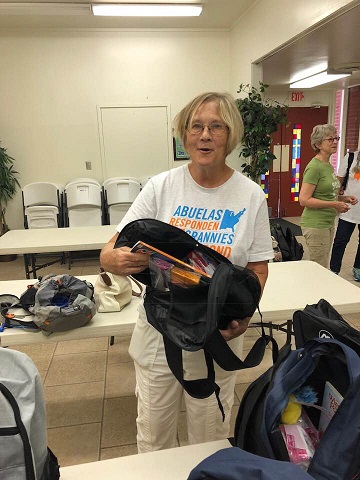 We helped fill backpacks at the Presbyterian Church in Harlingen Texas for people awaiting an opportunity to come across to the US at the border crossings in Matamoros -- Brownsville.

Backpacks are also given to people coming out of the detention facilities arriving by bus and dumped at the bus stations in McAllen, in Brownsville, awaiting tickets to go on to their sponsors' homes around the country.

A wonderful network of Spanish-speaking volunteers meet every bus from the detention facilities at the Greyhound bus stations and help sort out tickets, calls to sponsors and a variety of other issues that pop up after people are coming out of detention and not knowing really where they are or whether they have tickets waiting for them!

While we were talking to families from Honduras, Guatemala, Cuba and Brazil on the Mexico side of the border who are awaiting a determination from ICE that they can come into the US and immediately to a detention center, a mammoth rainstorm hit, dumping at least two inches of water in 15 minutes, flooding the streets and pounding on the blue tarps that were strung between the fence and the sidewalk. Then the intense sun came out and humidity skyrocketed as the rainwater dried up.

Mexico Red Cross showed up asking if anyone needed shelter -- Mexican volunteers bring food to those waiting on the bridge. The Red Cross workers said that even waiting at the bridge can be dangerous as gangs of human traffickers have kidnapped persons at the bridge and held them for ransom money.