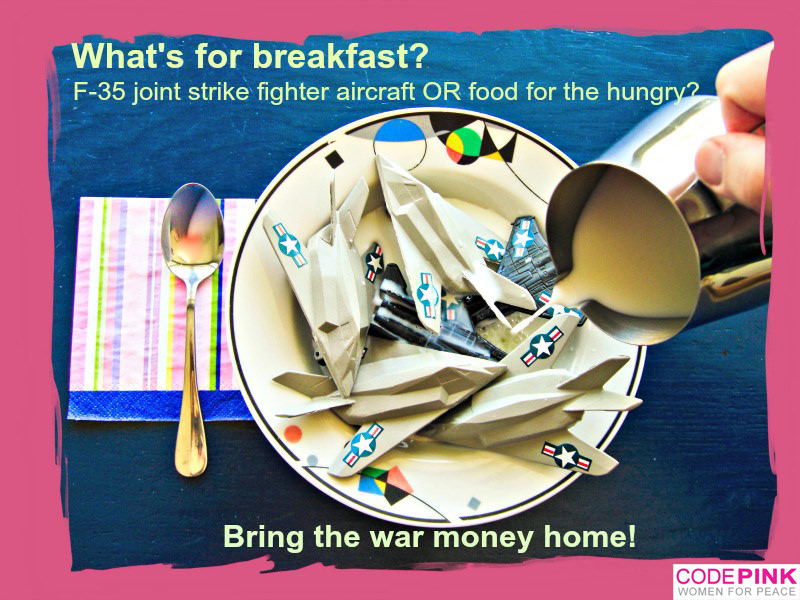 Today, on the Global Day of Action against Military Spending, conscious people around the world take a long, hard look at how much of our shared wealth goes into military spending - the stealth fighter jets and the drones, the troops and the officers, the bases on land and the satellites in the stratosphere, the nukes and the literal nuts and bolts - and then help spread the information in the yearly report by the Stockholm International Peace Research Institute.

The United States is the world’s biggest spender on the military - by a huge margin.  Even as the American public says “the wars are winding down”, military spending continues to consume over 55% of the federal discretionary budget - what’s left over after obligatory spending on Social Security and Medicare.

As IVAW member and combat veteran Aaron Hughes testified at a panel discussion on the 11th “anniversary” of the U.S. war on Iraq: “We ARE at war. The drones, the special operations, JSOC, the mercenaries…” In addition to direct military involvements and approximately 1000 overseas military bases, the U.S. also sells 75% of the weapons used in armed conflicts around the world, sometimes with “boomerang” effects to US interests.

We cannot eat weapons systems, but weapons “eat” our hard-earned taxes, even as austerity-pushers such as Rep Paul Ryan advocate for cutting food stamps and other much-needed social programs. To take only one measure of unmet needs in the richest country in the world: “Currently, 49 million Americans, including 8.3 million children, suffer from food insecurity, according to the most recent USDA estimates.”

The United States was not always this way, and it doesn’t have to be this way. Let’s get the word out. In the San Francisco Bay Area where I live, people from a wide coalition of peace, faith, and political groups - including CODEPINK -- will be handing out info on military spending to morning commuters at 30 BART (light rail) stations: We call ourselves the New Priorities Campaign, because that’s what we are advocating for.

This morning I’ll be traveling from one BART station to another, sending out photos and quotes via twitter, then livetweeting from the press conference where a staffer for Congresswoman Barbara Lee will speak. This dedicated co-founder of the Congressional Out of Poverty Caucus recently published an op-ed in USA Today, “Bring all our troops home.” Barbara Lee still speaks for me - and many!

Janet Weil is a longtime CODEPINK-er who responds to general information inquiries, and works on the Bring Our War $$ Home campaign as well as supporting other CODEPINK national campaigns. Based in the San Francisco Bay Area, Janet is also a co-founder of the SF 99% Coalition and tweets from @wardollarshome and @sf99percent.