"We're sorry for the massive disruption it's caused their lives. There's no one who wants this over more than I do. I would like my life back." —BP CEO Tony Hayward, on the oil spill disaster that claimed 11 lives and has since spewed 20 to 100 million gallons of toxic oil into the Gulf of Mexico, May 31, 2010

Let's rewind back to April 9, 2003, three weeks after the U.S. invasion of Iraq where everyday life for the average Iraqi would change forever. British Petroleum (BP) developed and introduced a team to acquire Iraqi oil, which was led by then chief executive of exploration and production Tony Hayward. Now let's fast forward to January 2007, Hayward is appointed Chief Executive of BP and wins the biggest Iraqi oil contract in '09.

Life turns for the worse in the Gulf of Mexico after the explosion of the BP-operated Deepwater Horizon oil rig. 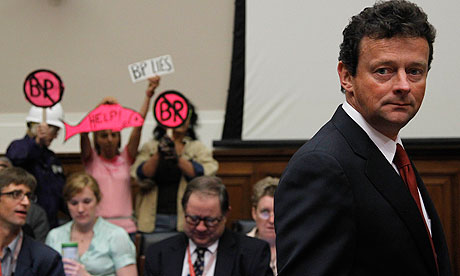 Livelihoods destroyed, wildlife destroyed and sea life destroyed forever. On June 17th, Hayward delivers an uncompassionate testimony in front of the U.S. House Committee on Energy and Commerce where he was disrupted by CODEPINK cofounder and Texas fisherwoman Diane Wilson. As Wilson was escorted out of the room she called for the criminal arrest of Tony Hayward.

The next day, Hayward steps down from the day-to-day oversight of the Gulf oil spill.

Tony still works for BP where he plans to launch a phony campaign against the wave of criticism against him and the oil spill. While he's busy doing that, many who continue to suffer from BP's destructive profiteering will struggle to get their lives back.