"I confess I had no desire to die in a Southeast Asian rice paddy. I considered the war in Vietnam already lost." - Bolton on why he decided to avoid the draft 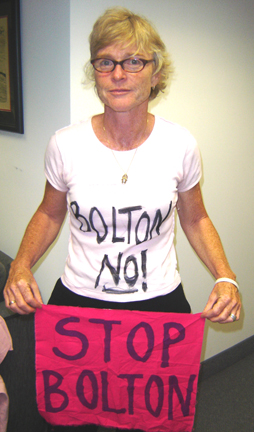 Vietnam draft dodger and former US ambassador to the UN John Bolton is scheduled to speak tonight at the Denver Marriot City Center.

He was a key player in leading the U.S. into the war in Iraq by creating false claims that Iraq was trying to obtain uranium "yellowcake" from Niger. He conjured up other claims about Syria having a nuclear weapons program which would bring instability to the Middle East as well as insane accusations that Cuba had a biological warfare program. He's stated US air strikes on Iran would be a major step towards victory in winning the war in Iraq.

Bolton is skeptical of the entire category of international law and argues that it cannot ever be accepted as superior to US domestic law. During his nomination hearings, 67 former top U.S. diplomats, State Department officials, and staffers of the Arms Control and Disarmament Agency sent a letter to Congress stating the reasons for their opposition to the appointment.

John Bolton should be arrested as a crazed neoconservative on the loose creating delusional scenarios to take the United States into battle.