War Criminal of the Week: Condoleezza Rice!
By Nancy Mancias

Any time you have a situation in which you are calling for more time rather than calling for Iraq to immediately comply, it plays into the hands of Saddam Hussein. ~Condoleezza Rice

In her roles as National Security Adviser and Secretary of State, Condoleezza Rice along with the rest of the Bush Administration created an imaginary scenario that Iraq and Saddam Hussein were responsible for the attacks on the World Trade Centers in New York City on September 11, 2001. Leading the U.S into the illegal invasion of Iraq killing millions of innocent Iraqis along with over 4000 U.S. Soldiers.

Condi approved and apologized for numerous war crimes on behalf of the Bush Administration, using visions of mushroom clouds and other scare tactics. She also allowed torture to displace diplomacy as the hallmark of the US foreign policy. Employing circuitous logic and Nixonian explanations, Rice recently explained away our misunderstandings about torture and international obligations: "By definition, if it was authorized by the president, it did not violate our obligations in the Convention Against Torture."

While the Gulf Coast was suffering from the wrath of Hurricane Katrina and lack of aid from the Bush Administration, blase Rice decided to go on a brief vacation to New York where she played backhand with Monica Seles, caught a Broadway show and spent several thousands of dollars at the Ferragamo on 5th Avenue. A fellow shopper inside the shop, went up to Rice and shouted, “How dare you shop for shoes while thousands are dying and homeless!"

On October 25, 2007, Rice attended a U.S. Congressional hearing on developments in the Middle East, but as she entered the room CODEPINK activist Desiree Fairooz peacefully approached her with blood-colored hands in her face and shouted "war criminal." 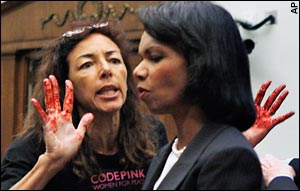 Since leaving the White House, Rice has returned to prestigious Stanford University as a political science professor. She was confronted and grilled by students on torture, interrogation and extraordinary rendition.

As out-of-touch Rice readies herself for a grand performance with Aretha Franklin and the Philadelphia Orchestra at The Mann Center of the Performing Arts, the U.S is still reeling from the foreign policy discord she created as Secretary of State.