War Criminal of the Week: Back to School with Robert Delahunty

War Criminal of the Week: Back to School with Robert Delahunty
By Nancy Mancias

Robert Delahunty was a Bush legal lackey who helped re-write the United States rules of engagement in a post-9/11 world. While working in the Department of Justice, Delahunty co-wrote legal opinions on interrogation, detention and extraordinary rendition with his partner in crime John Yoo.

As the Bush administration launched its war on terror, the U.S. detention facility at Guantanamo Bay, Cuba was in preparation to house "enemy combatants." Men and young boys were wrongfully picked up by bounty hunters in Afghanistan and disappeared to the prison as members of al Qaeda and Taliban. Since 2002, prisoners undergone torture from the Joint Task Force guards who were in direct supervision of the U.S Southern Command based in Miami, Florida. After years of being held at the detention facility, prisoners were released without any explanation of their unlawful detainment from the previous or current administrations.

In 2006, CODEPINK sponsored a delegation to protest the Guantanamo Prison in Guantanamo, Cuba. 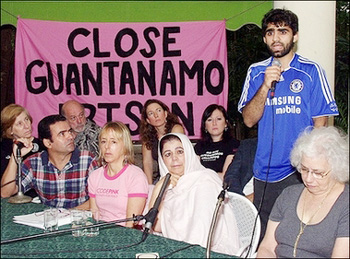 Delegation member Asif Iqbal, a 25-year-old British citizen, was held in extrajudicial detention, as a terror suspect. Iqbal and his friends Ruhal Ahmed and Shafiq Rasul were captured in November 2001 in Afghanistan and then taken to Guantanamo. Known as "The Tipton 3" because the three young men are from Tipton, England, they were all released on March 9, 2004 with no charges.

Meanwhile Robert Delahunty moves on with his life, walking freely through the streets of Minneapolis-St. Paul readying himself for his first day of school at the prestigious University of St. Thomas School of Law.