War Criminal of the Week: Back to School with John Yoo

War Criminal of the Week: Back to School with John Yoo
by Nancy Mancias

Click for video news coverage from KTVU of UC Berkeley protest against John Yoo (lots of Code Pinkers were on the scene!)


In light of the Abu Ghraib prison scandal, critics are arguing that abuses of Iraqi prisoners are being produced by a climate of disregard for the laws of war. - John Yoo

John Yoo was Bush's Top Legal Lackey in helping to create the construct for torture. As Deputy Assistant Attorney General of the Office of Legal Counsel, John Yoo signed off on the legal opinions purporting the use of torture was legal as a part of the president's vast wartime powers. These legal opinions are most commonly referred to as the Torture Memo and have been a source of controversy and redesign of executive power.

In 2004, images of naked and hooded innocent Iraqis who had been raped and tortured by U.S. soldiers and private military contractors at Abu Ghraib prison were released for the world to see. The unruly bunch conducting the torture were working above the law and eventually were held accountable in court but for those senior Bush officials who were making the decisions, pulling the strings and asking their lawyers such as John Yoo to experiment and rewrite the rules of engagement in a post-9/11 world no justice and accountability has been served.

Yoo has been under investigation by the Justice Department's Office of Professional Responsibility who has been critical of his work.

It's been six years since the Abu Ghraib scandal and John Yoo now enjoys a cushy position at one of the most respected law schools in the country - UC Berkeley. Not bad for a man whose legal reasoning stirred an international outrage because of its inaccuracy and self-serving commitment to ideology over law.

Last year, CODEPINK, students and community activists went to his first class of the school year. 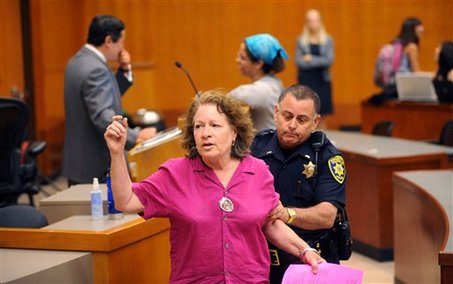 The activists were ejected from the classroom and escorted out by campus police.

Yoo is scheduled to teach a class on Constitutional Law for the 2010 fall semester and opponents of his work will be ready for school again.