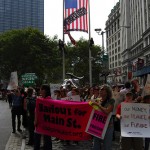 Gotta love tourists. What began as a relatively mild, 60-person crowd of CODEPINK women, Rainforest Action Network folks and others protesting the bailout today near the Wall St. charging bull statue boomed into an incredible brouhaha when tourists blanketing the area were totally tickled and bug-eyed by the action.  They snapped photo after photo of the protesters chanting "We pay, we own, foreclose Wall Street, not my home!" and "No deal for Wall Street, new deal for Main Street!" But they really went bananas when two Rainforest Action Network members scaled the flag poles sandwiching the bull and, in a meticulous hour-long production, hoisted an American flag emblazoned with "Foreclosed?" Because of the gawking crowd, police blockaded part of each road straddling the plaza.

Then reporters and photographers appeared out of nowhere; one New York Times reporter said he'd been writing a story nearby about dwindling restaurant tips when he passed the rally, saw the scalers and busted out his notebook to cover it. (And he wrote this great piece here). Tons of passerby working in nearby offices came down, too, saying they were happy we came out and that they agreed with the madness of the blank-check bailout, a theft of taxpayer's dollars.

About a half an hour after the RAN folks put up the flag, set up a ladder to escort them down.

Now if only tourists could storm the Senate and inspire a no vote?