By David Swanson | Reposted from War is A Crime.org

The future will be here in April and Code Pink: Women for Peace has already won it (thus answering President Obama's State of the Union call to "win the future"). The color coded threat warnings our government has been bombarding us with since shortly after September 11, 2001, will be gone. The fear-mongering tactic that Code Pink was named in mockery of will have been mocked right out of existence. 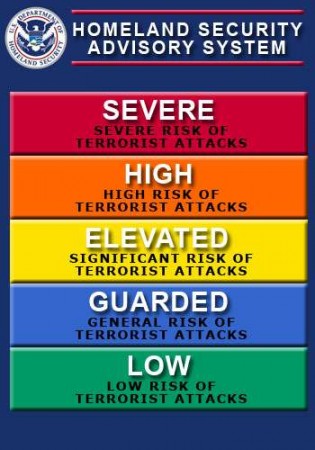 To listen to the corporate media, Code Pink cannot be taken seriously because decorum and politeness are universal values of a much higher order than peace or justice. (Code Pink has been known to disrupt a formal event or two, in addition to all its other work advocating for peace.) But that sort of snobbish mockery has nothing on Code Pink's power to afflict the comfortable in the process of comforting the afflicted. Code Pink has gone from being ignored, to being laughed at, to being attacked, to being agreed with on matters of war and peace by two-thirds of the country.

It is something else entirely that cannot be taken seriously -- and increasingly has not been taken seriously: the moronic and insulting color coded threat level warnings. Announcing that they will cease to exist is effectively to remind us that they once did. These meaningless warnings are announced incessantly but have faded into the background along with advertisements and campaign promises: nobody notices. (And of course it's hard to notice while you're being scared by the new techniques of pat-downs and porno-scans.) The Code Yellow and Code Orange propaganda aids to the terrorists are scheduled to be phased out over the next 90 days, but their involuntary phasing out began almost 9 years ago when what was at first a small group of Americans had the presence of mind to make fun of them rather than obediently calibrating fear levels as instructed.

Homeland Security Secretary Janet Napolitano is scheduled to announce the demise of the already dead and rotting colored threats on Thursday in what she is calling the "first annual State of America's Homeland Security address." I sincerely hope that Code Pink holds a first annual state of the fatherland's insecurity dress contest or something of the sort. Because, the fear mongering is not going to end, and whatever the color codes are replaced with could be subtler but more effective; and therefore Code Pink cannot end either -- even if its name has served its purpose.

Code Pink: Women for Peace has about 100 chapters and hundreds of thousands of members, many of them recruited through national Code Pink's creative communication of inspiring and amusing resistance to the very serious business of frightening people into supporting evil policies. Nothing cures fear like laughter, and nothing brings laughter like the joyful and irreverent interruption of self-important stupidity.

Al Qaeda and terrorism are concepts that promise at least cameo appearances in many a State of the Union address to come. The threat of global terrorism has an advantage over the communist threat in that it can never be proven to have ceased to exist. And yet, with enough disruption of the patterns of thought our government seeks to impose on us, and with enough reversal of the terrorism-generating policies with which our government opposes terrorism, these threats too -- just like the color codes -- can be phased out.

We can stop being afraid. We can refuse to become obedient. We can refuse to stop questioning. We can embarrass officials who promote bigotry and hatred. But we can't do it without leadership. We can't win the future or anything else without the unrelenting activism of people of principle who refuse to be corrupted or intimidated or to place the value of tranquility in congressional hearings above peace in every part of the earth.

The elimination of the fear colors is symbolic of a deeper success, and yet it is only a beginning. We are not yet holding national days of courage or generosity. Fear and hostility are still the dominant notes in our political posture toward the world. 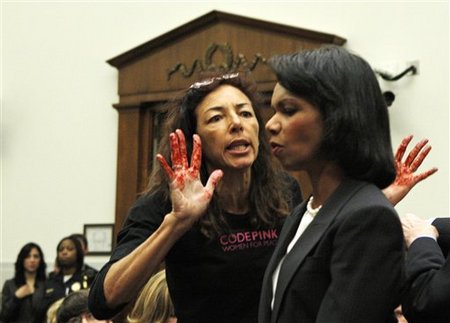 But much of the world knows that not all Americans back their government's abuses, and a lot of that awareness has been generated by Code Pink. I lived in Italy when the United States was loved and returned when it was hated, but I returned with a Code Pink member, Desiree Fairooz, who had been on the front page of newspapers around the world holding bloody hands up to Condoleezza Rice. We were loved because of Desiree's action, I assure you.

Serious and solemn strategists will tell you that holding red hands up to an official's face discredits you and hurts your cause. I will tell you that in this case it restored a measure of international trust and friendship to our troubled nation.