Tell Congress to keep militarism and xenophobia out of the USICA!

Congress is wasting trillions of U.S. taxpayer dollars on beefing up an already overinflated military budget to escalate war on China as they scramble to pass the Build Back Better Act! CODEPINK needs your help to Cut the Pentagon budget, end militarism at home and abroad, and stop aggression toward China and Asian/Asian Americans!

The latest package of legislation Congress is trying to push through to ramp up the U.S. hybrid war on China is the U.S. "Innovation" and Competition Act of 2021 (USICA), sponsored by Senator Chuck Schumer. The USICA is a Frankenstein-like combination of several targeted anti-China bills—including the Endless Frontier Act, the Strategic Competition Act of 2021, and the Meeting the China Challenge Act—into a single, monstrous 2,276-page bill. (In comparison, it’s only a couple hundred pages shy of the Build Back Better Act, which is 2,466 pages). Now House Speaker Nancy Pelosi and Senate Majority Leader Chuck Schumer are trying to push this bill through Congress as quickly as possible. We can't let that happen!

Contact Congress today to urge them to keep $10.8 B for the military and racist, McCarthyist provisions out of the USICA before it goes to a vote! 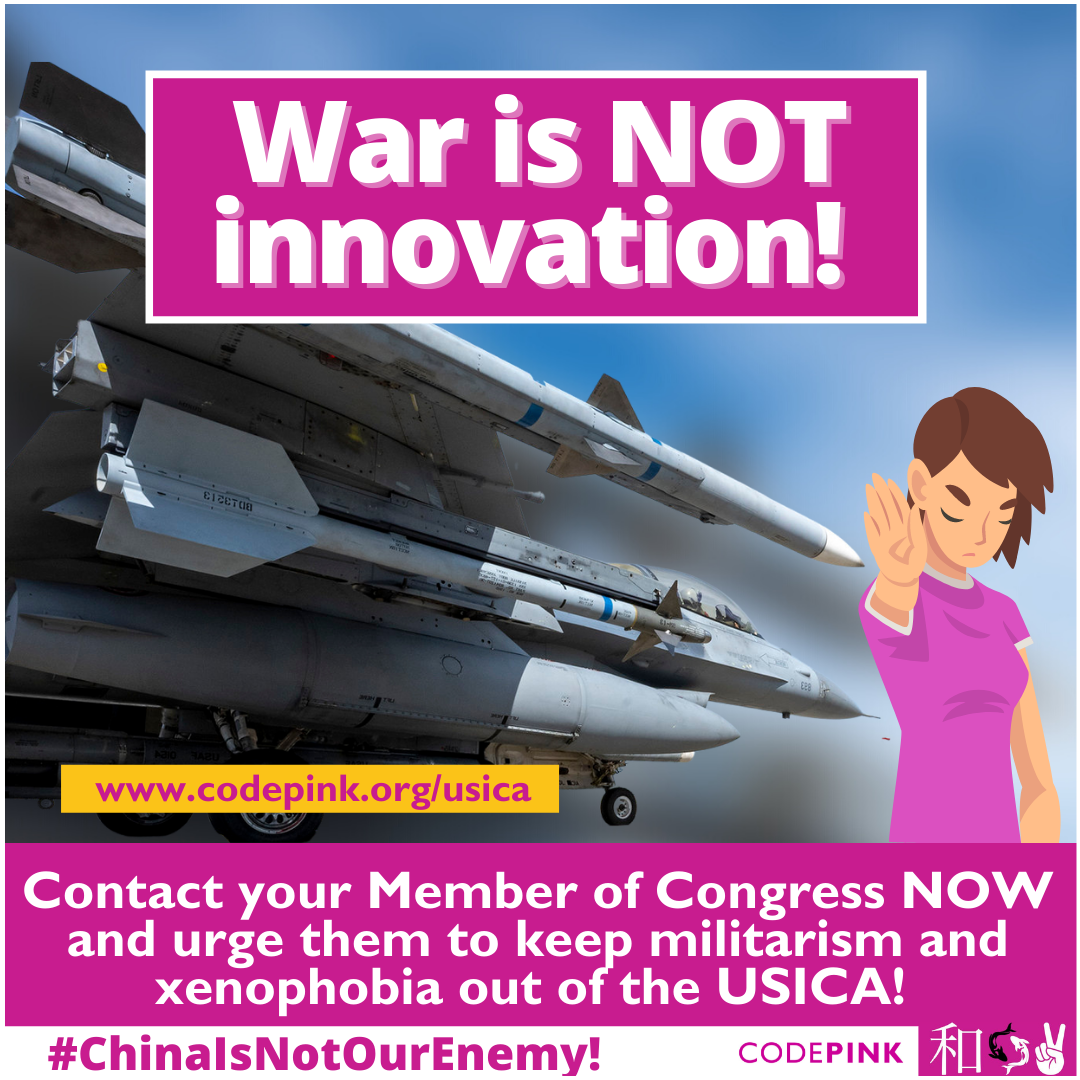 Although Congress and media pundits have been framing the bill as a necessary investment in technology and research, which would potentially ease supply chain pains with the CHIPS Act, they fail to mention that the USICA also includes an overblown renewed pivot to Asia and recommitment of military resources to the Asia-Pacific for the multi-domain U.S. hybrid war on China.

In its current form, the bill would also prioritize excess missile and weapons transfers to ASEAN partners and increase joint force military exercises with the Quad alliance. The USICA will squander even more of our tax dollars for the U.S.'s next forever war, dangerously increase the risk of a nuclear war with China, and contribute further to climate devastation through increased U.S. military emissions.

Call or write your Congress Member today to prevent the USICA from allocating over $10.8 B for the military and inciting more domestic racism against Asian & Asian Americans!

Just last month, President Biden held a virtual meeting with President Xi Jinping and claimed that “the U.S. has no intention to have a conflict with China” and is seeking to increase dialogue and reduce miscommunications. According to a White House readout on the meeting, the United States is committed to the “One-China” policy and “strongly opposes unilateral efforts to change the status quo or undermine peace and stability across the Taiwan Strait.”

Yet the USICA is a setup for war and conflict with China, in particular over the status of Taiwan. The USICA’s Sec. 3213 “Enhancing the United States-Taiwan Partnership” states that Taiwan is “a vital national security interest of the United States” and commits the U.S. to regular weapons, command control, and missile transfers, as well as the training of Taiwanese troops. Increase of sophisticated arms sales to Taiwan is in violation of the "One-China" policy and the Three Communiqués.

Alarmingly, the USICA would further fuel the dangerous climate of xenophobic, racist, and McCarthyist surveillance of Chinese students and researchers in the U.S. through provisions about “Security Concerns” at universities. The bill's whopping $500 M for Sinophobic and anti-China propaganda through the U.S. Agency for Global Media, which includes known CIA propaganda cutout Radio Free Asia, would also risk inciting more violence against Asians & Asian Americans in the United States.

War is NOT innovation! Keep militarism and xenophobia out of the USICA. Contact your Member of Congress NOW!

Madison, Jodie, Lauren, the CODEPINK China Is Not Our Enemy campaign, and CODEPINK

P.S. We have so much planned for 2022! Invest in peace now to make sure we can implement these plans together.

P.P.S. Read the full text of the USICA in its current form here. International supporters can read more and share to spread the word about the dangers of the USICA!