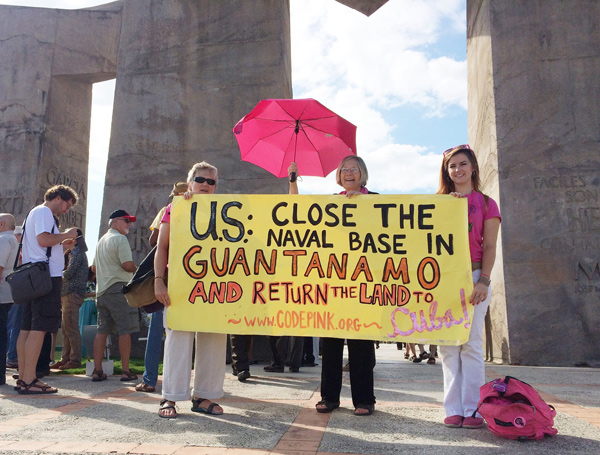 The conference is held in Guantanamo, Cuba, the site of one of the most contentious U.S. military bases, the U.S. Naval Base that had houses the notorious military prison that since January, 2002 has incarcerated 779 persons for alleged ties to al Qaeda, the Iraq insurgency and other activities designed as “terrorist” by the U. S. government.  With the most recent release of five prisoners this week to the UAE, the prison now holds 107 prisoners, 47 of whom have been cleared for release by the U.S. government years ago and 46 that the U.S. has decided are so dangerous that they will be imprisoned indefinitely without charge or trial.

The delegation from CODEPINK: Women for Peace has 60 participants, Witness Against Torture 15 delegates and United National Anti-War Coalition has 10 delegates.  165 international delegates attended the 2014 conference.

Presentations from international delegates include “U.S. Military Bases in Central and South America and the Caribbean” by retired US Army Reserve Colonel and former US diplomat Ann Wright.

About the Author:  Ann Wright served 29 years in the U.S. Army/Army Reserves and retired as a Colonel.  She was a U.S. diplomat for 16 years and served in U.S. Embassies in Nicaragua, Grenada, Somalia, Uzbekistan, Kyrgyzstan, Sierra Leone, Micronesia, Afghanistan and Mongolia.  She resigned from the U.S. government in March, 2003 in opposition to President Bush’s war on Iraq.