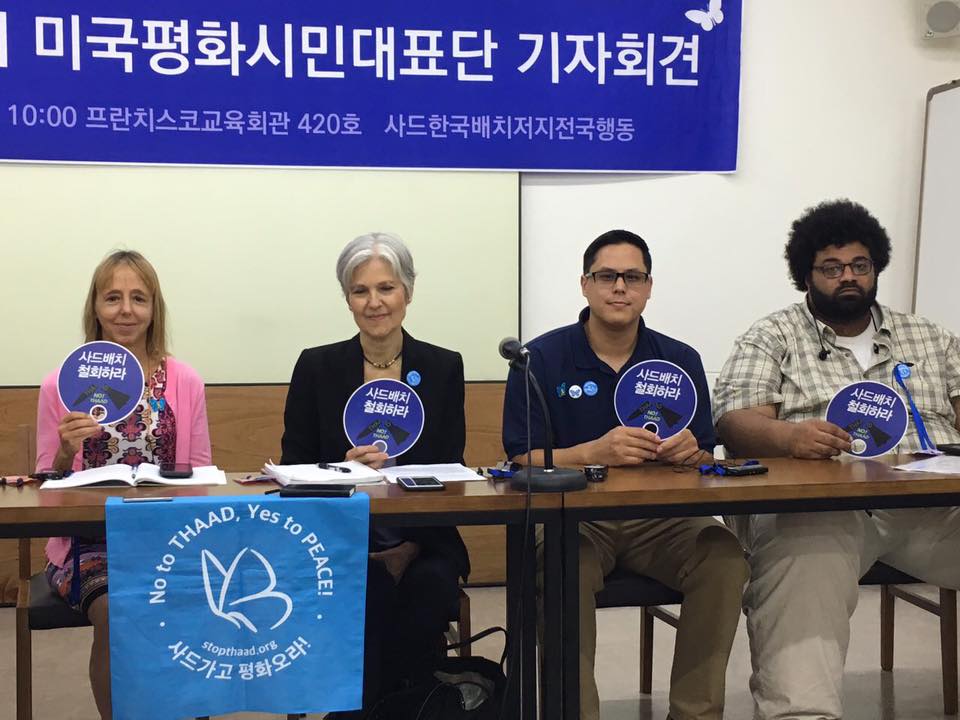 Medea Benjamin with Will Griffin and Reece Chenault at a Press conference in Seoul opposing THAAD.

Touching down in Washington DC Friday night after a peace delegation to South Korea organized by the Task Force to Stop THAAD in Korea (STIK), I saw the devastating news. No, it was not that Reince Priebus had been booted from the dysfunctional White House. It was that North Korea had conducted another intercontinental ballistic missile test, and that the United States and South Korea had responded by further ratcheting up this volatile conflict.

The response was not just the usual tit-for-tat, which did happen. Just hours after the North Korean test, the US and South Korean militaries launched their own ballistic missiles as a show of force. Even more incendiary, however, is that South Korean President Moon Jae-in also responded by reversing his decision to halt deployment of the US weapon system known as THAAD (Terminal High Altitude Area Defense). President Moon gave his military the green light to add four more launchers to complete the system.

South Korea’s new, liberal president came into office on May 10 on the wave of a remarkable “people power” uprising that had led to the impeachment and jailing of the corrupt President Park Geun-hye. Part of the legacy that Moon inherited was an agreement with the US to provide land and support for THAAD, a missile defense system designed to target and intercept short and medium-range missiles fired by North Korea.

THAAD is controversial on many fronts: military experts say it doesn’t work; environmentalists say it emits dangerous radiation; national assembly members say it was never submitted for a vote; China says the radar is aimed at them and has responded with economic sanctions; and the local residents of Seongju, where the system is placed, are furious that their tranquil lives have been pierced by a billion dollar Lockheed-Martin weapon system they were never consulted about.

Our delegation—composed of former Green Party presidential candidate Jill Stein, Reece Chenault of US Labor Against the War, Will Griffin of Veterans for Peace and myself—had the opportunity to visit Seongju, a farming town 135 miles southeast of the capital, and the neighboring town of Gimcheon. The feisty residents, including women farmers in their eighties, have been protesting every single day for the past year. We attended a rally with thousands, which concluded with a symbolic smashing of a cardboard version of THAAD, and a candlelight vigil that takes place in both towns every night, rain or shine. The villagers have blockaded the roads to prevent entry of the launchers, fought with police, publicly shaved their heads in opposition, and set up a 24/7 protest camp. They are joined by the local Won Buddhists, who consider the THAAD site their sacred ground.

It was the resilience of Seongju and neighboring Gimcheon residents that pushed the Moon administration to pause the deployment process until a thorough environmental impact assessment had been completed, which would have taken about a year. This gave the villagers hope that they would have time to convince President Moon to rethink and reverse the THAAD agreement altogether. The president’s recent decision will only spark more local outrage.

The North Korean nuclear program is certainly alarming, as are the myriad human rights violations of that repressive regime. But the question is how best to de-escalate the conflict so that it doesn’t explode into an all-out nuclear war. Adding another weapon system into the mix is not the answer.

The North Korean regime feels encircled. It knows that the most powerful nation in the world, the United States, wants to overthrow it. There’s Trump’s belligerent rhetoric: “If China is not going to solve North Korea, we will." There’s the ever-tightening screws of sanctions. Just a few hours before the latest North Korean missile test, Congress approved yet another round of sanctions to squeeze the North.

There are 83 US military bases on South Korean soil and US warships often patrolling the coast. US-South Korean military exercises have been getting larger and more provocative, including dropping mock nuclear bombs on North Korea. The US military also announced that it would permanently station an armed drone called Gray Eagle on the Korean Peninsula and it has been practicing long-range strikes with strategic bombers, sending them to the region for exercises and deploying them in Guam and on the peninsula.
The United States has also long held a “pre-emptive first strike” policy towards North Korea. This frightening threat of an unprovoked US nuclear attack gives North Korea good reason to want its own nuclear arsenal.

North Korea’s leadership also looks at the fate of Iraq’s Saddam Hussein and Libya’s Muammar Gaddafi, leaders who gave up their nuclear programs, and conclude that nuclear weapons are their key to survival.

So the North Korean leadership is not acting irrationally; on the contrary. On July 29, the day after the test, North Korean President Kim Jong-un asserted that the threat of sanctions or military action “only strengthens our resolve and further justifies our possession of nuclear weapons.”

Given the proximity of North Korea to the South’s capital Seoul, a city of 25 million people, any outbreak of hostilities would be devastating. It is estimated that a North Korean attack with just conventional weapons would kill 64,000 South Koreans in the first three hours.

A war on the Korean Peninsula would likely draw in other nuclear armed states and major powers, including China, Russia and Japan. This region also has the largest militaries and economies in the world, the world’s busiest commercial ports, and half the world’s population.

Trump has few options. His Defense Secretary Jim Mattis has warned that a pre-emptive strike on the North’s nuclear and missile capabilities could reignite the Korean War. Trump had hoped that Chinese President Xi Jinping could successfully rein in Kim Jong-un, but the Chinese are more concerned about the collapse of North Korea’s government and the chaos that would ensue. They are also furious about the deployment of THAAD in South Korea, convinced that its radar can penetrate deep into Chinese territory.

But the Chinese do have another proposal: a freeze for a freeze. This means a freeze on North Korean missile and nuclear tests in exchange for a halt on US-South Korean war games.

The massive war games have been taking place every year in March, with smaller ones scheduled for August. A halt would alleviate tensions and pave the way for negotiations. So would halting the deployment of the destabilizing THAAD system so disliked by South Korean villagers, North Koreans and the Chinese.

Given the specter of nuclear war, the rational alternative policy is one of de-escalation and engagement. President Moon has called for dialogue with the North and a peace treaty to permanently end the Korean War. North Korean diplomats have raised the possibility of a “freeze for a freeze.” Time has proven that coercion doesn’t work. There’s an urgent need to hit the reset button on US-Korean policy, before one of the players hits a much more catastrophic button that could lead us into a nuclear nightmare.

Medea Benjamin is an author and cofounder of the peace group CODEPINK.