URGENT: Call now to stop the war in Yemen 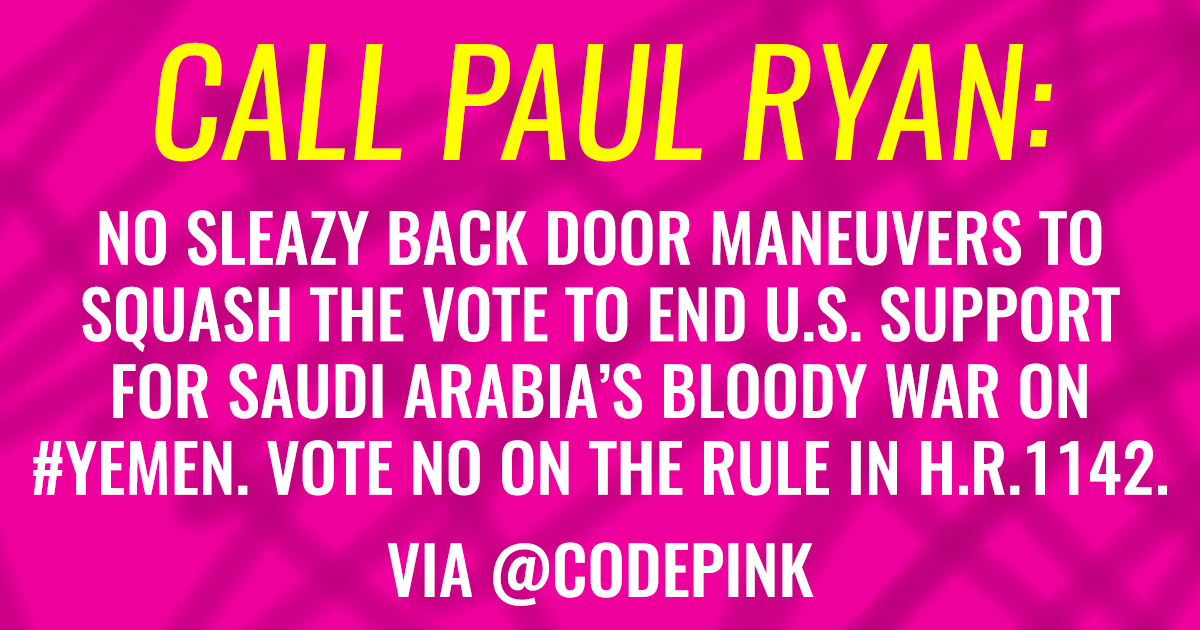 URGENT: Your action is needed immediately. Republicans in the House are acting today to try to squash H.Con.Res.138 that would end U.S. support for the Saudi-led war in Yemen. Call Representative Paul Ryan and tell him he has no right to remove our right to a vote.

The tide on Yemen has been turning in a big way - we recently announced we will stop refueling Saudi warplanes — and congressional champions for peace, like Representative Ro Khanna, now have a real chance to win the vote on H.Con.Res.138, which would invoke the War Powers Act to end all U.S. support for Saudi Arabia’s bloody war. But the Rules Committee has slipped a provision into H.R.1142 that would stop the vote on H.Con.Res.138, a shady backdoor maneuver that would stop the vote on ending the war in Yemen.

The House will decide today on H.R.1142, that would squash our vote. Call Rep. Ryan now and demand he vote NO on H.R.1142. Let us have a chance to end the Saudi war on Yemen.

Thousands of Yemenis have already died and 14 million are on the brink of starvation. Thanks to U.S. support, Saudi Arabia and the UAE have been bombing hospitals, school buses and the port of Hodeidah, blocking lifesaving food and medicine. Last month, the horrific murder of journalist Jamal Khashoggi threw an international spotlight on the criminal actions of Saudi Arabia, including their bombing campaign in Yemen, and why the U.S. should not support such a repressive regime.

We cannot let Paul Ryan and his war-loving cronies take away our opportunity to end U.S. support of this brutal war. Call Ryan’s office now!

We have a very real chance to win both resolutions in the House AND the Senate in the coming weeks to end U.S. support for the Saudi-led war on Yemen — but only if we can stop this undemocratic attempt to squash H.Con.Res.1138