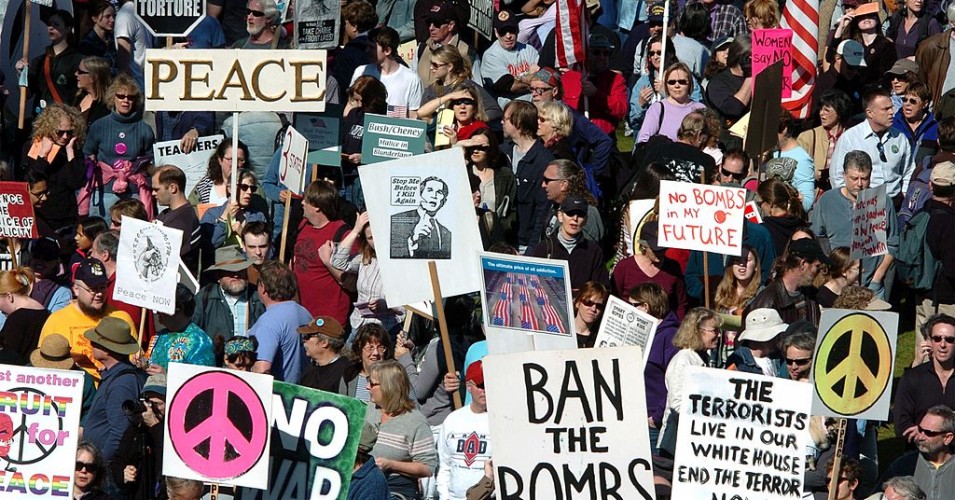 When the pandemic is over, let’s insist that the U.S. honor the UN Charter’s prohibition against the threat or use of force, which wise American leaders drafted and signed in 1945, and start living at peace with all our neighbors around the world. (Photo by Greg Wahl-Stephens/Getty Images)

If we can give up war during a pandemic, why can’t we just give it up altogether? In which devastated country would you like the U.S. to start fighting and killing again when the pandemic is over? Afghanistan? Yemen? Somalia? Or would you prefer a brand new U.S. war against Iran, Venezuela or Ambazonia?

At least 70 countries have signed on to the March 23 call by UN Secretary General Antonio Guterres for a worldwide ceasefire during the Covid-19 pandemic. Like non-essential business and spectator sports, war is a luxury that the Secretary General says we must manage without for a while. After U.S. leaders have told Americans for years that war is a necessary evil or even a solution to many of our problems, Mr. Guterres is reminding us that war is really the most non-essential evil and an indulgence that the world cannot afford—especially during a pandemic.

The UN Secretary General and the European Union have also both called for a suspension of the economic warfare that the U.S. wages against other countries through unilateral coercive sanctions. Countries under unilateral U.S. sanctions include Cuba, Iran, Venezuela, Nicaragua, North Korea, Russia, Sudan, Syria and Zimbabwe.

In his update on April 3rd, Guterres showed that he was taking his ceasefire call seriously, insisting on actual ceasefires, not just feel-good declarations. “…there is a huge distance between declarations and deeds,” Guterres said. His original plea to “put armed conflict on lockdown” explicitly called on warring parties everywhere to “silence the guns, stop the artillery, end the airstrikes,” not just to say that they would like to, or that they’ll consider it if their enemies do it first.

But 23 of the original 53 countries that signed on to the UN’s ceasefire declaration still have armed forces in Afghanistan as part of the NATO coalition fighting the Taliban, while Qatar and the UAE are part of the Saudi-led coalition fighting in Yemen. Have all 25 countries ceased firing now? To put some meat on the bones of the UN initiative, countries that are serious about this commitment should tell the world exactly what they are doing to live up to it.

In Afghanistan, peace negotiations between the U.S., the U.S.-backed Afghan government and the Taliban have been going on for two years. But the talks have not stopped the U.S. from bombing Afghanistan more than at any other time since the U.S. invasion in 2001. The U.S. has dropped at least 15,560 bombs and missiles on Afghanistan since January 2018, with predictable increases in already horrific levels of Afghan casualties.

There was no reduction in U.S. bombing in January or February 2020, and Mr. Guterres said in his April 3rd update that fighting in Afghanistan had only increased in March, despite the February 29th peace agreement between the U.S. and the Taliban.

Then, on April 8th, Taliban negotiators walked out of talks with the Afghan government over disagreements about the mutual prisoner release called for in the U.S.-Afghan agreement. So it remains to be seen whether either the peace agreement or Mr. Guterres’ call for a ceasefire will lead to a real suspension of U.S. airstrikes and other fighting in Afghanistan. Actual ceasefires by the 23 members of the NATO coalition who have rhetorically signed on to the UN ceasefire would be a big help.

The diplomatic response to Mr. Guterres’s ceasefire declaration from the United States, the world's most prolific aggressor, has mainly been to ignore it. The U.S. National Security Council (NSC) did retweet a tweet from Mr. Guterres about the ceasefire, adding, “The United States hopes that all parties in Afghanistan, Syria, Iraq, Libya, Yemen and elsewhere will heed the call of @antonioguterres. Now is the time for peace and cooperation.”

But the NSC tweet did not say that the U.S. would take part in the ceasefire, essentially deflecting the UN's call to all the other warring parties. The NSC made no reference to the UN or to Mr. Guterres position as UN Secretary General, as if he launched his initiative just as a well-meaning private individual instead of the head of the world’s foremost diplomatic body. Meanwhile, neither the State Department nor the Pentagon have made any public response to the UN’s ceasefire initiative.

So, unsurprisingly, the UN is making more progress with ceasefires in countries where the U.S. is not one of the leading combatants. The Saudi-led coalition attacking Yemen has announced a unilateral two week ceasefire beginning on April 9th to set the stage for comprehensive peace talks. Both sides have publicly supported the UN ceasefire call, but the Houthi government in Yemen will not agree to a ceasefire until the Saudis actually halt their attacks on Yemen.

If the UN ceasefire takes hold in Yemen, it will prevent the pandemic from compounding a war and humanitarian crisis that have already killed hundreds of thousands of people. But how will the U.S. government react to peace moves in Yemen that threaten the U.S.’s most lucrative market for foreign arms sales in Saudi Arabia?

In Syria, the 103 civilians reported killed in March were the lowest monthly death toll in many years, as a ceasefire negotiated between Russia and Turkey in Idlib appears to be holding. Geir Pedersen, the UN’s special envoy in Syria, is trying to expand this to a nationwide ceasefire between all the warring parties, including the United States.

In Libya, both the main warring parties, the UN-recognized government in Tripoli and the forces of rebel general Khalifa Haftar, publicly welcomed the UN’s call for a ceasefire, but the fighting only worsened in March.

In the Philippines, the government of Rodrigo Duterte and the Maoist New People’s Army, which is the armed wing of the Philippines Communist Party, have agreed to a ceasefire in their 50-year-old civil war. In another 50-year civil war, Colombia’s National Liberation Army (ELN) has responded to the UN’s ceasefire call with a unilateral ceasefire for the month of April, which it said it hopes can lead to lasting peace talks with the government.

In Cameroon, where minority English-speaking separatists have been fighting for 3 years to form an independent state called Ambazonia, one rebel group, Socadef, has declared a two-week ceasefire, but neither the larger Ambazonia Defense Force (ADF) rebel group nor the government have joined the ceasefire yet.

The UN is working hard to persuade people and governments everywhere to take a break from war, humanity’s most non-essential and deadly activity. But if we can give up war during a pandemic, why can’t we just give it up altogether? In which devastated country would you like the U.S. to start fighting and killing again when the pandemic is over? Afghanistan? Yemen? Somalia? Or would you prefer a brand new U.S. war against Iran, Venezuela or Ambazonia?

We think we have a better idea. Let’s insist that the U.S. government call off its airstrikes, artillery and night raids in Afghanistan, Somalia, Iraq, Syria and West Africa, and support ceasefires in Yemen, Libya and around the world. Then, when the pandemic is over, let’s insist that the U.S. honor the UN Charter’s prohibition against the threat or use of force, which wise American leaders drafted and signed in 1945, and start living at peace with all our neighbors around the world. The U.S. has not tried that in a very long time, but maybe it's an idea whose time has finally come.

Nicolas J.S. Davies is the author of Blood On Our Hands: the American Invasion and Destruction of Iraq. He also wrote the chapters on "Obama at War" in Grading the 44th President: a Report Card on Barack Obama’s First Term as a Progressive Leader.