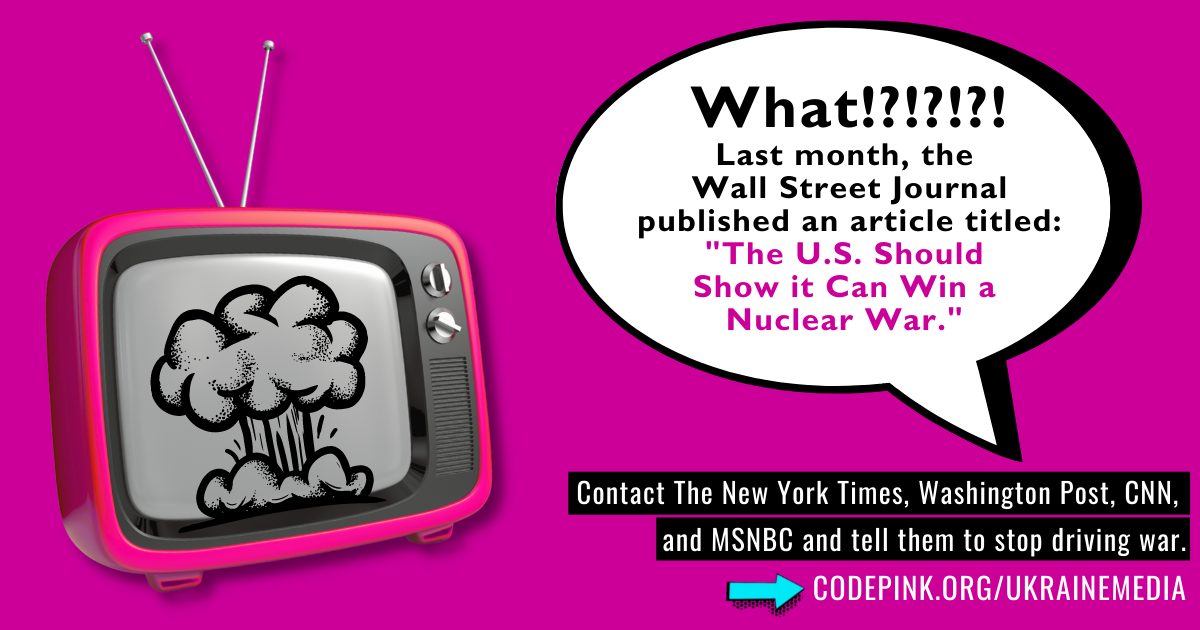 Where are the media calls to the masses for peace?  We must demand they stop cheering on the killing of people and publish and platform plans for peace.

I am reaching out to plead with you to stop beating the drums of war. The stakes of the U.S.-Russia proxy war in Ukraine are literally nuclear. Last month, the Wall Street Journal published an article titled: ‘The U.S. Should Show it can Win a Nuclear War.’ What!?!?!?! This kind of crazy thinking must be debunked, but you are too busy campaigning for more weapons for more war — all the way to nuclear apocalypse.

Peacemakers and peace plans must be published and platformed!
The war in Ukraine rages on, and the war mentality, driven by you the media, generates momentum to keep it going, and even escalate, the bodies pile up. The threat of famine looms over many countries ordinarily supplied with grain by Ukraine or Russia. The risk of nuclear apocalypse grows. The impediments to positive action for the climate are strengthened. Militarization expands.

Here is what you should be encouraging the U.S. to do:
— Agree to lift sanctions if Russia keeps its side of a peace agreement.
— Commit humanitarian assistance to Ukraine instead of more weapons.
— Rule out further escalation of the war, such as a “no-fly zone.”
— Agree to end NATO expansion and commit to renewed diplomacy with Russia.
— Fully support international law.

In a recent U.S. poll, almost 70% were concerned that the Ukraine war could lead to nuclear war. Vladimir Putin has launched a ghastly war. Nothing could be worse. But that doesn’t mean we have to lose our ability to think straight. Rather than cheering on war, you must publish and platform calls and plans for peace.