Twitter Suspends Prominent Activist for Palestinian Rights, No Explanation Given 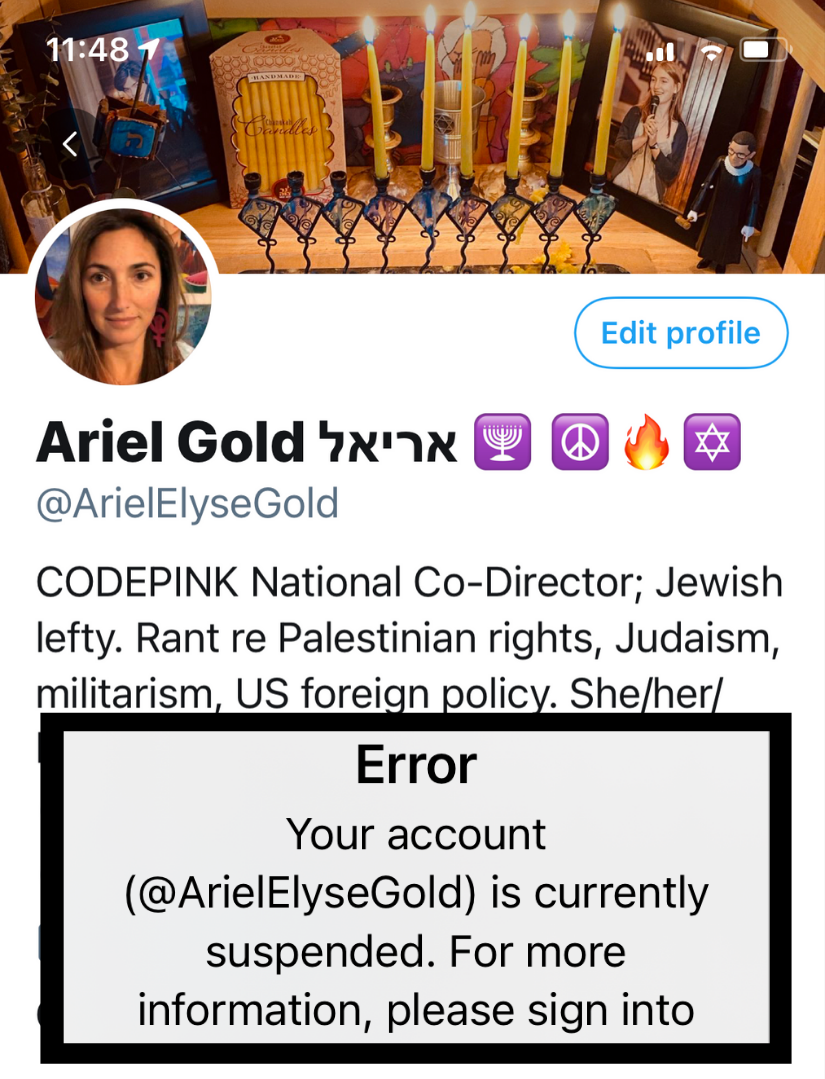 March 1, 2021 —- On February 24, 2021, Twitter suspended the account of CODEPINK co-executive director Ariel Gold, a prominent activist for Palestinian rights. The suspension follows online targeting of Ms. Gold by supporters of Israel and Twitter flagging a number of tweets by Ms. Gold and CODEPINK.

Between January 30th and February 4, Twitter began flagging tweets by Ms. Gold (@ArielElyseGold) and CODEPINK (@codepink) for allegedly violating Twitter’s rules. These “violations” included such things as Ms. Gold responding with horror to an antisemitic attack against a member of her synagogue, CODEPINK advertising a webinar regarding U.S.-Russia relations, CODEPINK mourning the extrajudicial execution of a Palestinian man, and a number of innocuous tweets (see here for screenshots of all the @arielelysegold and @codepink tweets that were flagged for violating Twitter rules).

Ms. Gold has filed numerous appeals asking Twitter why her account was suspended, but she has not received any replies.

“I’m proud to work for Palestinian rights, diplomacy with Iran, freedom for Saudi women, and against all wars and all forms of racism, and these are not issues that Twitter should censor,” said Ms. Gold. “While I hope Twitter reinstates my account, no social media suspension will stop me from working to end Israeli apartheid, the war in Yemen, and other overt violations of human rights and international law.”

Ms. Gold has long been targeted on Twitter and through other forms of communication with hate speech and threats of violence for her criticism of Israel. On September 6, 2020, she received a death threat on Twitter that she reported to Twitter and the FBI. The FBI followed up on it, determining that the man lived in Israel. Twitter has continued to allow the man to maintain his account on their platform.

In addition to the targeting of Ms. Gold and CODEPINK’s accounts, on February 23, 373 Twitter accounts associated with Armenia, Russia, and Iran were suspended. According to Twitter, a number of these account suspensions were for “undermining faith in the NATO alliance and its stability.” CODEPINK does not think that Twitter should be in the business of supporting a military alliance, must less censoring peace activists.

On Sunday, February 28, CODEPINK launched a petition calling on Twitter to reinstate Ms. Gold’s account and stop targeting activists for Palestinian rights and demilitarization. The petition has already received thousands of signatures.

CODEPINK is a women-led grassroots organization working to end U.S. wars and militarism, support peace and human rights initiatives, and redirect our tax dollars into healthcare, education, green jobs, and other life-affirming programs.