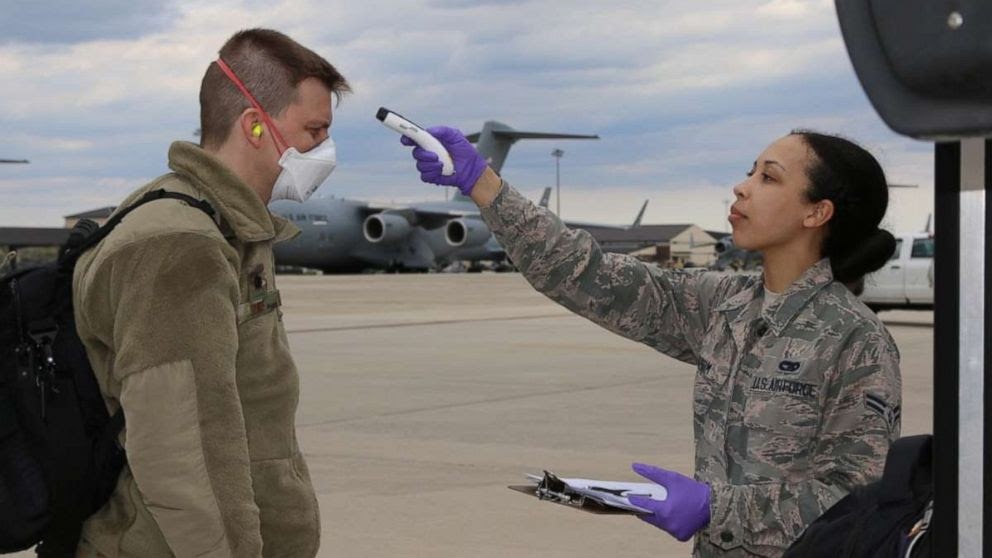 As of May 1, there were 7,145 cases of COVID-19 in the US military, with more falling sick every day. Credit: Military Times

As President Trump has complained, the U.S. does not win wars anymore. In fact, since 1945, the only 4 wars it has won were over the small neocolonial outposts of Grenada, Panama, Kuwait and Kosovo. Americans across the political spectrum refer to the wars the U.S. has launched since 2001 as “endless” or "unwinnable" wars. We know by now that there is no elusive victory around the corner that will redeem the criminal futility of the U.S.'s opportunistic decision to use military force more aggressively and illegally after the end of the Cold War and the horrific crimes of September 11th. But all wars have to end one day, so how will these wars end?

As President Trump nears the end of his first term, he knows that at least some Americans hold him responsible for his broken promises to bring U.S. troops home and wind down Bush's and Obama's wars. Trump’s own day-in-day-out war-making has gone largely unreported by the subservient, tweet-baited U.S. corporate media, but Trump has dropped at least 69,000 bombs and missiles on Afghanistan, Iraq and Syria, more than either Bush or Obama did in their first terms, including in Bush’s invasions of Afghanistan and Iraq.

Under cover of highly publicized redeployments of small numbers of troops from a few isolated bases in Syria and Iraq, Trump has actually expanded U.S. bases and deployed at least 14,000 more U.S. troops to the greater Middle East, even after the U.S. bombing and artillery campaigns that destroyed Mosul in Iraq and Raqqa in Syria ended in 2017. Under the U.S. agreement with the Taliban, Trump has finally agreed to withdraw 4,400 troops from Afghanistan by July, still leaving at least 8,600 behind to conduct airstrikes, “kill or capture” raids and an even more isolated and beleaguered military occupation.

Now a compelling call by UN Secretary General Antonio Guterres for a global ceasefire during the Covid-19 pandemic has given Trump a chance to gracefully deescalate his unwinnable wars - if indeed he really wants to. Over 70 nations have expressed their support for the ceasefire. President Macron of France claimed on April 15th that he had persuaded Trump to join other world leaders supporting a UN Security Council resolution backing the Secretary General’s call. But within days it became clear that the U.S. was opposing the resolution, insisting that its own “counterterrorism” wars must go on, and that any resolution must condemn China as the source of the pandemic, a poison pill calculated to draw a swift Chinese veto.

So Trump has so far spurned this chance to make good on his promise to bring U.S. troops home, even as his lost wars and ill-defined global military occupation expose thousands of troops to the Covid-19 virus. The U.S. Navy has been plagued by the virus: as of mid-April 40 ships had confirmed cases, affecting 1,298 sailors. Training exercises, troop movements and travel have been cancelled for U.S.-based troops and their families. The military reported 7,145 cases as of May 1, with more falling sick every day.

The Pentagon has priority access to Covid testing, protective gear and other resources, so the catastrophic shortage of resources at civilian hospitals in New York and elsewhere are being exacerbated by shipping them all over the world to 800 military bases, many of which are already redundant, dangerous or counter-productive.

Afghanistan, Syria and Yemen were already suffering from the worst humanitarian crises and most compromised health systems in the world, making them exceptionally vulnerable to the pandemic. The U.S.’s defunding of the World Health Organization leaves them in even worse straits. Trump's decision to keep U.S. troops fighting America's long lost wars in Afghanistan and other war-zones only makes it more likely that his presidency may be tainted by indelible images of helicopters rescuing Americans from embassy rooftops. The U.S. Embassy in Baghdad was purposely and presciently built with a helipad on the ground to avoid duplicating the U.S.'s iconic humiliation in Saigon - now Ho Chi Minh City.

Meanwhile, nobody on Joe Biden’s staff seems to think the UN’s call for a global ceasefire is important enough to take a position on. While a credible accusation of sexual assault has sabotaged Biden's main message that "I'm different from Trump," his recent hawkish rhetoric on China likewise smacks of continuity, not contrast, with Trump's attitudes and policies. So the UN’s call for a global ceasefire is a unique chance for Biden to gain the moral high ground and demonstrate the international leadership he likes to brag about but has yet to show off during this crisis.

For Trump or Biden, the choice between the UN ceasefire and forcing America’s virus-imperilled troops to keep fighting its long lost wars should be a no-brainer. After 18 years of war in Afghanistan, leaked documents have shown that the Pentagon never had a real plan to defeat the Taliban. The Iraqi parliament is trying to expel U.S. forces from Iraq for the second time in 10 years, as it resists getting dragged into a U.S. war on its neighbor Iran. The U.S.’s Saudi allies have begun UN-mediated peace negotiations with the Houthis in Yemen. The U.S. is no closer to defeating its enemies in Somalia than it was in 1992. Libya and Syria remain mired in civil war, 9 years after the U.S., along with its NATO and Arab monarchist allies, launched covert and proxy wars against them. The resulting chaos has spawned new wars in West Africa and a refugee crisis across three continents. And the U.S. still has no viable war plan to back up its illegal sanctions and threats against Iran or Venezuela.

The Pentagon’s latest plan to justify its obscene demands on our country’s resources is to recycle its Cold War against Russia and China. But the U.S.’s imperial or “expeditionary” military forces regularly lose their own simulated war games against formidable Russian or Chinese defense forces, while scientists warn that their new nuclear arms race has brought the world closer to Doomsday than at even the most terrifying moments of the Cold War.

Like a movie studio that’s run out of fresh ideas, the Pentagon has plumped for the politically safe option of a sequel to “The Cold War,” its last big money-spinner before “The War on Terror.” But there is nothing remotely safe about “Cold War II.” It could be the last movie this studio ever makes - but who will be left to hold it accountable?

Like his predecessors from Truman to Obama, Trump has been caught in the trap of America’s blind, deluded militarism. No president wants to be the one who “lost” Korea, Vietnam, Afghanistan, Iraq or any other country that has been politically sanctified with the blood of young Americans, even when the whole world knows they should not have been there in the first place. In the parallel universe of American politics, the popular myths of American power and exceptionalism that sustain the military occupation of the American mind dictate continuity and deference to the military-industrial complex as the politically safe choice, even when the results are catastrophic in the real world.

While we recognize these perverse constraints on Trump’s decision-making, we think that the confluence of the UN ceasefire call, the pandemic, anti-war public opinion, the presidential election and Trump's glib promises to bring U.S. troops home may actually align with doing the right thing in this case.

If Trump was smart, he would seize this moment to embrace the UN’s global ceasefire with open arms; support a UN Security Council resolution to back up the ceasefire; start socially distancing U.S. troops from people trying to kill them and places where they are not welcome; and bring them home to the families and friends who love them.

If this is the only correct choice Donald Trump ever makes as President, he will finally be able to claim that he deserves a Nobel Peace Prize more than Barack Obama did.