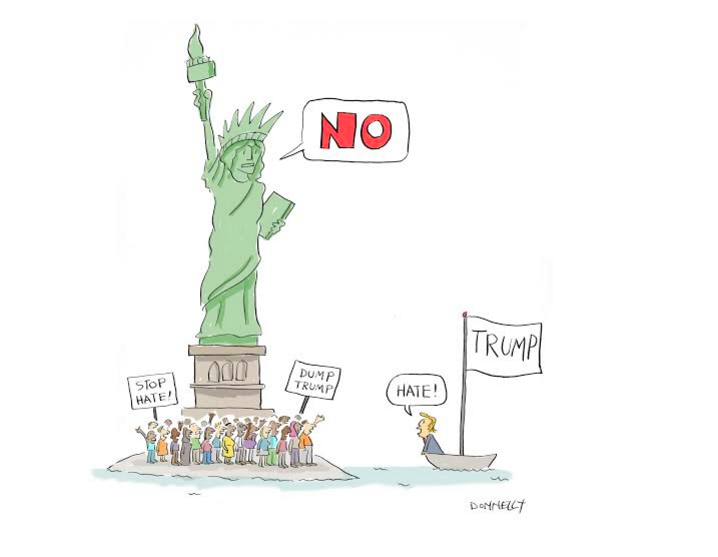 Donald Trump’s candidacy for President of the United States is an affront to human decency and I, like so many others, can no longer be silent.

His disparaging attacks on Muslims, women, immigrants, and the disabled prove time and time again that Donald Trump does not seek to serve ALL Americans in his candidacy – only the small number of people he needs to buy in order to win.

The bigoted and Islamophobic statements Trump made calling for a “total and complete shutdown of Muslims entering the United States” only serve to push the United States deeper into a military quagmire in the Middle East, and foment attacks on American Muslims. His hate-filled rhetoric is a verbally violent tool of oppression that works to alienate peace-loving Muslims in the U.S. and around the globe.

But Muslims aren’t the only demographic that Trump has targeted with his hate speech. I thought GOP candidates couldn’t get any lower than their 2012 attacks on women, but Trump has lowered the bar. A Commander-in-Chief should not believe that military rape is inevitable, but instead, work to dignify the issue and attack it at its root cause. In June of 2015, the NBC television network dumped Trump after he made horrifically derogatory comments about Mexican immigrants to the US.

Trump’s unique style of bullying and fear-mongering is the bedrock of an insidious hate-filled mentality that pollutes logic and rejects reason. We cannot trust a person to lead our country who seeks to move people through fear of others. History has shown us what happens when people fall silent in the face of this kind of hate speech and refuse to stand against it.

His supporters tout his ‘bravery’ and ‘honesty’ in saying ‘what needs to be said’, but there is no courage in spreading lies and spewing hate, and there certainly is no courage in inciting a lynch mob mentality against protesters. Unlike the more subtle and coded dog-whistle political strategy the GOP has followed since the ‘60s, Trump’s overt racism has changed the game for rhetorical strategy, leaving me to question – how is Trump paving the path for this violent, oppressive language to worsen in the future and manifest itself into public policies, both foreign and domestic?

We look to the Balkans and Rwanda for reminders of what hate can do. The hate that Donald Trump’s campaign is built on has been the driving force for war and militarism throughout history. Millions of lives have been lost because hate-filled language was taken to the extreme. Dismissing the possibilities shortcuts the path to reality – ignoring this hate is complicity in future atrocities.

Trump’s candidacy has been built on outrageousness – and he keeps one-upping himself. Like someone caught in the endless cycle of Netflix binge-watching, Americans are fixated on Trump, waiting to see what’s next instead of realizing that they’ve been watching useless garbage for far too long. The trouble is, this garbage could be the foundation of policy and executive orders. The entertainment that Trump is orchestrating and starring in – which now includes the extremist-beloved Sarah Palin – has played on for far too long.

I’m taking a stand and speaking out. Will you?

Chelsea is a political organizer and community strategist. She has trained thousands of student leaders in organizing, lobbying and advocacy skills for the betterment of public education. In 2014, Chelsea was awarded the Community Ally award from Northern Arizona Pride Association for her work advancing LGBT issues. A member of National Women's Political Caucus and a Vagina Warrior, Chelsea works towards gender equity and advocates on behalf of feminist leadership. She works with the rebel-rousers at Beautiful Trouble to coordinate a creative action training program and supports campaigns for peace and demilitarization with CODEPINK: Women for Peace. An advocate for the women's self-determination, Chelsea is passionate about intersectionality politics, capacity building, and creative engagement.