Lawyers and activists across the country including CODEPINK continue to hold former and current elected officials accountable for leading the country, and world, down a path of war and violence.

While former Vice President Dick Cheney continues to speak and sell his new book, he and his book continue to receive un-welcoming receptions. In Chicago, the Illinois Coalition Against Torture and World Can't Wait held a peaceful presence outside of his event, yet for those attending Cheney's event in Vancouver, BC, they were meet with protesters locking arms, pushing and shoving matches with police, and arrests. A Canadian immigration representative stated Cheney should not be allowed into the country because he admits to authorizing torture including against a Canadian citizen.  CODEPINK activists continue to re-shelve Cheney's new book inside local bookstores.

Former Defense Secretary Donald Rumsfeld is on the book speaking circuit too. In Boston, members of CODEPINK, Veterans for Peace and others tried to make a citizen's arrest to hold him accountable for torture and lying the country into the war with Iraq.

Activists in Minnesota greeted former President George W. Bush as he spoke in the suburban town of St. Louis Park. 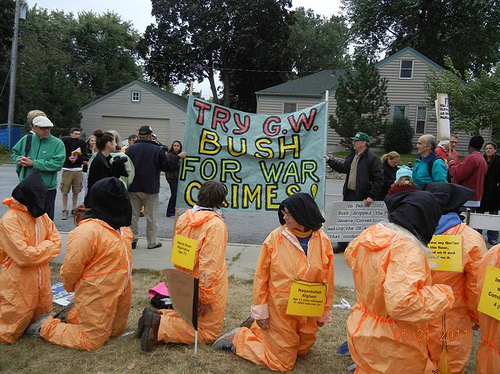 Lawyers with the Center for Constitutional Rights drafted an indictment for torture against Bush for the Attorney General in Canada. Bush is scheduled to speak in Surrey, Canada later this month.

President Obama's motorcade came through the San Francisco Bay Area. Women from World Can't Wait and CODEPINK agitated and held banners outside the gates of Moffett Air Field. His motorcade took him right past signs, chants, and an activist dressed in a "Guantanamo prisoner" jumpsuit.

In her White House press pool report, Carol Lee with the Wall Street Journal describes the demonstration.  "Some people were outside along the route from the airport to the highway, waving and snapping photos. There were also some anti-war protesters who held signs like, "Stop the wars," "The war in Afghanistan is still wrong," "Endless War" and "Afghanistan 10 years of war crimes."