I've been on a tumultuous emotional journey since the NYPD violent raided Liberty Square last week. After initially plunging into a sea of despair, my dreams of building an even better, brighter movement based on everything we've learned over the past two months buoyed me back up to the surface of hope.

Then, on Monday, I made a second attempt to salvage some of what was seized by the police in the raid. Having already wasted an entire afternoon trekking uptown to the NYC Department of Sanitation garage only to be turned away at the door, and having received plenty of warning about the difficulties of of the process from those who had actually made it inside, I set out early in the morning armed with an mp3 player and prepared to get my zen on.

Five police officers were gathered at the entrance. One searched my bag, confiscating a plastic take-out knife and a fistful of markers (lest I try to claim someone else’s property by writing my name on it, he explained) while another examined my identification. Watching him record my personal information, I couldn’t help but think of the chant I had recited so jubilantly with my fellow “day-oners” – people who had been with OWS since Sept 17th –on our one-month anniversary: “Show me what a no-fly list looks like! This is what a no-fly list looks like!” So much for not getting arrested – I was now officially on record as part of the 99%. 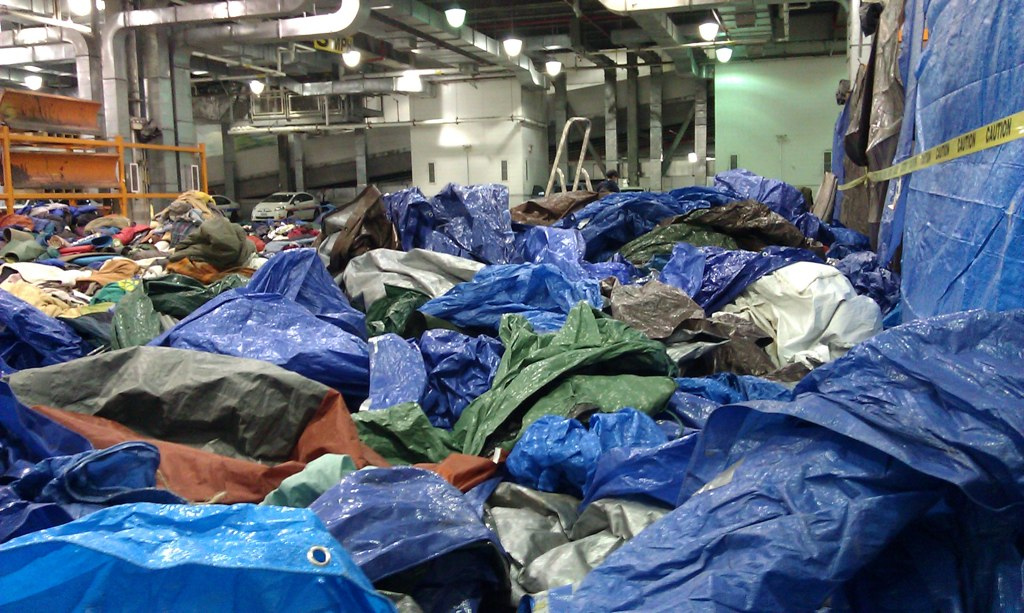 As I finally entered the space my attempted detachment gave way to sinking, sickening despair. I stood paralyzed, not wanting to believe that I was in the right place. Over thousands of square feet stretched a dismal landscape of rolling tarp hills, sleeping bag valleys, and jagged, broken-tent crevices. A lone figure waded through the rubble in the distance as police stood, arms crossed, lining the perimeter. Seemingly sensing my shock, an officer barked at me from behind a long table covered in paperwork, checked my ID again and told me I could start looking for my stuff. “Start looking,” I repeated, dazed.

I hesitated for a while longer on the periphery before cautiously approaching the wasteland of our former home. I was surrounded by flies and unpleasant smells. Personal items popped up among the ruins; an open suitcase with meticulously packed contents still intact – hard cover novel, toiletry bag, neatly rolled t-shirts; pairs of underwear; someone's bra; a wheelchair; a demolished bike; devastatingly empty bins from the People’s library with labels like “History and Revolution” and “Class War.” 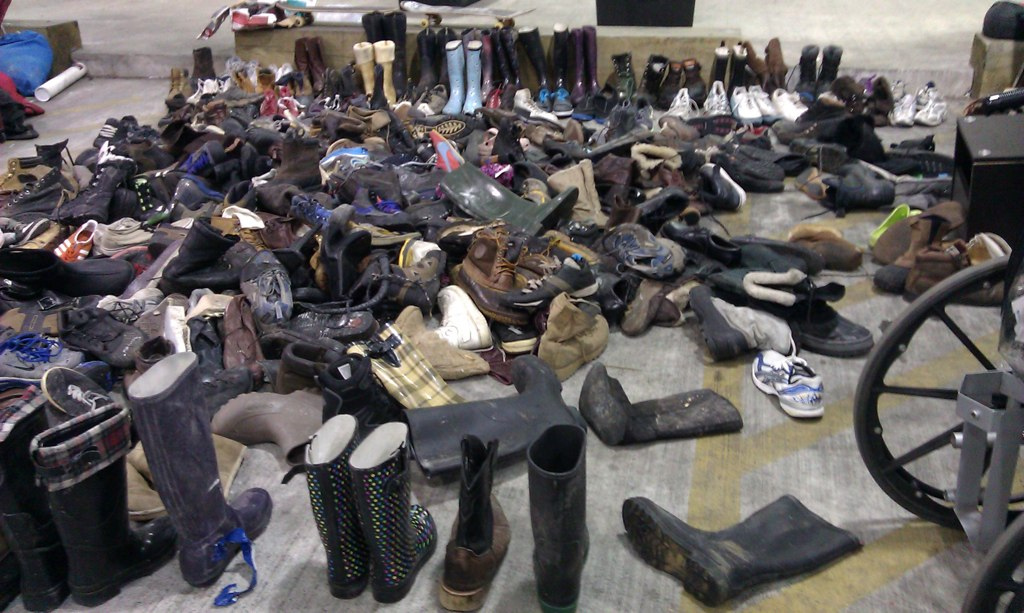 I caught my breath as I reached dozens of shoes laid out in rows, thinking immediately of CODEPINK’s “walk in their shoes” project. Where we had used the ghostly shoes to draw attention to the human cost of war, labeling each with the name and age of someone killed in Iraq, here they testified to a war on the American people. I started to wonder how much of the rubble littering my own neighborhood in Brooklyn was a result of evictions and home foreclosures. Recognizing stray pieces of my friends’ lives – a sweater I had seen someone wearing, a teddy bear blanket that once saw me through a cold night – I started to think about how, in war-torn countries, every piece of debris represents a wound inflicted on someone’s friend or family.

The more I searched, the less hope I had of ever finding what I was looking for. As I bent over to sort through a pile of deflated air mattresses, a police officer warned me “there’s vomit in there.” Just as I was about to give up, the stranger that had been silently pursuing her separate mission from afar appeared before me. We stood looking at each other for a second and then, to my surprise, she outstretched her arms. Knowing I was about to lose any shred of composure I might have had left, I hugged her. Surrounded by the dismal remains of our community, we stood embracing, bodies shaking to the unmistakable rhythm of sobbing.

When we finally collected ourselves, I started to explain: “I feel like we’re experiencing… a glimpse of what it might be like…living in…” “A war zone” – she said, finishing my sentence. “I don’t know what’s worse, how dehumanizing this whole experience is, or knowing that this kind of thing happens all the time” she added, shaking her head. “People are going to need a lot of help dealing with trauma experienced over the past week.”

Another woman arrived shortly after, looking about as stunned as I felt when I first walked in, and said to no-one in particular “I feel like I’m in a massacred graveyard.” Then my friend Embi arrived, in significantly higher spirits. She had clearly been here before and wasted no time in getting down to business – making sure everyone had gloves, explaining what went where. It was then I realized that it was only because of people like her that anyone was able to find what few things they could – she had been up there every day, bravely, patiently, sifting and sorting through the vast mess. “Oh good, someone got their beanbag” she said approvingly, referring to what looked like a random heap but was apparently a designated spot for “soft things like pillows – but not sleeping bags.”

When I eventually left, the other women were still hard at work sorting. I asked if there was anything they needed so I could tell other people who were heading up there. “Band-aids... and snacks!” Embi replied, with a huge smile.

I hugged her goodbye and felt the level tip once more -- back to hope.