This Is Not Science Fiction 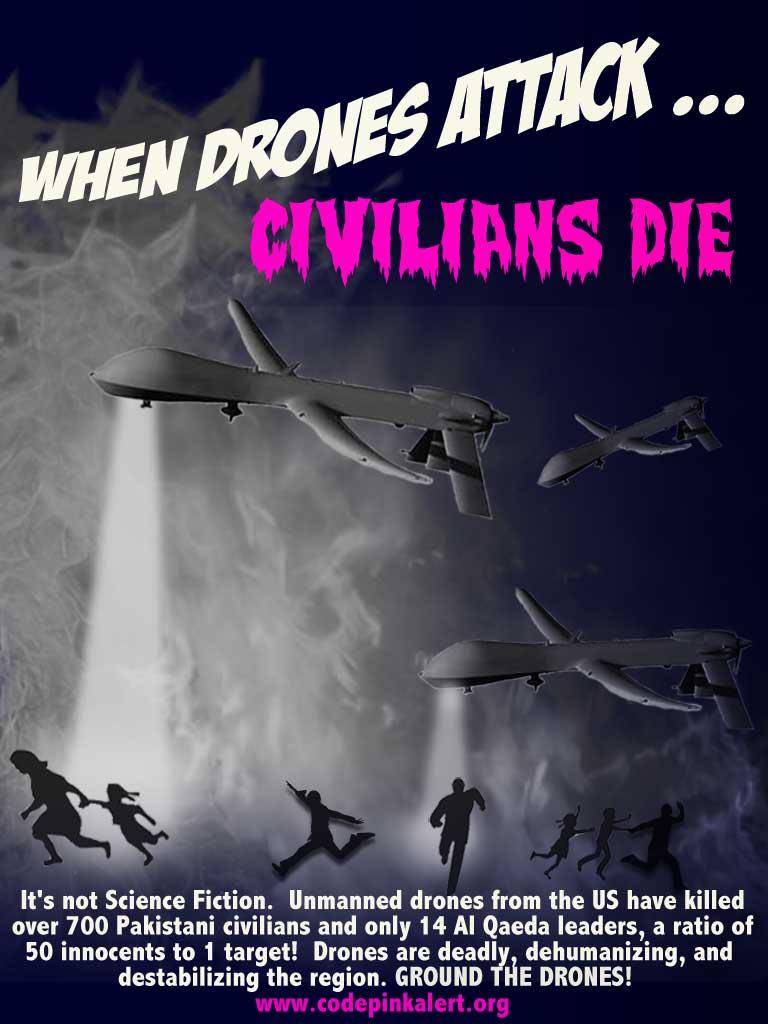 As the media continues to shine its spotlight on the death of celebrity Michael Jackson this week, so many other profound losses go unreported -- like those Afghan and Pakistani civilians killed by unmanned U.S. drones operated via remote control in the Nevada desert. Since 2006, we are told drone attacks have killed 14 Al Qaeda leaders and around 700 civilians, a 50:1 ratio of innocent victims to targeted enemies.

This week also saw the death of war criminal Robert McNamara, who lied us into war in Vietnam. He later regretted masterminding our military involvement there, but that does nothing to change the devastating losses left in its wake. And just days ago the death of seven more U.S. soldiers in Afghanistan passed without notice, continuing to highlight the futility of war and its horrific costs. Afghanistan and Pakistan are now Obama's wars, wars he will likely one day also regret. Like Vietnam, they are wrong; not good.

One of the most grotesque features of our engagements in Afghanistan and Pakistan are the use of drones. Generals and other military officials, including David Kilcullen, former adviser to General David Petraeus, have spoken out against the U.S. use of drones. "They've given rise to a feeling of anger that coalesces the population around the extremists and leads to spikes of extremism," Kilcullen testified before the House Armed Services Committee. Yet the U.S. State Department continues to deny the attacks and our tax dollars continue to fund them!

Lord Bingham, who retired last year as a senior law lord in England, said drones could follow other weapons considered "so cruel as to be beyond the pale of human tolerance" in being someday consigned to history books.  He likened drones to cluster bombs and landmines.  Human Rights Watch (HRW) has called them 'Precisely Wrong' in their report on their usage by Israel against Gaza.  As our usage of drones continues despite International outcry, attitudes towards the US are plummeting in Pakistan.

We all need to raise awareness about these inhumane, unjust military practices funded by our taxes. Next week, members of the peace movement are putting not just their words, but their bodies, on the line to stop the drones. On July 13, CODEPINK is partnering with other activists, including the courageous Franciscan monk Father Louis Vitale, to hold a "Ground the Drones!" vigil at the gates of Creech Air Force Base near Indian Springs, NV, where the drones are operated via remote control. Yes, this is not science fiction. This is how the United States of America is waging an illegal war in Pakistan, from the desert near Las Vegas.  Join them in Nevada or take action on Twitter or Facebook by sharing our new poster "When Drones Attack ..." Help us spread the word to ground the drones.