The War in Ukraine: What We Shouldn’t Forget 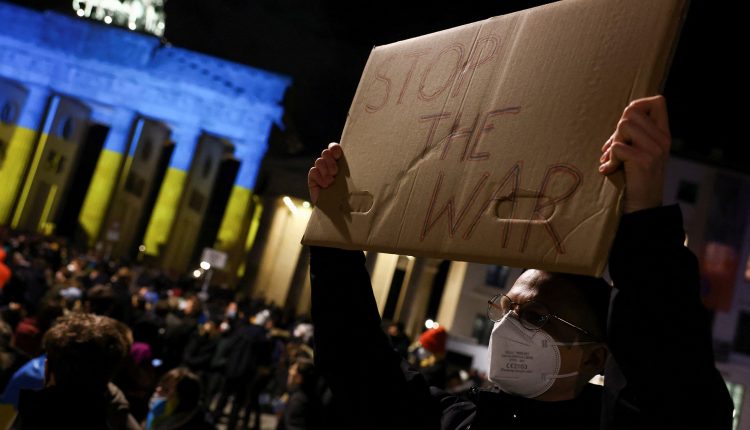 No matter how you saw the situation in Eastern Ukraine before, it is clear now that a full-scale war in Ukraine has started.

Putin did something that might have seemed incredible – just too massive – even for him.

If we are anti-war, we have to condemn this aggression, call for a ceasefire, and ask how people in Ukraine – in all of its regions – can be truly protected, under what arrangement.

But there are also two other things we have to allow ourselves to do – even if these are potentially unpopular decisions.

One, if we are for peace in Ukraine, that peace has to involve all of its regions and all of its ethnic and linguistic groups.

This means we have to acknowledge that the Eastern regions of Ukraine, too, deserve their human rights to be respected, which is something both the Russian and Ukrainian governments would have to guarantee. “Pro-Russian” doesn’t mean unworthy of a life of dignity. What are ‘separatist regions’ for some governments are still people who we have to include when we craft a new political arrangement that would allow for a transition from war into non-war.

We do know that, historically, to peacefully resolve a conflict that is a mix between an intra-state war and an inter-state war (in other words: a war within a country and a war between countries) is extremely difficult. What political systems in a post-conflict environment can leave all sides content has been one massive question for the discipline of comparative politics. A complete separation? A federal state? External bodies governing certain regions? What type of government to have? What electoral system?

These questions are as difficult as they can get.

But we have to get to a ceasefire first.

Two, we have to allow ourselves to draw broader parallels between conflicts in other regions and extend our empathy further without engaging in a certain type of accusations that we might hear.

What are these types of accusations? Let me give you an example here.

Just yesterday, on my social media, I reshared a post that showed a map and some of their airstrikes that happened that day: Russia bombing Ukraine, Israel bombing Syria, Saudi Arabia bombing Yemen, and the U.S. bombing Somalia.

Right away, I received a message that accused this post of relativism. Or, to use another word you might have heard, what-about-ism.

And indeed: if one assumes a cynical tone here, we can see how it can be interpreted as an attempt to say that Ukraine is just another war that we are seeing unfold. I, too, deeply dislike when someone tries to use what-about-ism in real life, saying that because someone chooses to talk about A, this means B does not matter.

So this is the second important but potentially unpopular thing we can do here: we can continue condemning wars everywhere, we can continue speaking out against atrocities committed by any superpower, and we can surely draw parallels between imperialist policies around the world.

That is not an insult to our humanity. That is an expression of it.

They might not be seen the same in the media but we can choose to see them as equals and we can say “this, too” as we condemn it.

Our hearts can go to so many places at the same time.

Justina Poskeviciute is CODEPINK’s Engagement Manager and a freelance political commentator. You can also find her on Spotify.
To see what you can do to stop the war in Ukraine, please see CODEPINK's campaign page here.