The Truth about Condi Rice

The Truth about Condi Rice 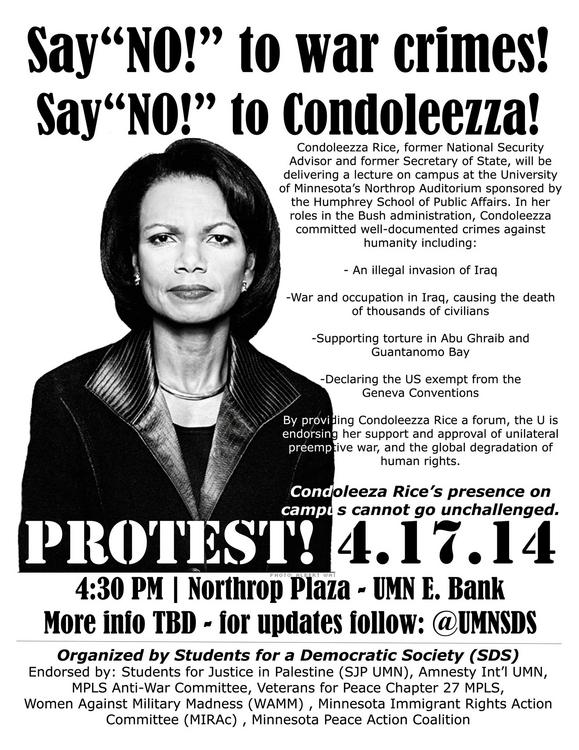 The University of Minnesota's promotion of Condi Rice (and paying her $150,000 via one of the University's top donors, the Carlson Foundation) turns "free speech" on its head, especially since University officials refuse to give even 5 minutes of "equal time" to those who would tell the truth about Condi's past criminal conduct. Officials refuse to ask Rice to discuss the hard questions about her involvement in war crimes and also refuse to let students meet with Rice (although a handpicked group of students apparently does get to meet with her). Dean Eric Schwartz of the Humphrey Institute who's responsible for inviting Rice even refused to meet with students about his decision. What free speech?!

The powerful effort to rewrite (this sordid) history has raised the question of how to effectively get out information about Rice's past commission of torture and other war crimes, because university officials and students seem mostly unaware of her past conduct, consequently falling for a ridiculous repackaging of Rice as a civil rights and feminist hero. (Even the various human rights groups and anti-torture organizations based in the Twin Cities such as Center for Victims of Torture and Minnesota Advocates for Human Rights, not to mention the University's own Human Rights Center, have fallen silent such is the hypocrisy and pressure to now lionize the woman who personally ordered the CIA to commence waterboarding!) Learn more how to take action in Minnesota!

Can a Formula 1 Star Send a Message to the Saudi Government?