The Missing 'Peace' in $13.5 Billion of Military Aid to Ukraine 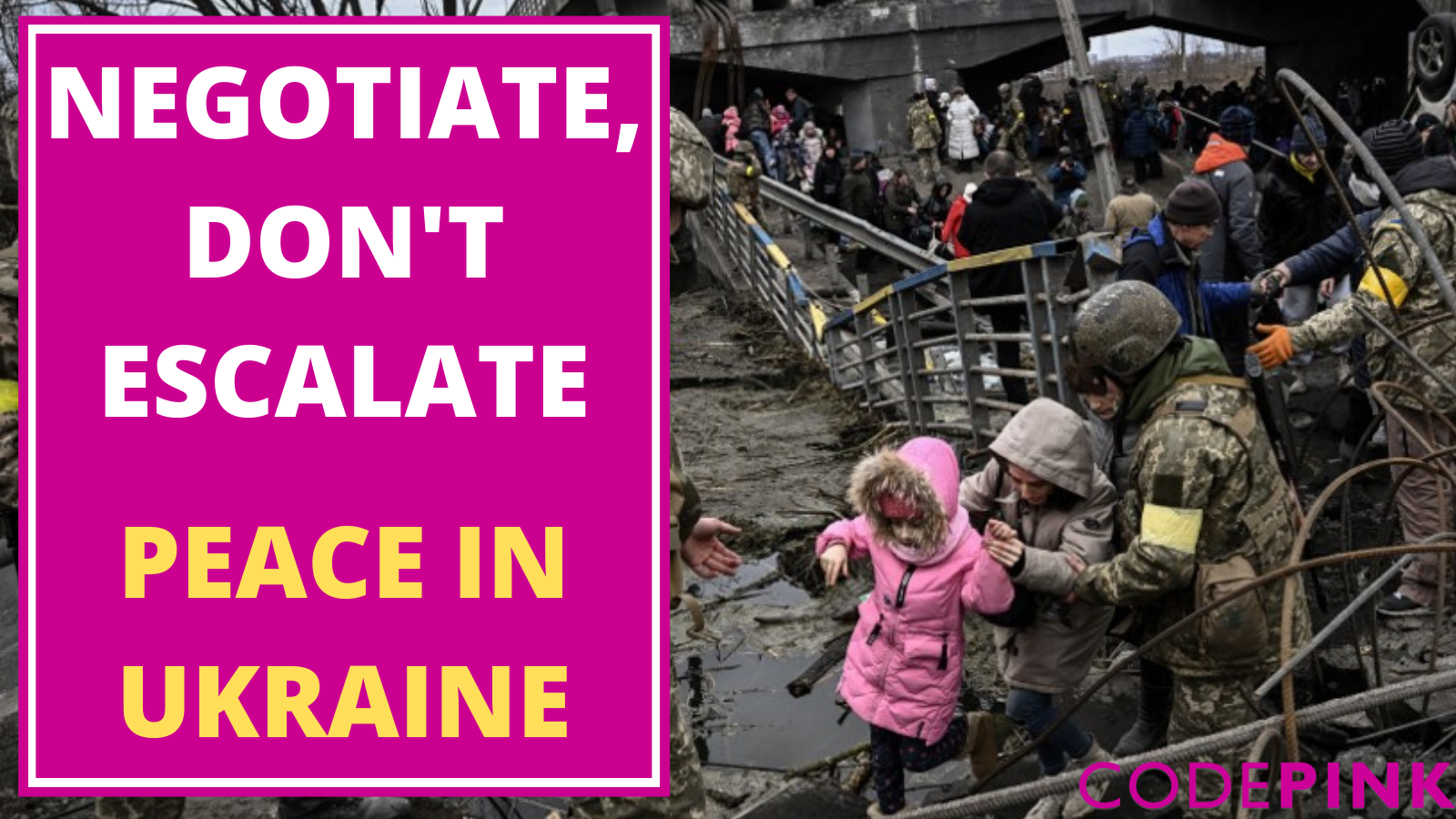 We cannot call for peace in Ukraine while simultaneously supplying that country with advanced rocket systems and missiles that could lead to a direct war between the US and Russia, the world's most heavily armed nuclear nations

The Department of Defense recently announced it would send nearly $3 billion more in weapons and assistance to Ukraine. The White House news of the largest Ukraine arms package yet—rockets, drones, 350,000 rounds of ammunition—was drowned out by President Biden's announcement to cancel federal student loan debt for almost half of the country's 43-million debt-saddled people. So while our nation debated whether U.S. citizens should be burdened with huge predatory interest for seeking an education; predatory weapons of war were given the greenlight for Ukraine, even though there's no accountability for who will receive those weapons, including the neo-Nazi Azov Batallion, an official wing of the Ukrainian military.

The latest announcement from the DOD brings the total in weapons, ammunition and military training to escalate the war in Ukraine to at least $13.5 billion dollars.

We cannot call for peace in Ukraine while simultaneously supplying that country with advanced rocket systems and missiles that could lead to a direct war between the US and Russia, the world's most heavily armed nuclear nations. A new study estimates that a nuclear war would kill five billion people, over 60% of the human population, with 360 million burning up in the immediate aftermath, the rest dying from starvation during a dark subzero winter.

We must step back from the brink. How?

Ultimately, the US, the nuclear states and all NATO countries must become signatories to the United Nations' Treaty on the Prohibition of Nuclear Weapons (TPNW) to outlaw the development, possession, use and threatened use of nuclear weapons.

In the short term we must support an immediate ceasefire in Ukraine, not simply around the Zaporizhzhia nuclear reactor under shelling in southeastern Ukraine, but throughout the entire country where the Russian invasion has displaced millions and destroyed much of the Soviet-era infrastructure: rail and electrical lines, bridges, hospitals.

We must tell Congress and the White House there is no military solution, only a diplomatic one that acknowledges the security interests of all stakeholders.

If Ukraine and Russia can negotiate grain exports, prisoner exchanges and an international inspection of a nuclear plant, they can reach a negotiated settlement. The more weapons we send, however, the less incentive there is to sit down and talk. Without the US and NATO fueling the war with more weapons, a settlement might have been reached months ago, perhaps as early as last March when Turkey brokered a deal scuttled at the last minute.

This war might have been stopped before it started had NATO not expanded to Russia's neck and the US not shipped weapons to Ukraine to escalate a civil war with Russian separatists  in Ukraine's industrial region.

It is long past time for President Biden to pick up the phone and engage in direct talks with Russia's President Vladamir Putin. There is much to talk about, starting with a request that Russia remove nuclear-capable missiles from Kaliningrad, a region sandwiched between Poland and Lithuania, in return for US agreement to rejoin US-Russia arms control agreements–Open Skies Treaty and Intermediate-Range Nuclear Forces Treaty—abandoned under the Trump administration. Also up for negotiation might be the removal of US nuclear weapons from five of Europe's NATO countries–Turkey, Belgium, Germany, Italy, the Netherlands with assurances that both Russia and US-dominated NATO will cease mock nuclear strikes.

Such a conversation could lead to a negotiated settlement in Ukraine. It has in the past. The 1962 Cuban Missile Crisis ended when former President John F. Kennedy agreed to remove US nuclear missiles from Turkey and Italy in exchange for Soviet removal of missiles from Cuba.

We must ask ourselves what is the cost of war?

For the world, the cost is a worsening of the climate crisis with exponentially increased greenhouse gas emissions from missiles, rockets and tanks. Rockets also pollute the soil and groundwater; warships disrupt marine ecosystems.

For the Middle East and Africa, countries dependent for grain on Russia and Ukraine–the breadbasket of the world—the cost is famine.

For Ukraine, the cost of a protracted war is more lives needlessly lost, millions more displaced from their homes.

For the United States, the cost is rising inflation and shrinking paychecks for the working class.

Rather than risk World War III and nuclear annihilation, President Biden and Congress must consider the urgent needs of people in the United States, where 100 million are steeped in medical debt, 100 million may face eviction, 38 million are food insecure and millions more contend with inflationary woes. Thousands of residents of Flint, Michigan, still have no clean water.

It is unconscionable to hurl money at war profiteers –Raytheon, Lockheed Martin, Northrop Grumman–for more weapons to fuel a protracted war over there while over here the people struggle to survive.

We have been here before.

In Vietnam. Afghanistan. Iraq–the US launched protracted wars that resulted in millions of civilian deaths. To what end?

Someone needs to tell the White House, Congress, the media, politicians, and political pundits that war is not the answer.

The outlines of a peace agreement–ceasefire, withdrawal of foreign troops and weapons, self-governance for Donetsk and Luhansk, control of state borders by Ukraine–already exist. MINSK II is an agreement signed by Ukraine and Russia in 2015 but never implemented for lack of political will.

The solution must be a diplomatic one centered around reparations and debt forgiveness for Ukraine, release of US sanctions in return for Russian concessions, semi-autonomy for the Donbas and guarantees that Ukraine will not join NATO. The possibility to end the war in Ukraine starts with the missing peace. Diplomacy.

Marcy Winograd is coordinator of CODEPINK CONGRESS, a bimonthly program on U.S. foreign policy and demilitarization. A long-time anti-war activist, Marcy served as a 2020 DNC delegate to Bernie Sanders and co-chairs the foreign policy team for Progressive Democrats of America. A member of Veterans for Peace’s Climate Crisis and Militarism Project, Marcy’s activism began in high school when she marched against the Vietnam War and later joined the defense team of Pentagon Papers whistleblower Daniel Ellsberg. A retired English and government teacher, Marcy blogs about militarism and foreign policy.