The FBI Agent, the Retired Colonel, and the Anarchists. 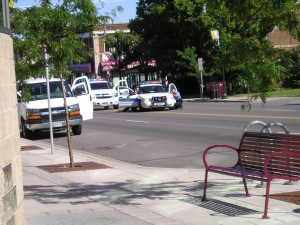 I'm cross-posting this from over at Feministing, where I'll also be blogging for the week.

It's like a joke here in St. Paul—but one that's not terribly funny. What does it take to get whistle-blower and former FBI agent Anne O’Hare McCormick, retired Army Colonel Ann Wright, and a roomful of dirty anarchists together in an unkempt rec room that, until a few hours ago, was locked on specious charges of fire-code violation? Not much, it turns out.

At about 9 p.m. on August 29th, several fully armed police officers used a battering ram to force their way into the re-worked institutional building now known as the RNC Welcoming Committee’s Convergence Space, threw by some accounts 30, by others 60, activists of all ages—from the pee-in-their-pants-young to the health-issue old—to the floor, handcuffed them, and detained them for two hours, busting in with battering rams and confiscating personal computer equipment on their way out.

Rebekah, a 15-year old from Madison, WI, was there. She spent two and a half hours laying on the floor facedown before officers noticed her and released her—clearly having forgotten about her (and her status as a minor). It’s actually not legal, she knows, to set her free her unless she’s released into the custody of her parents, but they didn’t care: there’s some question too about whether or not they should have raided the building without a warrant, shoved loaded guns in the faces of minors, photographed everyone present, and handcuffed and intimidated young children in the first place, so there’s some grey area here.

What had she been dong when the raids hit? “I was coloring this,” she gestures to a picture she’s finishing up, a glittery pink and purple thing with elephants and flowery handwriting. “Reclaim the elephant,” it says. There are also sunflowers. It’s very cute. 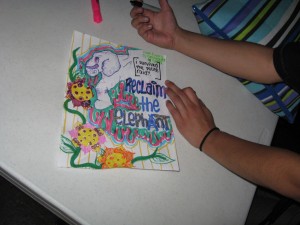 She’s dedicating it to other survivors of the Convergence Space raids.

Another woman perhaps in her 60s, a teacher, was cuffed for slightly less time, two hours, and describes the two waves of officials that stormed into the building: first sherrifs, then police. She and some friends—one a very young boy—were upstairs watching a movie. Surplus: Terrorized into Being Consumers. When the police confiscated the DVD player, they also stole her movie.

Even the convenience store worker, Gina, that worked down the road was caught in the raid. Just driving the two blocks from the SuperAmerica past the Convergence Space to her home had a cop pulling her over and searching her vehicle.

“I was wearing my uniform,” she told me. She didn’t look like an anarchist. No way. Just a SuperAmerica worker.

“I told them, I’m graduating from the police academy in two weeks. So, where is your warrant for searching my vehicle? I don’t consent to this.” 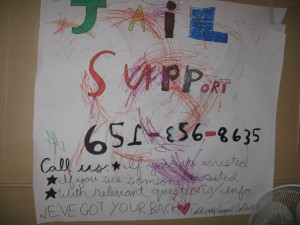 This afternoon, the former Colonel and FBI agent and all the scruffy losers I adore were all converging on the reopening of the Convergence Space, and activists of all sorts had gathered to rally press and support and bystanders. The press conference lasted about half an hour.

As David Bickens, father of arrestee and RNC organizer Marjorie Bickens—still in detention as of publication—claimed, “My daughter was arrested for her commitment to peace and justice.”

One of the press conference organizers received updates as to new arrests and detainments—some police are claiming that, given the weekend and the holiday, arresting people now means they can be held for 36 hours without being charged, which would put us at, what, Tuesday night? Halfway through the conference—as they unfolded. By the end of the press conference, she’d received notice that 12 more activists had been detained. 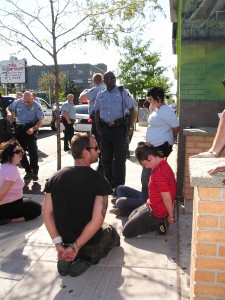 One group of activists, all employed by the extremely legit-sounding Organic Consumers Association on their way to the press conference, witnessed on the way a group of young people in a white van being pulled over by undercover cops, who forced the crew out of the van and demanded they walk backwards down the sidewalk. Alexis Baden-Mayer happened to be standing nearby.

“Get out of the line of fire or we’ll shoot you,” the cops told her.

So what does it take to have an entire city—a traditionally progressive blue collar one, but drifting toward the conservative of late—and the majority its intellectuals, activists, attorneys, youth, and educators up in arms? Excessive, illegal police brutality, clearly intended to scare the masses away from their first amendment-guaranteed right to freedom of speech.