The Agony of Yarmouk

"I always thought that the only time I would move from Yarmouk would be back to Palestine" - Umm Samir (Mother of Samir), Palestinian refugee 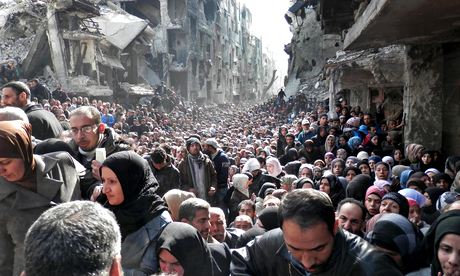 The devastating photograph of Yarmouk Camp from the United Nations Relief and Works Agency for Palestine Refugees (UNRWA) went viral last January. Thousands stood packed tightly between between the bomb-blasted walls of what had been their home district in Damascus. Their only source of food and medical supplies - for a population of approximately 20,000 Palestinians -- was what came out of the vehicles of the UN agency. And so they had gathered, still dignified but in desperate need, to receive the international aid that the UN workers had, under great risk, brought to them.

Yarmouk is a place on the Syrian map where three tragic stories intersect. The first story is the oldest: the chronic, decades-long Palestinian refugee crisis, the largest displaced population in the world. 160,000 Palestinians had lived there beginning in 1948, as part of the Palestinian diaspora. Syria was a refuge (though of course Palestinians there longed to return to their country), but now 235,000 Palestinians have been displaced in Syria itself and 60,000, alongside 2.2 million Syrians, have fled the country as of October 2013.

The second story is the narrative of war, both civil and regional, shattering the ancient land of Syria including its once-beautiful, historic capital of Damascus, the oldest continuously inhabited city on Earth. The UN reports that there are now 9.3 million people of diverse ethnic groups, including Palestinians, in need of basic life-supporting assistance. Over 110,000 have died in the war, and millions of children have been going without schooling except what is provided by the UN for years. Yarmouk has been an ongoing site of destruction since December 2012, when Palestinian factions, the Syria Free Army, and the Assad-controlled national army fought each other for control of the district. The district has been under siege by the Syrian government since July 2013.

The third, most specific and recent story is the denial of humanitarian aid to Yarmouk by the Assad government, among many other “hard to reach” areas. For 15 horrifying days in April, no food reached Yarmouk; people ate leaves off trees and swept herbs off the street; all the children there now suffer from malnutrition and some died of starvation. An international coalition of legal experts has recently condemned the interruption of aid, telling the UN that “there is no legal barrier to the UN directly undertaking cross-border humanitarian operations and supporting NGOs to undertake them as well.” UNRWA workers have been able intermittently to bring food and medicine since late April, but UNRWA spokesman Chris Gunness tweeted on May 8: Chris Gunness ‏@ChrisGunness 12h: #UNRWA is deeply concerned that after 8 days of distribution armed conflict has again interrupted humanitarian operations in @Yarmouk RT

Let the words of Syrian children to world leaders speak for the yearning of all for peace and home.

Please take a minute to sign this open letter to leaders of the world calling on them to immediately assist the thousands of people starving to death in Yarmouk. Time is running out, and drawing immediate and significant attention to the issue is the very least we can do.