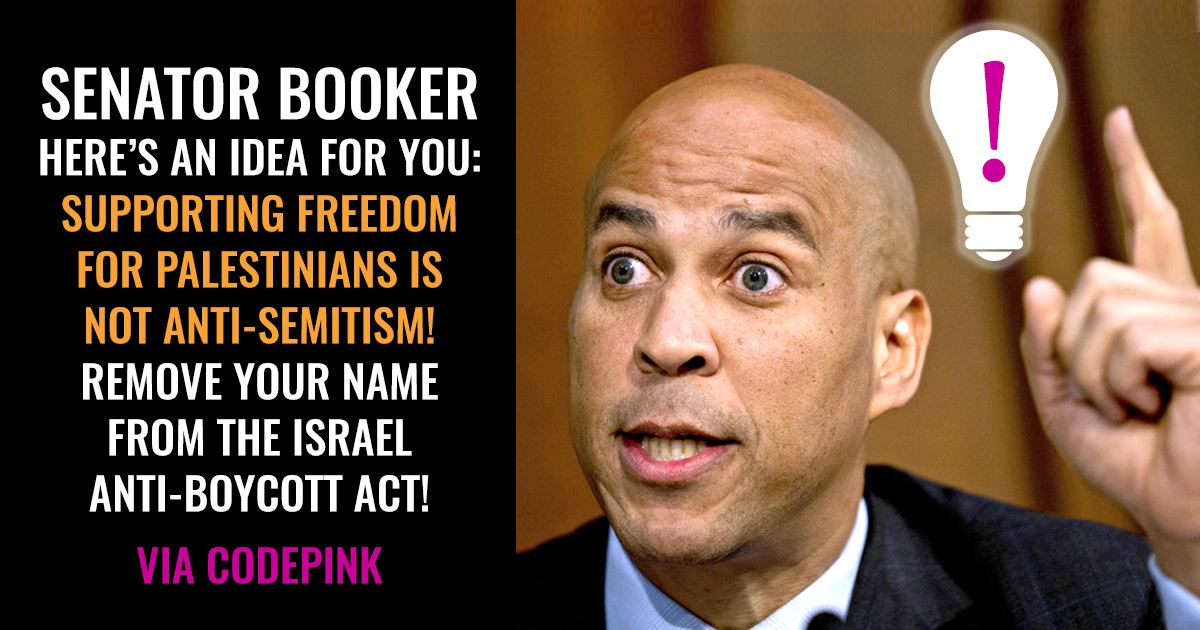 We are disappointed, but not surprised, that the pro-Israel lobby is exploiting a national moment of grief and fear to push a pro-occupation agenda. Last Friday, Democratic New Jersey Senator Cory Booker announced as a “response” to rising anti-semitism, he would be adding his name to the Israel Anti-Boycott Act.

The Israel anti-Boycott Act, aka the Gag Act, isn't about fighting anti-semitism. It's has nothing to do with the racist, anti-Jewish violence that took the lives of 11 Jewish worshipers one week ago today. It is about conflating criticism of Israel with anti-semitism and criminalizing advocacy for Palestinian rights. It’s a disgusting display of political opportunism. Send a message to Corey Booker: Support for Palestinian rights is not antisemitism. Take your name off the Israel Anti-Boycott Act!

The Israel Anti-Boycott Act was created as a strategy to undermine a list the United Nations has been compiling of companies doing business in illegal Israeli settlements located on stolen Palestinian land in violation of international law.

The ACLU is clear on the Israel Anti-Boycott act — it is unconstitutional. So why is Senator Booker adding his name to it? Send him a message now: Supporting unconstitutional legislation undermine work for human rights is WRONG response to the Pittsburgh synagogue massage.

From the Montgomery bus boycott to the campaign to divest from South Africa apartheid to the recent boycott of the National Football League, boycotting for justice is as American as apple pie. Whatever their views are on Israel and Palestine, members of Congress should recognize the Israel Anti-Boycott Act as a gross violation of our First Amendment.

Branding Palestine solidarity activism as “anti-semitism” is a dangerous distraction from the resurgence of white nationalist violence that is manifesting across the country in Pittsburgh, Kentucky, Brooklyn (where a recent community event was canceled due to anti-semitic graffiti) and many other places. Rather than supporting this Gag Act, Senator Booker should be supporting intersectional work taking place to dismantle all forms of racism and hate. Tell Senator Booker to remove his name from the Israel Anti-Boycott Act now!

In solidarity,
Ursula, Ariel, and the entire CODEPINK team