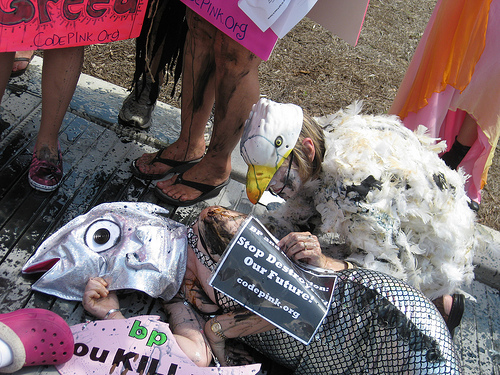 Last spring, CODEPINK activists organized a series of actions to protest, to demand justice for those directly affected by the disaster, and to “expose that Drill, Baby, Drill means Spill, Baby, Spill," in the words of Diane Wilson, CODEPINK Cofounder and Texas Gulf shrimper. Wilson has noted that the 2010 disaster is hardly the first of BP’s infractions:

I hate to say it, but what I’ve seen with the actions of BP in the Gulf is nothing new. The releases, the lies, the cover-ups, the skimping on safety, the deaths, the nonexistent documents, the ‘swinging door’ with regulators. What is new is the massive nature of the BP oil catastrophe and the fact that it can’t be covered up. It’s everywhere, from 5,000 feet down to miles upon miles across and then spread in the ocean’s currents. This elephant can’t be swept under the carpet, but I’m sure if BP could, BP would.

Despite the ways in which Gulf communities and ecosystems continue to suffer the effects of the disaster, BP’s priorities appear to be elsewhere, according to an account of BP’s April 14, 2011 shareholder meeting, the first to be held since the oil spill:

One woman from Texas was arrested and four others were ejected from the session – just before Dudley rose to the podium and told shareholders that “BP remains a great company with a great history and I believe a great future.”

“Not every company gets such an opportunity and we don’t intend to squander it,” he added, stressing BP’s three priorities are strengthening safety, winning back the company’s reputation and restoring long-term value for shareholders.

A group of activists attended the shareholder meeting, including Antonia Juhasz of Global Exchange and Diane Wilson, who described the plan of action in a press release obtained by CODEPINK:

I am coming to the AGM to call BP to account for its actions in the Gulf – for the oil spill, the lies, the cover-ups, the skimping on safety, the deaths, the non-existent documents, the ‘swinging door’ with regulators. The massive nature of the oil catastrophe means it can’t be covered up, even by BP. It’s everywhere, from 5,000 feet down to miles upon miles across and then spread in the ocean’s currents. I am coming to articulate the anger of thousands of Gulf Coast residents whose lives and livelihoods have been destroyed while BP continues to prosper.

At the meeting itself, Wilson “was ejected from the conference centre lobby, having covered her face with a dark syrup intended to resemble oil,” according to the Guardian. She was quoted saying, “This is the only thing they understand.” In an interview with Democracy Now!, she described the action in greater detail:

When I saw they absolutely were going to do everything they could to block me out, I had a baggy of molasses I had stuck in my bra, believe it or not, and I ripped it out, and I put it on my face, and I put it on my hands. And I said, "This is why they do not want us in here. They want us to go away. They want us to be quiet. They do not want any attention brought on this oil." And so, I probably stood there for, oh, 20 or 30 minutes, and eventually they arrested me. They hauled me off and arrested me.

If you would like to get involved in actions to mark the anniversary of the BP disaster in the Gulf, check out Act Against Extraction, which has a wealth of information about local and national actions around the BP disaster, along with stories about what people everywhere are doing.

For further reading on the subject of the BP disaster, CODEPINK recommends Diane Wilson’s new book, Diary of an Eco-Outlaw: An Unreasonable Woman Breaks the Law for Mother Earth, which can be pre-purchased through the link on CODEPINK’s web site. We also recommend Black Tide: The Devastating Impact of the Gulf Oil Spill by Antonia Juhasz.