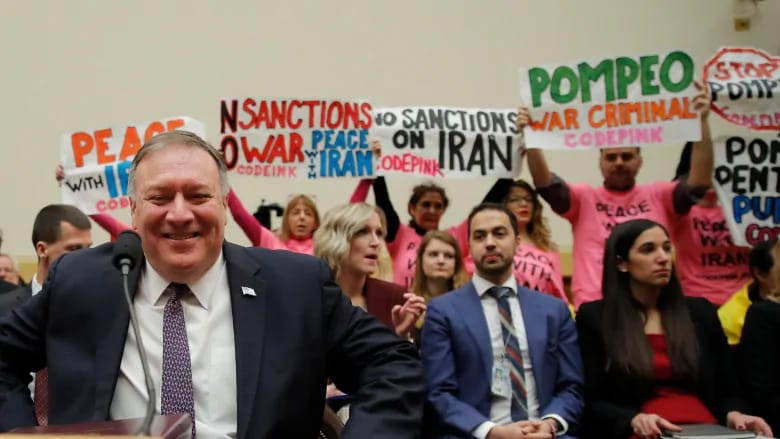 On February 28, 2020, Secretary of State Mike Pompeo testified before the House Foreign Affairs Committee. CODEPINK was there to greet him. We tried to hand out the following set of questions to the press in the hearing, but the police would not let us. Then, when we stood up to protest Pompeo before the hearing began, four of us were arbitrarily arrested without any warning (the police are supposed to give three warnings). In fact, after the four of us were pulled out of the hearing, a policeman inside the hearing said to the others, “this is your first and final warning.” Then the gavel went down and the hearing started. We will fight our unlawful arrest in court.

Below are the questions we wished that we—or congress—had the opportunity to ask the Secretary of State:

How has withdrawing from the Iran nuclear agreement made the US and the world safer?

How has the assassination of Gen. Soleimani made the US and the world safer? Do you still maintain that Soleimani posed an imminent threat to the US? What was that and how does your definition of “imminent” compare to the definition used in international law?

Do you feel any remorse for the way US sanctions are hurting millions of ordinary Iranians, especially now with the outbreak of coronavirus in Iran and the shortages of medicines?

Why is repression, ties to extremist groups, foreign intervention, etc. a problem in Iran and not in Saudi Arabia, which is worse on all these counts?

Do you think your bellicose stance towards Iran contributed to the overwhelming victory of the hardliners in the recent parliamentary elections? Does that make future dialogue with the US more or less likely? Is that helpful for the people of Iran who want to see reforms?

You said you have built a coalition to counter Iran. Who exactly is in that coalition and did any of those coalition members approve of pulling out of the Iran nuclear deal or assassinating Gen. Soleimani?

Why is the US supporting the catastrophic Saudi bombing of Yemen?

If the Iraqi parliament asked the US to withdraw its troops, why are we staying there? Why did Trump respond to their request by threatening sanctions and withholding their oil money in the New York Federal Reserve Bank? Is this the right way to treat a sovereign nation we have spent almost 20 years supporting?

You used a US contractor’s death as the rationale for bombing Kataib Hezbollah but Iraqi intelligence officials say it was likely ISIS that carried out the attack on the US base. Did you create a crisis with Iran and put US forces at risk over false information?

Why has President Trump has repeatedly minimized the traumatic brain injuries suffered by US soldiers as a result of your administration’s reckless assassination of Gen. Soleimani?

Do you really think your policies will bring Iran to the table to negotiate a “better deal” or are you really hoping for regime change? If the people of Iran rise up and overthrow the present government, will the result be a more liberal, secular government or chaos and violence for years to come, as occurred in Iraq or Libya after US invasions?

Do you think the American people want another war in the Middle East? If not, what are your plans to move from the warpath to diplomacy????? Might you be willing to take some advice from the peaceful women of CODEPINK, who have traveled to Iran several times, meeting with officials and ordinary people who love Americans but hate our government?