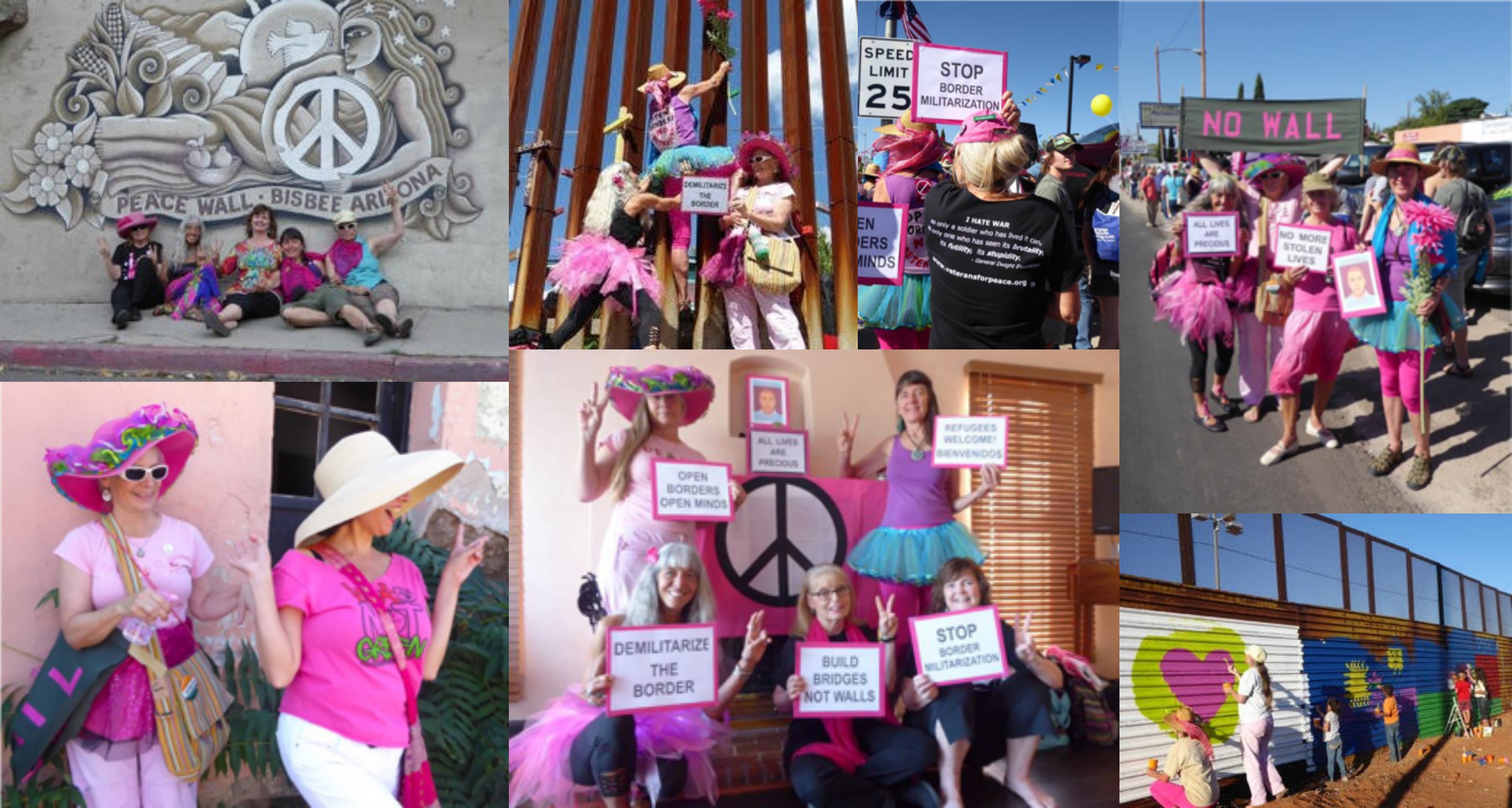 Thanks to the organizers of SOA Watch, The convergence of over a thousand activists on the Border in Nogales was nothing short of stupendous.  The CODEPINK contingent was small but vibrant as ever. It was a pleasure being a part of our contingent with activists from Arizona, California, New Mexico, Texas and Washington State. We participated in the Veteran-led March from The Hotel Americana in Nogales, AZ to the Mexican Border, with an option at the border to cross or stay on the US side for rallies on both sides of the border. There was one stage, interrupted by “the wall”, with speakers, singers, poets, and family members of those lost to the insane practices of our border patrol. Indigenous people led rituals and various musicians performed, including Emma’s Revolution (http://emmasrevolution.com), well known to many of us. Listening to and joining in the sung poetry of the “Peace Poets” was wonderful. (http://thepeacepoets.com/about-us/)

After Saturday’s march and rally, there were several workshops on both sides of the border.  Nancy Mancias (CA) and Leslie Harris (TX) led a workshop in a primary school in Nogales, MX.  (Thanks to Leslie for stepping in for Ann Wright who wasn’t able to join us due to her harrowing experience on the Women’s Boat to Gaza.)

Their workshop: “Migration Crisis: From Europe to the United States and Beyond”

With no end in sight to criminal gang violence in Central America’s Northern Triangle or the conflict in Syria and Iraq, spontaneous flows of child and family migration to the U.S. and European borders show no signs of letting up. As violence continues, and millions of children and families are disenfranchised, displaced and abused, the vast majority of them are looking for a new peaceful home in the United States and Europe. In both regions, smuggling networks continue to operate and adapt to new policy changes. Nancy Mancias and Leslie Harris made presentations and led a discussion on European and U.S. migration parallels and western foreign policy on refugees. We heard stories of visiting refugee camps in Germany and their work in the refugee camps in Greece. Nancy told us about CODEPINK’s “knitting for refugees” project. With winter quickly approaching, she’ll soon be making another trip to Greece with knitted goods to deliver.

Saturday night there were more musicians and speakers. We performed a Light Brigade Action, thanks to Leslie and Danna who hauled the light letters from Dallas.  We spelled out: BUILD BRIDGES NOT WALLS. 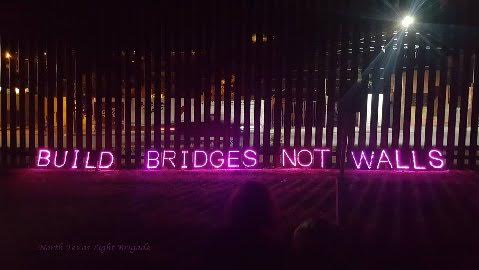 On Sunday we attended a vigil to remember the victims of US state violence and celebrate our resistance. We listened to Father Roy Bourgeois, a laicized (for his belief in the ordination of women) Roman Catholic priest and founder of SOA Watch. We heard the singing of the names of those so tragically lost while singing their names and “Presente” after each name was sung. The numbers are staggering. Adding to the festive atmosphere were the incredibly creative puppetistas, giant figures used to illustrate the stories and struggles around our protest.See this for more on our gathering at the border and why we were there:

Special attention was given to the memory of Berta Caceres, a Honduran environmental activist and indigenous leader of the Lenca people whose tireless fight for human rights led to her assassination on March 3, 2016.

Our convergence in Nogales was on the anniversary of the death in 2012 of then 16-year-old Jose Antonio Elena Rodriguez, shot and killed by a U.S. Border Patrol agent from the Arizona side of the fence.  He was accused of “throwing rocks” at the wall from the Mexican side. (Parallels were drawn between the struggles of Mexicans and those of Palestinians.)

On Sunday afternoon, some of us decided to do a direct action at a border checkpoint not far from Nogales.  Accompanied by 200 or so supporters, there were roughly 20 of us risking arrest, approaching and passing through the checkpoint undocumented.  We decided to leave our identification behind, mirroring the actions of so many of our neighbors to the south, crossing the border without documentation.  We chanted and sang for five hours, but none of us were arrested.  Bill Quigley (Center for Constitutional Rights) led an excellent team of legal support for those of us risking arrest at the checkpoint. http://www.truth-out.org/speakout/item/37961-the-world-we-want-an-activist-dispatch-from-the-soa-watch-convergence

Thanks to Josie, Leslie, Nancy, Toby, Danna, Kit, Keith, Alison, Carolyn, Maggie, Chris, Cathy, Paki, Ellen, Ridgley, Manijeh, Dennis, Ray, Ralph, Jerry … for being there too. Special thanks to Josie for helping with organizing and taking pictures! We’re very grateful to Alison McCleod for joining us in Nogales and filming https://vimeo.com/187456403.

We also appreciate Alison's overwhelming generosity in housing some of us in Bisbee after Nogales and taking us to and filming at Gretchen Baer and Border Bedazzlers' art project: https://vimeo.com/187509510

Watching Carolyn Torontos skillfully paint the image of Jose Antonio Elena Rodriguez on the border wall was amazing. Our interactions with the children painting were so much fun!

We’re looking forward to converging at the border again next year!