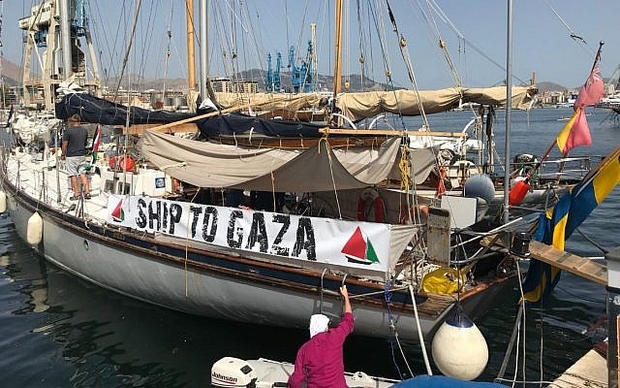 I went to Napoli Italy and joined to support the Freedom Flotilla to Gaza. In Napoli, there were a series of events in the build-up of people support for the boats. There are four boats, three sailboats and one (fairly large) engine boat. This latter is the one I was to be on. I did not book a Bed & Breakfast room and chose to stay with the group which was split between those that stayed at the boat or in an "occupied building" downtown. The abandoned building used to be a sports facility that is not maintained and is one of several abandoned facilities that were taken over by students and activists to use. It was at a main street and was noisy but it is OK. The boat cabins themselves are very hot (Not to mention mosquitos at the port area). In any case the conversations, activities, and work left little time for sleep. On the second evening in Napoli, my mobile phone was stolen on the boat (not by someone interested in its economic value but by Zionist infiltrator/s). I had to spend some time to deal with this problem privately with help of colleagues back home in Palestine. Napoli people (including the mayor) were very welcoming.

While in Napoli I also managed to squeeze some time to visit the oldest Rotary club here (founded 1924) and visit the natural history museum (actually it is a series of separate museums: geology, palaeontology, ethnology, biology). Making connections and networking with new people every day. On Sunday, we left Napoli in an emotional farewell. Some members went by ferry or even aeroplane to Palermo. I and 15 others (six crew members, two journalists) were on Al-Awda ship. We ran it rather slow so that we arrive to Palermo 24 hours later together with the slower sailing boats.  The 24 hours on the Mediterranean were hard on our bodies (little sleep, constant roll and tug of waves and movement) but were really uplifting to spirits. Beautiful blue waters, beautiful skies, and great people to talk to and learn about their lives and what makes them tick etc. At one point we were visited by a group of some 40 dolphins who decided to greet us and give us a show. People and dolphins really seemed so happy to see and greet each other.

Arriving near Palermo, the sailboats were there to circle our boat and then the four boats with us leading approached the harbor. From the distance, I could see how excited the crowds were to welcome us. Flag of the city, honor guard of the city, flags of Palestine, flags of some hosting groups, and most of all good people (including our own ground team) were there cheering, waving, dancing as our ship crew docked and tied the ship. After some brief speeches from the Mayor of Palermo and some of us, the whole group of some 100 people marched to join a large (400 people) demonstration that was already taking place about 2 km away. The latter was a demonstration in support of immigrant rights (Palermo is a welcoming city for immigrants). As we approached the larger demonstration chanting Palestine Libere and free, free Palestine the larger demonstration was so happy to see us and broke out in a great wave of cheers.

Here in Palermo, I split my time between a B&B (where I could take a shower) and the boat. I also spoke to participants and locals. I visited with Rotary Clubs and with the botanical garden. I met great people and reconnected with old friends. I had long private conversations that sometimes lasted for two hours or more with people like Dr. Ang Swee Chai and Dr. May Kayyali. The former is an orthopaedic surgeon who already worked treating Palestinians in Sabra and Shatila in 1982 and in Gaza and other places and I was glad to connect her and that she immediately agreed to be on the boat (a far stronger candidate than I am). Dr. Kayyali whom I knew for some 15 years is one of the best Palestinian ambassadors in the world. She hosted the participants for Maqlouba and served it herself! I met so many other good people who are now on the boats hijacked by Israeli apartheid racist forces. Great people.

I am heartbroken that I could not join the boats on the last leg to Gaza (for many reasons that I will not bore you with) but being with them for 10 days was one of the best investments in my time and money. Having met these hundreds of people and seen the determination and love we share adds to my confidence that Palestine will be free (from the river to the sea!). So my friends are now in Zionist small jails and I remain in a Zionist big jail (apartheid ghetto reserved for Palestinians). On Friday Israel killed and injured Palestinian children who were protesting the killing and injuring of Palestinian children. Today (Sunday, contemporaneous with hijacking our boats), Israeli apartheid released Ahed and Nariman Tamimi.

My body is in Bethlehem --- my heart is on Al-Awda ship.