Shame, Shame on the King of Bahrain

CODEPINK and its allies protested today outside the Bahraini Embassy to show solidarity with the protesters in Bahrain and to draw more attention to the issue. This protest took place one day after the visit by Bahrain's Crown Prince with President Obama. 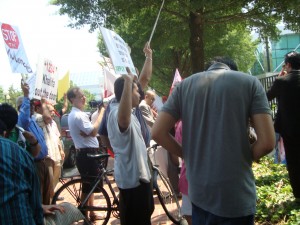 While many had hoped the situation in Bahrain would improve once martial law was lifted on June 1, that has not been the case. The very day martial law was lifted there were violent crackdowns against Shi’ite opposition groups in villages throughout Bahrain. Tear gas and rubber bullets were fired at peaceful protestors by the Bahraini security forces. It is clear that even though martial law has been lifted, there is no change in policy towards the demonstrators. Civilians who are trying to express their discontent, peacefully, continue to be unjustly and violently prosecuted.

Events in Bahrain have deteriorated since February when thousands gathered in the center of Manama. Inspired by the popular uprisings in Egypt and Tunisia, the demonstrators met for several days to protest of the current government of the al-Kaddafi monarchy. The protestors were met with violent opposition from security forces, resulting in the deaths of several demonstrators. Continued unrest caused the Bahraini government to declare martial law on March 15, going so far as to invite Saudi Arabian troops into the country to help suppress popular rebellion. Since this declaration instances of human rights violations have dramatically increased. 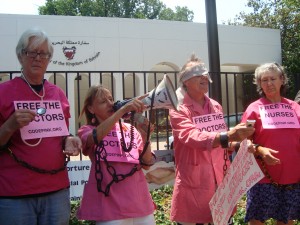 Those speaking out against the government are being taken from their homes in the middle of the night, held without charges, deprived access to lawyers, and are often abused while in police custody. According to Amnesty International those who have been arrested in the recent demonstrations are being tried by the National Safety Court, a military court established during the period of martial law in which international observers are banned. This court will continue to be used, even though martial law has been lifted. In addition to no international observers, those arrested are not provided with the opportunity of independent investigations and are denied access to lawyers. To make matters worse, those accused are often tortured into making untrue and absurd confessions before their trial.

Those working in medical professions have been specifically targeted for treating patients injured in anti-government demonstrations. The Physicians for Human Rights (PHR), a non-profit organization based in Massachusetts, has released extensive evidence of the attacks on Bahraini doctors and nurses. In the report entitled “Do No Harm: A Call for Bahrain to End Systematic Attacks on Doctors and Patients” the PHR describes the types of abuses the medical staff in Bahrain have been subjected to, this includes beatings, attacks of tear gas, rubber bullets, and bird shot, in addition to arrest and imprisonment. While the government claims that those arrested were promoting the overthrow of the monarchy, it is clear to the international community, and those within Bahrain, that these doctors and nurses were merely trying to do their job and help injured patients. 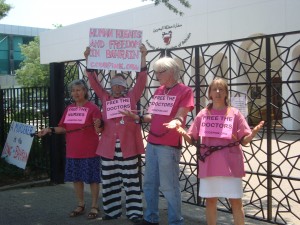 Recently 47 doctors and nurses are to be tried in the military courts described above, with the likely potential of receiving the maximum penalty of death. While the human rights violations are painfully obvious, the United States has done very little, at least publicly, to put pressure on Bahrain. In fact, instead of speaking out against the regime in Bahrain, President Obama met with the Crowned Prince of Bahrain yesterday, June 7,  in a private meeting. There was no press or publicity for this event, so it is unclear what was said, but if this administration’s record is any indication it is highly unlikely that there was any serious pressure placed on Bahrain. Once again, the United Stated proves that it values oil more than human lives.

Though the United States' official stance on Bahrain has been extremely disappointing, the international human rights community has stepped forward to take action. One campaign was to try to stop the famous Formula 1 car race from holding the Bahrain Grand Prix. Formula 1 is a highly popular event in Europe and the many parts of the Middle East. It was to be the biggest international event held in Bahrain this year. Originally, the event was scheduled to occur in March, but was postponed due to the imposition of marital law. After many attempts to reschedule the race until later this year, the FIA World Motorsport Council, which is in charge of the Formula 1 races, could no longer ignore the blatant violations of human rights being committed by the regime in Bahrain and they officially canceled the Bahrain Grand Prix yesterday, June 7. This is a big blow to the Bahraini government, for it is a highly lucrative event that brings prestige and international attention to the nation. Hopefully this act will lead to new campaigns against the regime in Bahrain and will encourage the Untied States to stop its cowardly support of Bahrain's monarchy.