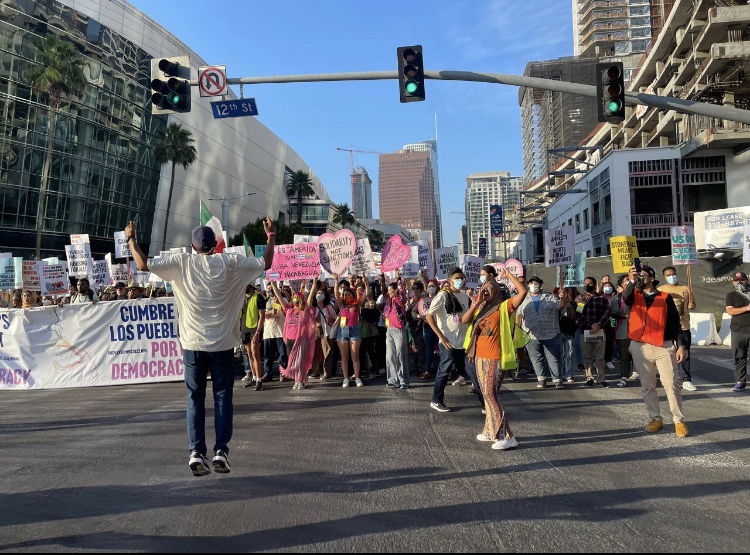 Last week, Biden invoked the Defense Production Act (DPA) to speed up the production of domestic clean energy infrastructure. This Act, originally passed in 1950 as a response to the Korean War, provides support for domestic production of materials deemed essential to national defense. As invoked last week, the DPA now provides investments in the domestic manufacturing of five green energy technologies (solar energy, heat pumps, insulation for buildings, hydrogen, and grid components) and waives solar tariffs. This move is an important milestone not only for federal U.S. support for a transition to green energy, but also in harnessing the precedent set by defense industrial policy to invest in peace, sustainability, and human needs instead of war.

Industrial policy, or policy that encourages economic development and supports domestic manufacturing, has long been viewed as socialist and thus taboo in the United States. However, as scholar Miriam Pemberton has long pointed out, the U.S. does in fact maintain consistent, robust defense industrial policy. The Department of Defense has numerous affirmative policy measures to support the growth of a healthy domestic defense sector, including massive procurement contracts; extensive investment in defense-related research & development (R&D); and the defense industry’s driving force, a military budget that represents the largest portion of the federal discretionary budget and increases every year (with $813 billion requested for FY 2023).

Movements for climate and environmental justice have long advocated for industrial policy to support the transition to clean energy that will be necessary if we want to avoid the worst impacts of climate change. The well-funded legacy of defense industrial policy demonstrates that this form of legislative and financial support for domestic industries (such as green energy) is wholly possible as long as there is the political will.

Political support of environmentally- and socially-oriented industrial policy will need to be raised differently than political support of the defense industry. Weapons manufacturers and war profiteers spend substantial amounts of money on lobbying and campaign contributions, which lands them handsome returns. For every $1 on lobbying that Lockheed Martin spent in 2020, it received $5,803 from DOD contracts. Industries working to serve the planet and its communities do not have the type of funds – or, perhaps, values – to make that model feasible for them.

Indeed, the lack of political will to support human needs and the drive to back the defense industry is the reason that the last move for a community and environment-driven industrial policy failed. After the Cold War ended, the sharp reduction in defense spending created a peace dividend that President Clinton promised to invest in the workers and communities losing defense-oriented work. Worker transition programs and the Office of Economic Adjustment, all federally funded, not only helped individuals find new work but supported communities in developing alternative economic opportunities. While this iteration of peacetime industrial policy did not fully succeed – 81% of the dividend went to the federal deficit, and defense corporations were granted subsidies – the goal of peaceful transition was there, and this time could be different.

The climate crisis is worsening, and it is becoming increasingly clear that an energy transition from fossil fuels to green energy is necessary for a liveable future. Biden’s use of the Defense Production Act to support green energy indicates the possibility of using the precedent of defense industrial policy to instead invest in sustainable, life-affirming sectors.  At a time when many Americans are struggling with inflation, debt, and the continued hardships caused by COVID, this move shows us what might be possible if we treat climate change with the necessary urgency and prioritize creating sustainable, local manufacturing jobs.

And this is just the tip of the iceberg. What would it look like to go beyond the Defense Production Act and move substantial funding from the Pentagon budget towards the transition to renewable energy, as the Energy Security and Independence Act of 2022 calls for? What if R&D funding and procurement contracts were instead granted to green energy development – especially to democratic, community-run energy projects like the Kayenta Solar Project? There is a massive amount of resources, funding, and infrastructure that we can invest in peace, sustainability, and human needs – it is just a matter of shifting our priorities.

Shea Leibow is a Next Leader on the National Priorities Project at the Institute for Policy Studies.