What a month! There are 31 local spotlights posted for September (with a few more still to come) on actions taken on five campaigns - Healthcare not Warfare; Accountability for War Criminals/Arrest Torture; the Ahava boycott; Afghanistan; and Ground the Drones. 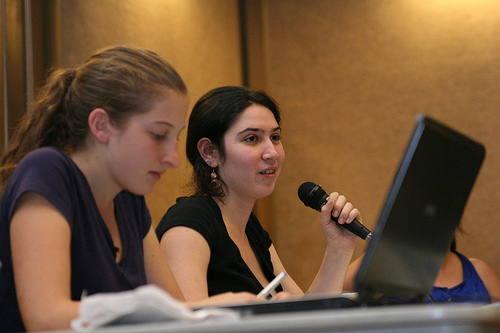 The "Why We Refuse" speaking tour of two young Israeli conscientious objectors, Maya Wind and Netta Mishly, fired up local groups around the country; see this report back from Berkeley to understand the power of their anti-occupation message.  Read news coverage from visits to Hawaii, AZ, CA, NYC, and New England here.  Their tour concludes in mid-October on the East Coast, and at the same time that Maya and Netta are speaking out in the US, another group of Shministim are touring in South Africa! "These young women, more than any of the numerous speakers [we] have co-hosted, really seemed to speak to... the audience.  I saw Jewish acquaintances in the audience who have never come to anything we have offered on Palestine/Israel, including talks by Jewish or Israeli speakers.  There's something very non-threatening about being lectured to by a couple of brilliant and sincere 19 yr olds who have risked so much.  [One man] said that even one of his acquaintances who is on the AIPAC board had said he was impressed with Maya and Netta's presentation." ~ Margaret Brown, Sabeel-Hawaii

"Healthcare not Warfare" signs were held at rallies by CODEPINKers from Washington state to Tennessee to Long Island in rallies as healthcare system "reform" continued as the most controversial issue in the nation. Charlotte Koons reported from New York: "It was an inspiring vigil and the honks of response were most heartening."

"Arrest Torture" organizer Cynthia Papermaster flew to Seattle to call for the impeachment of Judge Bybee, whose memos were key to the torture policies of the Bush administration, and just this past week camped outside of Cheney's DC home. Weekly vigils continue with community support on Sunday afternoons near the home of another "torture architect," UC Berkeley law professor John Yoo. Cheney paid $3.8 million dollars to get his name on a building at the University of Wyoming, and codepinker Nancy Sinedar was there with other activists to protest and get media coverage of this ludicrous outrage.

Five Ahava boycott protests happened in Los Angeles, DC, Chicago, and on September 19 international coordinated actions were creatively coordinated in Amsterdam and London! Click here to see the fashion statement made by Pat, Julia, and Rae in the windy city.

National Media Week against the War in Afghanistan, September 14 - 18, was a success in getting our "aid and diplomacy, not escalation" message via TV and radio interviews, facebook, blogging and letters to the editor (one of which is quoted above.) A few local actions happened during the week; click here to see the banner drop in LA and here for a flyering action in Atlanta. As first-time blogger (and award-winning novelist) Cecile Pineda observed, "…instead of one year of death and destruction, all Americans could enjoy one year of single-payer health coverage…This tradeoff is a stark reminder of the choice either for life or for death."  Local groups are prepared to take action against the war in Afghanistan during October. "Our air strikes are killing civilians, including women and children … Our attacks also in and on Pakistan are destabilizing that fragile country. In fact, our involvement in both Pakistan and Afghanistan is destabilizing the whole region. We need to leave militarily altogether." - Letter to the Editor by Anne Woodhead of Frankfort, KY 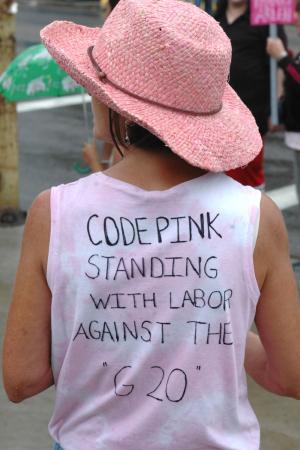 Pitts CP protests the G-20! Thanks to the phenomenal leadership of Pitts local coordinator Francine Porter, CODEPINK co-organized a two- day Women's Tent City as part of international protests of the G-20 in Pittsburgh, PA.  See a video of the tent city here.  International Peace Day was also

The month came to a dramatic end as 20 Bay Area activists and Liz and Edwina from Arizona gathered with CODEPINKers and other peace folks at Creech Air Force Base in Nevada for another round of "Ground the Drones" from September 25 - 30. With the serene Goddess Temple Guest House and CODEPINK hostess Candace Ross providing an oasis of nurturance, PINKers did several vigils and other actions at the AFB where drones are controlled and on the Strip in Las Vegas. Seven activists were arrested for trying to deliver a letter to the airmen and meet with the base commander. Zanne Joi was arrested twice within 24 hours, the second time for crossing an imaginary line a police officer drew in the air. As Liz says, "Thanks to our supporters because the drones continue to kill peace, property and people. We will need to persist …" San Francisco local group coordinator Nancy Mancias participated at Creech AFB protests and will be doing a fast for peace there over Thanksgiving weekend!