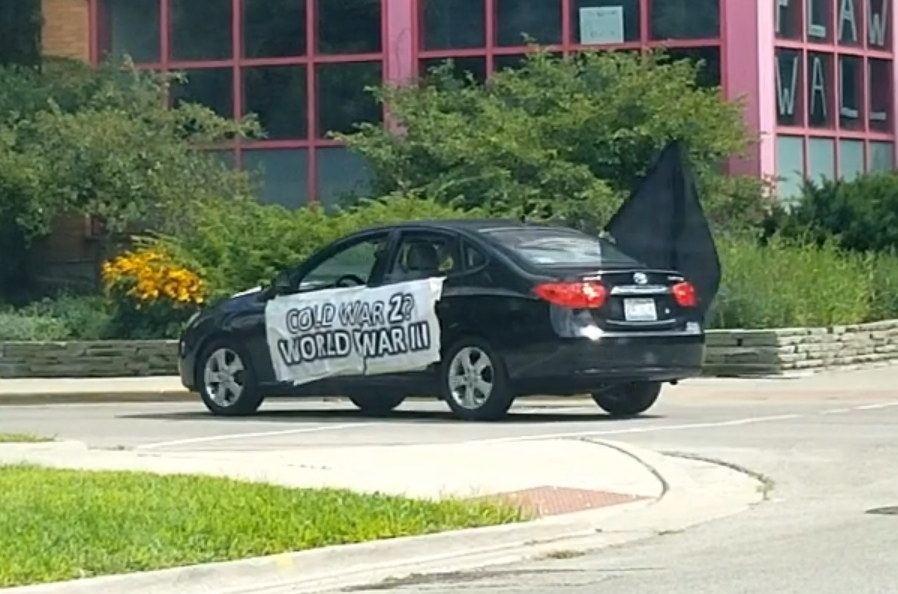 September 26th was the International Day for the Total Elimination of Nuclear Weapons.  In Chicago, where Voices for Creative Nonviolence is based, activists held the third of three COVID-era "Car Caravans" for nuclear disarmament, travelling through the city from Voices' own rapidly gentrifying Uptown neighborhood to the statue on Chicago's South Side which marks the fateful site of Earth's first sustained nuclear chain reaction. Cars bore banners reading "End U.S. Nukes Before They End Us," "Still Here?  Dumb Luck" "Not China, not Russia, not Iran: the World Fears U.S." along with more explicitly antinuclear messages.

Stalwart in building the event were groups including Chicago Area Peace Action, CODEPINK, Chicago Committee against War and Racism, and the Gay Liberation Network, whose documentary of the previous month's caravan was just released and will soon find thousands of broadcast viewers in repeat airings on a local station. That caravan was carried out on the 75th anniversary of the atomic bombing of Nagasaki, and speakers were torn between the wish to commemorate the U.S.' shockingly racist WWII bombardments of Japanese cities, and the fact that today's thermonuclear weapons are incommensurably more devastating than those bombs, with a Hiroshima-model fission bomb of course included in the design of each thermonuclear weapon as a mere detonator.  Given their power which includes the power to trigger nuclear winter through even a limited exchange, these weapons' first-ever use will be uncommemorated: it will end all races and all cities.

This Saturday we had ten cars, some late in RSVPing. Discussion arose about the difficulty of drawing participants (and perhaps also the real effrontery of traversing Chicago's South Side), so soon after the Breonna Taylor verdict, and its outrageous near-exoneration of the policemen who killed Breonna Taylor.  We noted, however, that the United States has committed untold, unpunished murder worldwide in its self-assigned role as global policeman, and that it continues to arm itself with the hair-trigger weapon that will end the human upon its first firing.

One of our banners read "Holding a Gun to the Head of the World."  A mobster who never needs to fire his gun nevertheless uses that gun quite violently in enforcing his racket. The U.S. continually uses its nuclear arsenal.  Tireless dissident (and repentant nuke planner) Daniel Ellsberg writes persuasively in his book "The Doomsday Machine" that every nuclear-armed U.S. President has threatened or seriously considered nuclear first use to manage a non-nuclear crisis. Indeed, no President and no major-party presidential nominee has ever renounced nuclear first use as a policy, even against non-nuclear nations. Not only past atrocities, and the promise of future annihilation, but the present-day shame of blasphemously holding our omnicide gun to the world's forehead – to the foreheads of children – ought to convince us to place the building of a disarmament movement among our lives' foremost, belated, priorities.

Our caravan's literature, rightly careful to acknowledge the terrible nuclear records of both the Trump and Obama administrations, marveled that "[t]he U.S. public is frighteningly indifferent to a weapon of species extinction whose threat many bafflingly imagine to be somehow past. Humanity arguably now faces a worse nuclear danger than it did at the height of the Cold War. The Bulletin of Atomic Scientists have set their famed "Doomsday Clock" at 100 seconds to Midnight, its first time counted in seconds, rightly adjusting for the arrival of hair-trigger hypersonic nukes." That very indifference, and the consequent eagerness of both political parties to pursue Cold Wars either with China or Russia, is another cause to believe that Midnight is horribly near.

Our time is not without glimmers of real hope. A conscientious and heroic 2018 protest by the "Kings Bay Plowshares Seven" reminds us that courage in the face of midnight is possible – The Plowshares face a crucial sentencing date within the next month and deserve support from all of us. A larger antinuclear movement needn't stand or fall on its success in achieving, all at once, total nuclear disarmament – more gradual goals for movement-building are available, including Daniel Ellsberg's own recommended goal of eliminating "use-them-or-lose-them" land-based missiles first, and the five eminently sensible demands of the fierce (and growing) Back From the Brink movement.

Meanwhile outside the U.S. empire's borders, these candle-flickers held against midnight begin, blessedly, to resemble a growing encampment's blazing watch-fires.

Currently 87 nations have signed, and 45 (of a needed 50) ratified, the U.N. treaty definitively criminalizing the obscene nuclear stockpiles of these nine rogue states: the United States, Russia, the United Kingdom, France, China, India, Pakistan, North Korea, and (semi-covertly) Israel.  While nations in possession of multigenocidal weaponry have all, so far, boycotted deliberations related to the Treaty, countries menaced for generations by this "nuclear club”  are jointly declaring that nuclear-weapon-bearing countries are the gangsterish outliers.  With the world's nations ever more vocally against them, can even U.S. people maintain their indifference for long?

Ireland ratified the Nuclear Ban Treaty in early September, and the Irish Dail has already passed legislation enforcing the Treaty in Irish law. The new law makes it a crime, punishable by fine or life in prison, to “assist, encourage or induce” any other person to have anything to do with nuclear weapons. Once the Nuclear Ban Treaty enters into force, this will be the law in all countries which have ratified the Treaty. While countries that have not joined the Treaty are not legally bound to abide by it, the Treaty establishes in international law a legal “norm” against nuclear weapons that will continue to shape the behavior and policies of countries that remain outside the Treaty.

Two other treaties the US has shamefully never signed nor ratified are the Landmines Treaty and the Cluster Munitions Treaty, but the U.S. has not used these weapons since those treaties entered into force, partly because of the international stigma now attached to those weapons, and partly because of the difficulties of working alongside treaty-signing allies who legally cannot abet these weapons' use or manufacture.  US companies have been compelled to stop making the prohibited weapons, in part by international campaigns of divestment associated with the treaties. These same factors are already affecting US nuclear weapons production in the age of the Nuclear Ban Treaty.  If we support our global neighbors now, perhaps they could change the minds of our neighbors at home.

Humanity isn't here forever: and mutually reinforcing crises of war, of climate, of global inequality and global resource depletion ought to suggest to us neither lives of despairing apathy, nor the reckless self-deluding dash for omnipotence which seems to animate our leaders. Rather, they should teach us the urgency of living with meaning, dignity, connection and purpose right now, now while we have time.

We might have a surprising amount of time left if enough of us find the dignity to put compassionate, respectful, and possibly even global solidarity ahead of the fanciful and ambitious futures we were all building for ourselves. These years are precious. Let's ourselves exemplify the tremendous courage and compassion demanded of so many in the nations our government targets overseas, of the Plowshares activists now awaiting sentence. Let our love be safe and sound…

"…when old Midnight comes around."

Sean Reynolds ([email protected]) is a co-coordinator of Voices for Creative Nonviolence (www.vcnv.org) who travelled to Iran in CODPINK's 2019 delegation.