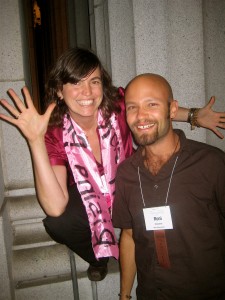 event in San Francisco at the Green Room in the Veterans War Memorial building (reclaiming memories of war with visions of peace...).  I was honored to be part of the group of finalists for the Rising Peacemaker award, along with two phenomenal activists, Roni Krouzman who cofounded the youth environmental and peace advocacy organization Next Generation, and Elizabeth Sy of Banteay Srei and the cocreator of Lush Orchid clothing.  It was incredible to talk about CODEPINK's vision on stage with these two people, as they are making the connections between the devastating impact of war and violence on the earth (Roni) and on women (Elizabeth) which is what the cofounders of CODEPINK came together around at the Unreasonable Women for the Earth conference over five years ago.  Also, my own activism is rooted in my experiences speaking out for women suffering domestic abuse, and advocating for sustainable solutions at UN environmental negotiations and Citibank protests in NYC.  Being a part of this peacemaker gathering reminded me that people are linking these issues, doing the crucial work, and making it happen!  Elizabeth was the grand prize winner and her speech was phenomenal, detailing how in her daily work trying to get young women accepted into high schools and providing resources and support for abused women, she is so focused on individual cases that she sometimes forgets it is all part of the big Peace picture.  True to the CODEPINK spirit, I had to unfurl a banner on stage, which read, "Rising Peacemakers Unite!" And indeed that's what we did after the ceremony was over.  We shared brief stories from the ground and celebrated our new connections.  Beyond a competition for a financial award, I felt this evening was about finding new pathways to collaboration, and about showcasing that yes, there is a youth movement for peace and justice!  And yes, it is vibrant and diverse and creative!

To me, my nomination for this prize was a testament to the inspiration and support I have received from the peacemakers in my life, especially my mom and stepdad Karen and Mike, and SF activists Irene and Regina, who all joined me at the awards event, the cofounders and core organizers of CODEPINK, and the Art in Action community!

The Enduring Visionary prize was awarded to Madeline Duckles who, at the ripe age of 92 is as feisty as ever about creating peace.  She even gave some tips to CODEPINKers and others engaged in direct action:

"If you are ever sprayed with tear gas, have someone repeatedly pour cold water in your eyes. It will help the blindness but not the pain. Apparently she knows from what she speaks.

If you are ever handcuffed, ask the police to cuff you in the front. She said she learned that lesson when she was arrested at Livermore Lab and they handcuffed her in the back. When wiping a drippy nose became necessary, she had to ask a fellow traveler whose hands were cuffed in the front to help."  From Karen's blog: Read Karen Topakian's whole blog about the event here.

Madeline is an activist you should know because she is so inspiring.  Here's her bio: From her early organizing against McCarthyism to international advocacy on behalf of war-injured children in Vietnam to present-day campaigning against U.S. military interventions in Iraq and Iran, Madeline Duckles has helped spark broad-based movements for change over three generations. She was a leader in Women Strike for Peace, mothers whose innovative demonstrations against nuclear testing were credited by President Kennedy with inspiring adoption of the Limited Test Ban Treaty.

At the end of her talk Madeline said that it sometimes feels like doing this work we are surrounded by death.  But activism brings so much life and liveliness into the world.  It affirms the best of humanity and it is so much fun.  I couldn't agree more with Madeline.  Working for peace is just plain more fun that sitting at home being depressed about where the world is going, or reaping a profit from violence and destruction.

You can read more about the Agape Peace Prize winners here.