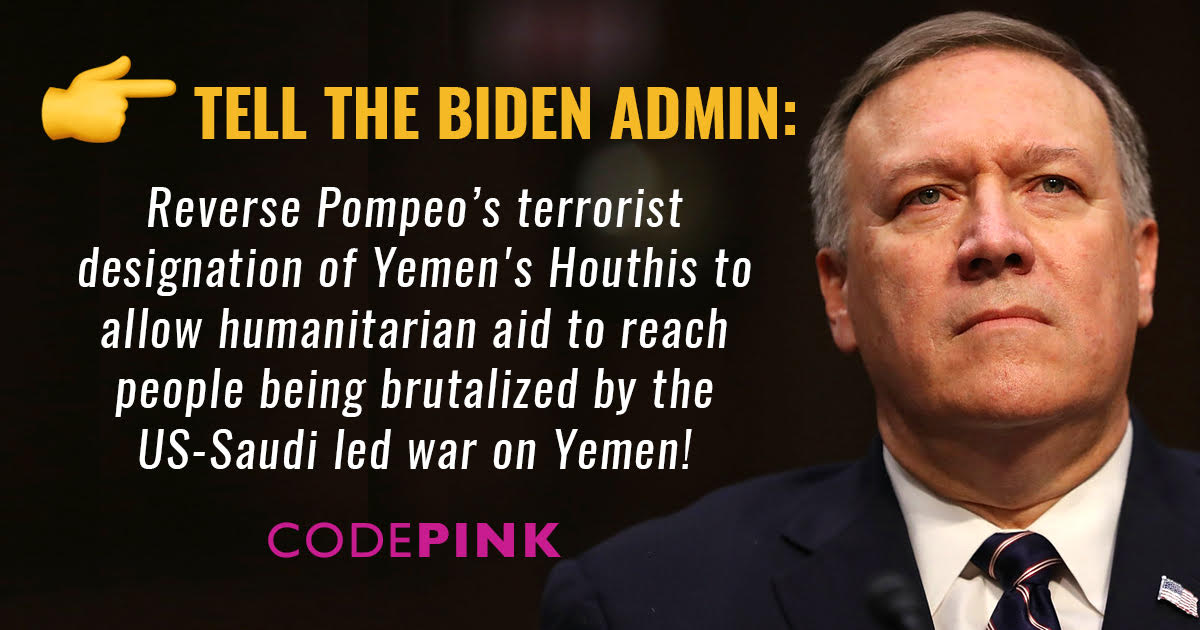 The Secretary of State Mike Pompeo announced he would be designating the Houthis in Yemen as a terrorist organization. Pompeo accused the Houthi movement of destabilizing Yemen. This lack of self-awareness is really on-brand for the Trump admin. Saudi Arabia and the UAE, along with all of their allies (including the US), are the ones to blame for Yemen being in the state it is currently in. Designating the Houthis as a terrorist organization is going to have horrible humanitarian implications.

Aid has already been cut to Yemen in the wake of the COVID pandemic. Being designated by the US as a foreign terrorist organization (FTO) means that many humanitarian groups will no longer be able to distribute the aid that has been keeping many Yemenis alive. Yemen, more than ever now, needs more aid, not less. Pompeo is aware that an FTO designation will starve Yemenis, and he is still doing it. Sign CODEPINK’s petition to incoming Secretary of State Anthony Blinken and President-elect Biden asking them to reverse this disastrous decision.

80% of Yemen relies on humanitarian aid. Not only will a further rollback of aid directly harm them, it will also block the path towards peace. Pompeo and Trump have been dedicated to uplifting the war crimes of Crown Prince Mohammed bin Salman of Saudi Arabia over the last four years. On January 25th, over 200 organizations around the world, including CODEPINK, are calling on people to participate in the World Says No to War on Yemen Global Day of Action. Find more information and RSVP here.

The FTO designation on the Houthis has to be reversed as soon as possible. The sooner aid can get to people in Yemen the better. The Biden administration has already said that they will end US support for the war in Yemen, but we need to make sure this evil decision is reversed too. Will you sign our petition to Blinken and Biden to reverse the designation of the Houthis as terrorists?

We only have a few days left until Biden’s inauguration. It’s only because of pressure from peacemakers like you that Biden has even made promises of peace in Yemen. Thank you for helping us hold the incoming Biden administration accountable to their words.