Report from the Roseroots: April - June 2010

What a spring! From the beginning of April through the Summer Solstice, CODEPINK local groups and the national team have been walking our talk through several campaigns: fighting war profiteers and oil corporations; boycotting Ahava as part of the international BDS (Boycott, Divestment, Sanctions of Israel) campaign; pressuring Congress to vote no on war funding; "arresting" Rove and other war criminals; standing with our immigrant rights allies in Arizona; mixing politics with pie-baking, and more. Here's a summary of the past three wildly busy, heart-breaking but also joyous, remarkable months: 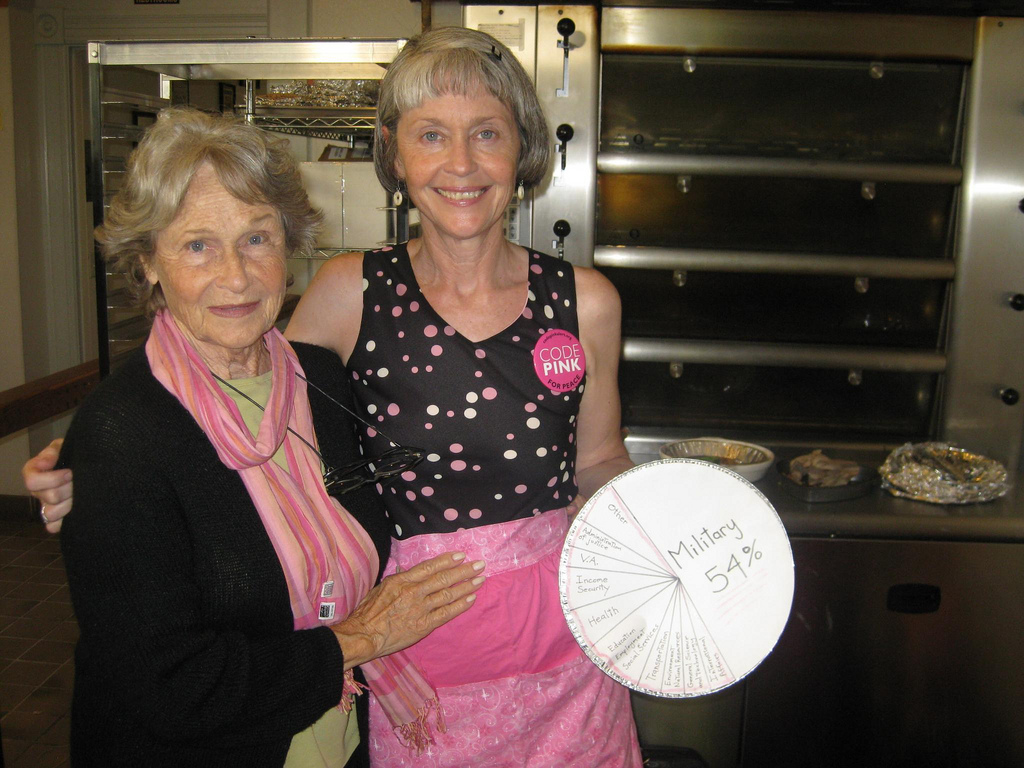 Dedicated CODEPINKer Lisa Savage, Maine pinkers and their many peace and justice allies had a victory in Maine when the Portland, ME City Council voted on April 5 to ask for war spending to be redirected toward human needs. The effort was part of a statewide campaign called Bring Our War $$ Home. News of this victory invigorated those who oppose war funding. On a national conference call later in the spring, Congressman Jim McGovern who authored legislation (HR 6015; vote still pending) about an exit strategy out of Afghanistan, said, "Maine leads the way!" (Photo at right: Lisa and her mom join CODEPINK for our cookbook launch in San Francisco)

On April 15, tax day, tea party actions in DC gave CODEPINKers an opportunity to do a survey of tea party members and to have interesting conversations with those on the right end of the political spectrum.  As Medea Benjamin told the Washington Post, "We found we were both against the bailout… against government subsidies to corporations -- the Chrysler/GM takeover."

A week later, the DC City Council abandoned plans to give war profiteer Northrop Grumman which makes drones and other weapons a tax incentive to set up in their city - a victory for CODEPINK and the local CENTS coalition!

Also on Tax Day, a vote by the Student Association Senate of UC Berkeley to divest from US weapons manufacturers, General Electric and United Technologies, involved in the Israeli assault on Gaza,

drew huge crowds and worldwide media attention. Rae's account quoted many eloquent voices against complicity with Israeli war crimes and for peace with justice in the Middle East.  While the bill was vetoed and not successfully overturned, this was a huge movement building moment. 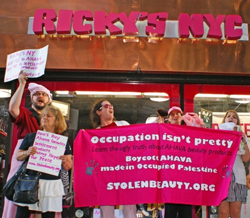 Our Stolen Beauty campaign held protests in Austin, TX, NYC, and Amsterdam against the Israeli company Ahava, which illegally uses mud and minerals from the Occupied West Bank in its cosmetic products. NYC coordinator Nancy Kricorian, who also visited Palestine this spring, explained the reasoning behind the BDS movement: "We can't wait for our U.S. government to lead on this," said Kricorian.  "It's up to people around the world to take the profit out of the occupation."  There is now a lawsuit against the beauty megachain Sephora that carries Ahava in Europe.

On April 20, an oil rig named "Deepwater Horizon" exploded off the Coast of Mexico, instantly killing 11 workers, injuring 17, and exposing the violations of safety precautions by oil giant BP.  A gusher of undersea oil spews 40,000 or more barrels of oil A DAY into the ocean and onto the fragile, beautiful bayous and beaches of 4 states and has yet to be contained. CODEPINK co-founder Diane Wilson, South Texas shrimper and author of An Unreasonable Woman turned to her pink sisters and we sprang into action over the next two months. Our webmistress Farida set up a new website www.codepink.org/bp, and codepinkers pledged to boycott BP and coordinate actions to hold BP accountable and end offshore oil drilling for good.

Mother's Day, started by our foremother Julia Ward Howe with her Proclamation has become a full weekend for CODEPINKers to gather in the original spirit of the day. On Saturday, May 8, an action in DC shut down the military arms fair on the Mall for the afternoon; comedienne Roseanne Barr helped celebrate in Lafayette Park with her performance of One Taxpaying Mother's 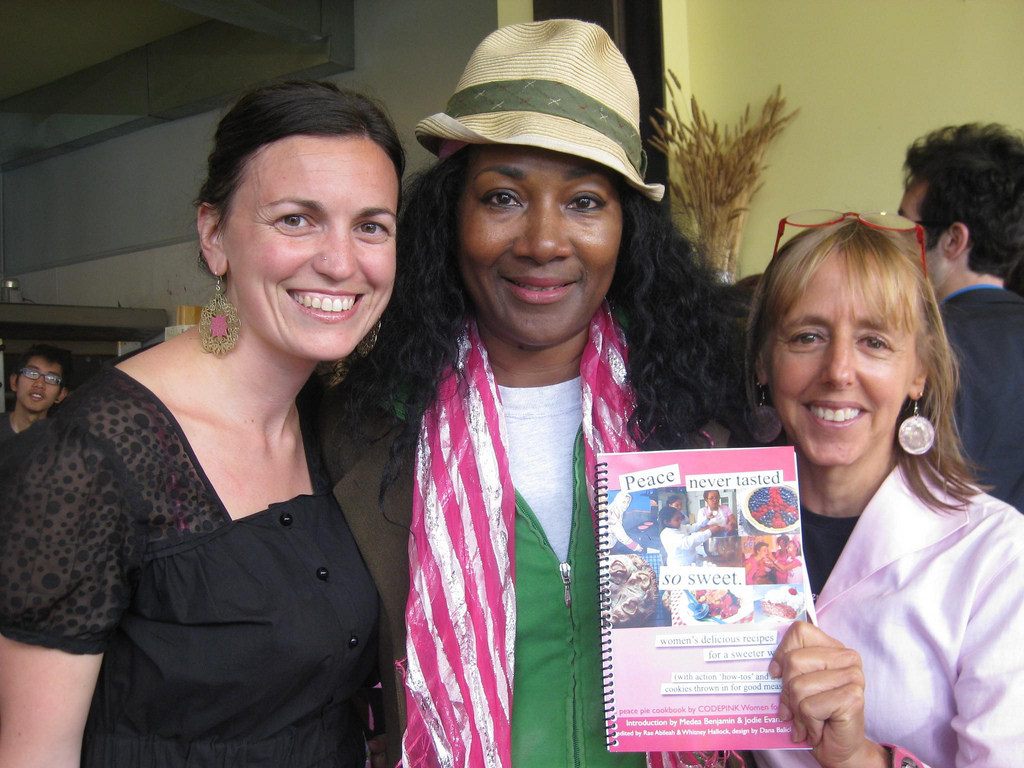 Manifesto. Around the country, CODEPINKers had local pie parties as a way to get ready for the release of the CODEPINK cookbook, Peace Never Tasted So Sweet: Deliciously Sweet and Savory Pie Recipes from Women Around the World, which is now for sale on our website for $25 - buy your copy and start baking up change!  The Real Change website highlighted Jodie Evans and other pinkers in a heart-warming article.

Congrats to Lisa Savage, coordinator of CODEPINK Maine, for winning the 2010 Peaceworker award at the 19th Annual Peace Supper put on by Peace Action Maine, and to Brenda Hillman, whose book of poems prominently featuring CODEPINK, Practical Water, was awarded a Los Angeles Times Book Prize for Poetry. Also in May, retired diplomat and very active CODEPINKer Ann Wright won the Montana PeaceSeekers Award, which says in part, "for traveling across Montana from May 11-16, 2010 to inspire Montanans by your appearances to move to higher levels of peacemaking action and resistance to unjust wars."?

Several national email alerts were sent out asking members to call Congress with a strong message of NO to war funding; YES to exit strategy. Janet Weil, former national staffer but forever a codepinker, also organized a visit to Congressman George Miller, chair of the House Education and Workforce Committee, who became one of nearly 100 co-sponsors of HR 5015. Janet represents CODEPINK to the United for Peace and Justice Afghanistan working group and has been re-working the Afghanistan webpage with Dana and Farida.  If you would like to be on the biweekly conference calls on the US war in Afghanistan and how to end it (Berlin, Germany codepinker Elsa Rassbach also participates and gives a European perspective), or you have suggestions for this campaign, please email Janet at [email protected]. 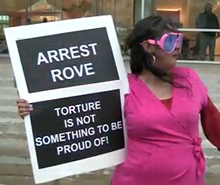 Karl Rove Arrested!  Rove's national tour for his ironically titled Courage and Consequence was pinked all along the way, from Alabama to California. "Bush's Brain" has been a target of CODEPINK birddogging and truth-telling since November 2002, as you can see in this excellent Arrest Rove Timeline.

CODEPINK Arizona has been active on the issue of immigrants rights for years. When the racist bill, SB 1070, aka "Papers Please" was voted into law, Phoenix CODEPINK took action and made the news!

Nancy Mancias has been doing great, steady organizing on our Ground the Drones campaign, in alliance with Nevada Desert Experience. On May 18-19, a newly reinvigorated San Diego CODEPINK group with other peace and justice allies did actions at the home and business of the CEO of General Atomics, maker of the Predator and Reaper drones.

On May 24, Crude Awakening happened at BP's headquarters in Houston, Texas, led by Diane Wilson and her oily friends. Texas and national PINKs got nude to expose the naked truth of BP's crimes against the earth.  As the tragedy of the BP oil gusher deepens and the contamination spreads, this disaster stays in the news and on our hearts.

The Gaza Flotilla, which included Ann Wright, was attacked by the Israeli navy in a night raid, and nine brave activists, one a 19-year-old Turkish-American, were murdered. This outrage ignited protests around the world, including CODEPINK protests in front of Israeli consulates in the US. City resolutions in SF and Richmond condemning the attack were proposed. CODEPINK generated nearly 10,200 signatures on our petition to Obama.  The terrible assault on humanitarian aid workers was yet another turning point in international public opinion towards Israel's increasingly brutal occupation policies.  Ann Wright is on the road on a speaking tour about the siege on Gaza all summer long. 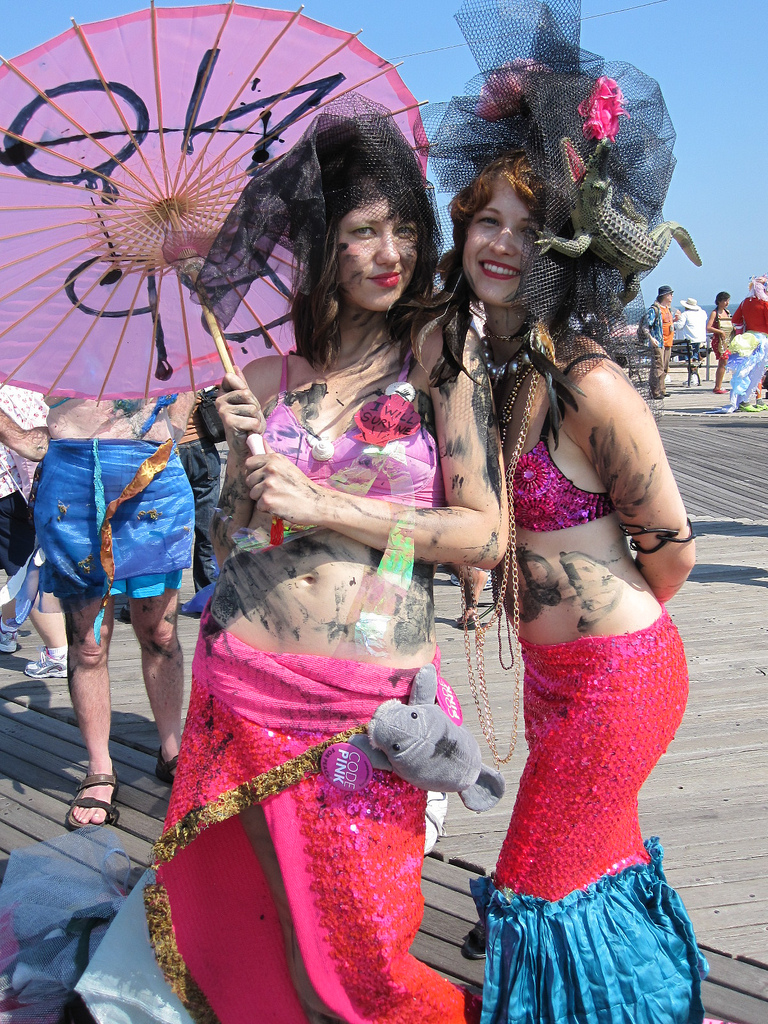 On June 19, 60 days since the oil spill, we coordinated a day of action to hold BP accountable.  We protested at a BP-owned station in LA, organized the Mermaid Survivor of the BP Oilspill Contingent in the Coney Island Mermaid Parade, brought the boycott into the World Nude Bike Day ride in Madison, and many more!

June 19-26 we joined in the massive people's movements gathering in Detroit for the US Social Forum.  Live from Motor City we commemorated the death of the Hummer by burying a Hummer (goodbye gas-guzzling war machine, hello renewable energy!) at the world-famous Heidelberg Project. Watch the video of our Hummer Burial being transformed into a giant flower pot and read Medea's piece on the long-awaited, gas-guzzler funeral.  Read Rae's blog on the full week of workshops, assemblies, and actions at the Social Forum.

With all the heartbreak, it's important to remember and celebrate our victories: In Philadelphia, longtime coordinator Debi Richter reported: "I'm delighted to share that we have just learned that after an 18 month protest campaign co-led by CFPA, the Army has decided to close the Army Experience Center at Franklin Mills Mall in Northeast Philadelphia.

Looking Up: War Is Over (if you want it)

(An uplifting report inspired by article from WarIsACrime.org)

The tide is turning against war.  ?

The Hummer is dead! 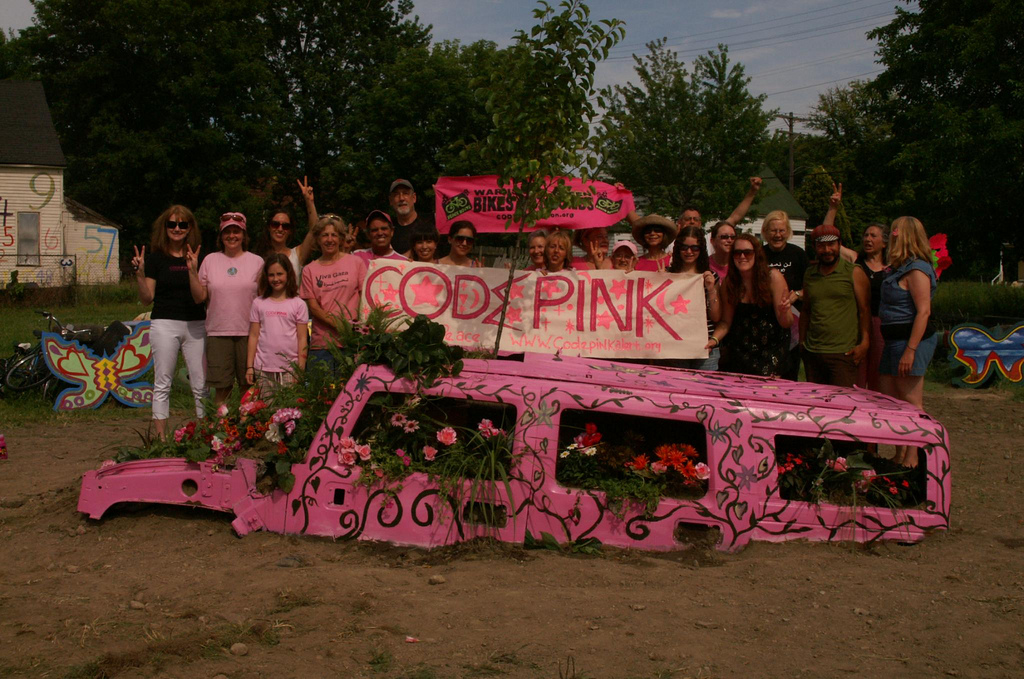 The attack on Kandahar has been stalled!?

The majority of the public is on our side!

Dozens of reports and experts are on our side!?

The economic and political crises are on our side!?

Torture protesters have been acquitted!?

The Israeli blockade of Gaza is breaking with international pressure!?

General McChrystal is out the door!?

A congresswoman, under tough pressure from us (including Maine CODEPINK actions at her fundraiser), told Petraeus he's making us less safe!?

A reporter asked the President when we'll get out "and spare us the Bushisms".?

In an unprecedented act, a congressman asked us to lobby his colleagues against war funding!?

The International Criminal Court has defied the U.S. and put aggression on the list of offenses to be tried!?

Resolutions against war spending are being passed by political parties, towns, cities, and labor councils.?

Cities are putting Cost of War counters on city hall.?

The peace movement (this cannot be assumed) is turning against the war escalation funding!?

Nationalistic competitive spectators can turn to soccer instead of war!

Do You Want to Be Part of This Movement When War Ends for Good?

Then join us in action!

Be Patriotic and Boycott BP!

Bring the "Bring our War $$$ Home" message to your town's parades and fireworks by baking a pie and highlighting the federal war budget.  After all, activism is as American as Apple Pie!

Everywhere, third Wednesday of every month

Think Outside the Bomb Disarmament Summer

CODEPINK is a cosponsor of this great action camp.  The organizers are looking for more workshop facilitators and would love someone to do a CODEPINK workshop on our creative direct action tactics and Congressional disruptions!  Anyone interested?

CODEPINK is a cosponsor, open for more workshop proposals

Finally, we'll close with this quote from Renay Davis, co-coordinator with Nancy Mancias of the San Francisco local: "We held our monthly march for Peace on the Golden Gate Bridge today [June 13]. We were only five marchers, but the weather was beautiful, the response was great and we met and posed for photos with a family from Morocco and Sudan. The family of four children and their parents were thrilled to see a group of Peace people carrying signs proclaiming 'Free Gaza'; 'End the Occupation'; 'Peace' & 'Stop Funding All War'"

The Roseroots Report is a bimonthly bouquet of CODEPINK local actions and news.  Why roseroots? Because we're cultivating a vibrant pink flowering garden with a hearty stemming history and strong roots, not just little "grassroots."  The 1912 Lawrence textile workers on strike had it right when they said, "We Want Bread, But Roses Too!"  Our pink hearts are moved by CODEPINK's approach to peacemaking: we aren't just about getting out a talking point or ensuring a basic right, we're about bringing our money back to our beloved resources - schools, health, parks, libraries and more, disarming our defenses, opening our minds to new narratives and possibilities, and creating beauty.  www.codepink.org