Report Back on Fundraiser for Drone Program Whistleblowers 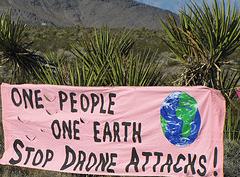 A gathering at the Berkeley Fellowship of Unitarian Universalists (BFUU) on January 24 focused on U.S. drone killings. It was also a fundraiser to support the four courageous ex-drone operators who are telling the world the truth about cruel and irrational use of drones in the endless U.S. 21st century wars.

The MC of the event was Toby Blome, a prominent, persistent activist against the drone wars. Accompanied by four CODEPINK sisters and one CODEPINK brother holding posters of children who have been killed by drone strikes, Toby began with a short presentation on the U.S. government’s use of killer drones and CODEPINK’s campaign against it. She said 150 people, 50 of whom were veterans, came from 20 states to protest drones at Creech AFB in March 2015. They split in small groups, each with their own action.  Rather than all getting arrested at once, the activists using this method extended the actions and the length of time that Creech was shut down.

Toby also talked about four drone operators who have spoken out against the atrocity of this weapons system, which has mainly killed children and civilians.  She said the drone whistleblowers do not want the funds for themselves,  but for legal fees. She hinted that there was more to come in the anti-drone campaign but explicitly refused to provide more details.  Toby pointed out that besides targeting innocent Muslims,  drones have the potential of stifling dissent at home and abroad. In fact, this is the reason drones have become her primary focus. She concluded her presentation by introducing Cecile Pineda, a dedicated CODEPINK activist, scholar and author.

Cecile told an extraordinary story about language and the “first peoples” or Old Europeans of the area we now call Eurasia. She discussed how language defines the frame of reference of a people’s view of the world. Archaeological evidence about how the first peoples of Eurasia lived shows a life that was free of violence, hierarchy, weapons, and a striving for success. These people were overrun by a people who rode horses, had weapons, herded animals, and had a hierarchical and oppressive society. These conquerors spoke a language she called Proto-Indo-European which was the ancestor of most western and some eastern languages. This language had constructions to denote possession, domination, and many other things which we take for granted in our culture, but were missing in the language of the Old Europeans.

Among other things, Cecile noted that the conquest of the Old Europeans was analogous to the conquest of the indigenous peoples of the Americas by Europeans. She noted that the native people who first greeted Columbus on his arrival in the “New World” were peaceful and welcoming. Columbus responded to their pacifism with violence and enslavement, a fact not mentioned in the history we are taught about his “discovery” of the “New World.”

Cecile had pre-signed copies of her latest book, “Apology to a Whale”, for sale, and the proceeds are going to a fund to provide legal support for the drone war whistleblowers in their fight against government harassment. The government has been retaliating against these veterans, which has even included harassment of family members.   We need to support these courageous veterans who have broken ranks from the drone program and are speaking the truth, and create an environment in which others will feel safe to step forward and join them. Toby concluded the evening with an appeal for people to contribute to this fund.

$475 has been raised from contributions and the sale of books for the drone whistleblowers’ defense fund.

Carol Pinson is an activist in the SF Bay Area.