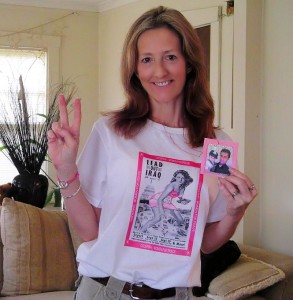 Yesterday I received an email notice from military mom and activist Cindy Kaylor who wrote to share the devastating news that Dariana Donovan died earlier this summer of lung cancer.  Since October, 2006, Dariana has coordinated a CODEPINK local group in Peoria, IL.  Dariana's spirit of activism, fearlessness, creativity, speaking out, community organizing, videos and blogs, and campaigning has inspired so many of our CODEPINK activists.  Dariana's son, Dustin, is currently serving his second tour of duty in Iraq.  Her daughter-in-law deployed to Iraq in May of 2007.  You can see a video of her son's visit home on 4 days of leave on Dariana's YouTube channel here: http://www.youtube.com/profile?user=DariDonovan

Dariana answered CODEPINK's call to action with such creativity, perseverance, and compassion that she will forever be one of my sheroes.  Dariana took on CODEPINK's national campaigns and added her own flare to make them something really special: She printed out our photos of Iranian children, made peace necklaces, AND printed her own t-shirts with the 50-foot woman design and then sent us a photo to add to our Iran campaign page.  She created the CODEPINK Peoria blog (http://daridonovan.net/blog/) to share news about local peace actions and recent soldier deaths.  Just weeks before she died, she stood in solidarity with activists all over the country on Memorial Day to banner over the freeway for peace and impeachment.  You can see photos of her and her freeway blogging PINK team here:  http://www.codepinkalert.org/userdata_display.php?modin=54&uid=5486

A year ago, Dariana was busy urging her representatives to stop buying Bush's war.  She visited Senator Durbin's office and was told that even though the office had an "open door" policy, she would not be let inside.  She and her CODEPINK Peoria friends stood outside in the cold for an hour waiting and then meeting with three of Durbin's staffers about the war funding issue.  Dissatisfied with the response, Dariana next confronted Congressman Ray LaHood at a press conference and at a biker rally to benefit military families.  LaHood agreed to meet with Dariana after the TV cameras were gone, and Dariana created this video, "Ray LaHood On and Off Camera," from their conversation:  http://www.youtube.com/watch?v=9FqGcGYNJrI
Dariana didn't wait for LaHood to change his "open mind"; she went straight from that event to organize a peace rally with music, poetry, art, and, as she wrote to me, "a chance to sign up new CODEPINKERS!"

CODEPINK organizer Janet Weil was in touch with Dariana earlier this summer and wrote, "Even over the phone, Dariana's strength, eloquence and caring heart came shining through. I will never forget her telling me that she regarded her stage 4 cancer as an opportunity to appreciate life and continue with peace work. Her courage and gratitude for life and its blessings were all the more impressive since she was also a mother of a soldier in Iraq. How my heart aches for him. I talked to Rae about Dariana's impact on me and said, 'We have to get her to the RNC... she would inspire so many women there!'  She continues to inspire me and will inspire others if we can get her story out to others. We will just have to carry on in her memory and the memory of so many others who have passed on during the years of this terrible illegal war."

While battling Stage IV lung cancer, Dariana was still considering joining CODEPINK to protest the Republican National Convention last month.   In an email to me she wrote, "The healing thoughts and support I have received from Codepink sisters nationwide has been most touching and greatly appreciated.  As I told Medea, I will continue to speak out against this war and the Bush administration as long as I have breath in my body!  Thank you all for all you do and for the show of love!"

If you didn't get a chance to know Dariana while she was alive, you can see her video about why she supported the troops, including her son, and opposed the war, here:
http://www.youtube.com/watch?v=-0eT-h5ruw4

Dariana will live on in our hearts and her spirit will continue to ignite our activism.

If you would like to make a donation to CODEPINK in her honor, you can do so here.