Reflections from a CODEPINKer at the US Conference of Mayors 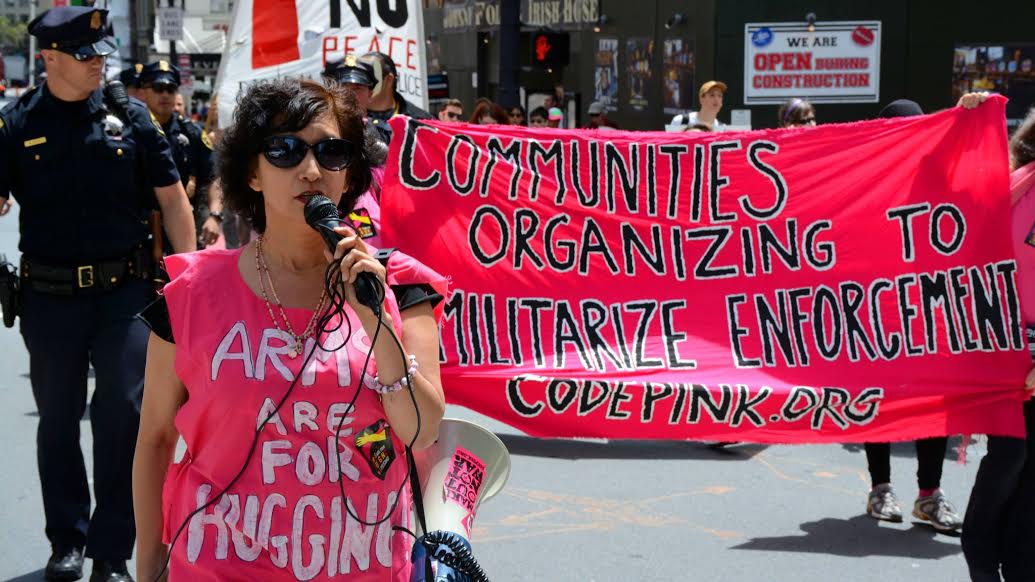 The words of activist Mollie Costello, Executive Director of the Alan Blueford Center for Justice, are still echoing throughout my brain. To date, 534 people have been killed by police in the U.S. There is a sentiment amongst citizens that they are at the mercy of police control and within communities of color, a structural racist violence.

I had the privilege of standing with some beautiful, progressive and passionate individuals in the San Francisco Bay Area. Armed with pink hearts and dressed head-to-toe in pink, we took to the streets; in rebellion, in anger, in sadness, but most of all in solidarity demanding change.

June 19th 2015  marked the beginning of the US Conference of Mayors in San Francisco.  While hundreds of mayors from across the country gathered inside the Hilton Hotel, nonviolent civil disobedience was happening in and around the hotel. The energy inside the hotel lobby was that of a run-of the-mill conference. Men and women in muted colors and business attire stood around, shuffling papers and weaving their way through crowds of press and tourists.

Outside the excitement and energy were palpable.  At the top of a garage, across the street from the mayor’s conference, three brave women dropped the iconic CODEPINK slip (a multi-story pink lingerie used to give Bush the ‘pink slip’ over the years). CODEPINKers on the ground gathered press, tourists and fellow activists to watch as the pink slip unfurled at 10 AM. The slip waved magnificently, reading “Arms Are For Hugging Not Policing” against the gray wall of the garage.

There was awe and celebration from passersby on the street. Smartphones and cameras were clicking away but the slip was dancing so wildly in the breeze that “Pirate Mike’, a homeless Iraq War veteran, climbed to the 4th floor and secured the bottom edges so the words could be more easily read.  Moments later, CODEPINK co-founder Jodie Evans came running out of the Hilton hotel.  She had hoped to get a  more direct shot of the banner from the windows of the hotel.  She made her way up a back staircase to the 4th floor ballroom to find the mayors looking out the window at the slip.  She was quickly escorted out by the hotel general manager who was shocked she had entered a secure area.  “Don’t you know my hotel is crawling with Secret Service?”

As we stood below the pink slip, we gave out free hugs, and encouraged engagement to demilitarize our cities.

Buttonholing dozens of mayors, we handed out copies of our resolution calling for the demilitarization of local law enforcement, which included putting restrictions on the Department of Defense's 1033 program, and prioritizing the need for police to have cultural sensitivity training. Not a single Mayor had stepped up to sponsor the resolution, despite the continued police violence nationwide following Ferguson, and President Obama’s announcement in May to ban certain military weapons from reaching the hands of local law enforcement.

It was clear the cops had Obama on their hands so we could stretch our activities in and around the hotel.  We were able to keep the pink slip up for a record 45 minutes.  As the fabulous banner team of Nancy Mancias, Susan Witka and Catherine Hourcade returned to us outside the hotel, the Iraq War veterans and Stop Mass Incarceration activists closed O’Farrell Street with a “die-in” that lasted for 15 minutes, allowing us to hold the fabulous banner Chelsea Byers in the LA office had made the day before.

After our two hours of hugging and banner drop, we moved inside the hotel.  Because the POTUS was speaking during lunch, the mayors had to go through a security checkpoint which forced them into long lines in the lobby. We CODEPINKers spoke to about 100 mayors and staff,  offering our ARMS ARE FOR HUGGING NOT POLICING stickers and following up with our resolution.  Some were with us and some were happy to have the weapons.  We learned that the police have a lot of power over their mayors and were also a big presence at the conference, pushing for even more control in the cities.

We finished when they all disappeared to listen to Obama and Nancy Pelosi, thankful for our safety, no arrests and the visibility of our action.

The next day, June 20th , CODEPINK members and others gathered on the corner of Market and Powell Street for a rally and march. Rhythms of grief, outrage, and unity made their way through each individual standing around our speaker system that morning. Notably, the words of La Mesha Irizarry, the mother of a son whose life was taken at the hands of police violence took to the the microphone to address the crowd. La Mesha, worked in program management of Domestic Violence issues, and substance use issues, until her only child, Idriss Stelley was shot 48 times by 9 SFPD officers inside the Metreon Theater. Among them are Officer Ian Farminger and Officer Razzak, now going to jail on multiple corruption and theft charges. La Mesha is the administrator of the Idriss Stelley Foundation, that provides free direct services to survivors of police violence, and families of loved ones killed by law enforcement.

Ending our pre-march rally was the energetic, intelligent and soulful Mollie Costello.

A former RN, now turned full-time activist since 2012, Mollie, is the head of the Alan Blueford Center for Justice. Blueford was killed in 2012 by Oakland police at the age of 18. Mollie works tirelessly to end the state-sponsored war on black lives, and sent us off with powerful messages of justice.  Following Mollie’s call for solidarity we marched with dozens of others to the front of the Hilton hotel. Once at the Hilton we continued sharing stories and did a “die-in” on the pavement of O’Farrell Street to honor the lives of the victims taken this past year in police related deaths.

The weekend was full of memories that I’ll carry with me forever, and until all of us are free CODEPINK will continue to stand up to violence, militarism, injustice and war.