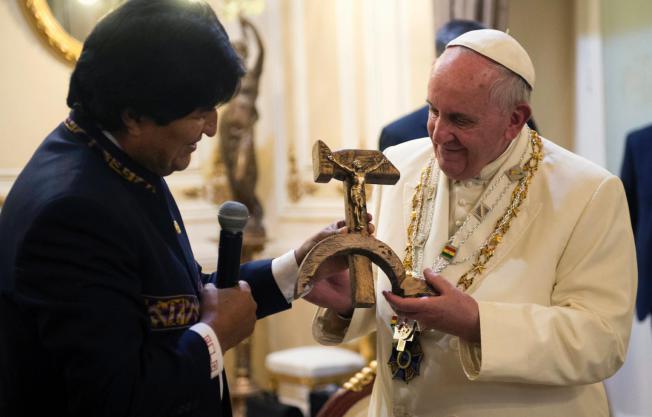 When I was in Brazil a few months ago the leadership of the MST invited me to see the Pope and Evo Morales with them in Bolivia. I asked if I could bring people. The team from our Summer School of Resistance and some activists from Palestine. They said yes, and Tony said he would fund it. Here is the reflections of one of those who went, Felipe, who was often with the CODEPINK team a few years back. At the time he was with Get Equal and a partner in crime with Ellen S. He has given permission for me to share this with you.

These are my reflections from my time in Bolivia, it’s a little long but I really hope you take time to read it.

It's only a few days I'm back. I was part of a small delegation from the US, the vast majority of the 1,500 people were from Brazil, Argentina, Uruguay, Bolivia and Paraguay. To be completely honest with you I didn’t know what would actually happen there. The communication with the organizers was hard and they only sent me the plan for the meeting the day before I left.

This was meeting sponsored by the Vatican and Bolivia. So I got to hang out with high officials from the Vatican and ministers from Bolivia for several days. I met in a very small meeting with Cardinal Peter Turkson, he is the second in command to the Pope and I shared the content of my letter.

When I was first invited I thought I was going to meet with Pope Francis in a small setting, well that didn’t happen. So I quickly had to device a plan to deliver the letter I brought with me asking Pope Francis to speak against the DAPA lawsuit, denounce detention centers and meet with undocumented people. My first instinct was to ask all of the high officials from the Vatican to deliver the letter on my behalf, that didn’t work out. The Catholic Church has a huge chain of command and I had to go through the Bishop of Washington, DC.

So I quickly changed my plan, I had to organize the entire conference to get the letter to the Pope. I’ve never shared my story so much in my life. J I told everyone about the abuses happening in the U.S., I read the letter to them in Spanish and in Portuguese. Because of coming out both as queer and as an immigrant I was able to add immigrant rights, opposition to state violence against black folks, and LGBTQ rights in the official document delivered by movements from Latin America to the Pope. This is a document now called the “El Documento Santa Cruz.” This was not an easy process for me because I was coming out to Bishops and priests from all over the world, we all know the Catholic Church doesn’t have a great stance on LGBTQ issues. The more I came out the more others would also come out. In the end of the meeting, we had a solid queer group and the youth groups from Brazil were chanting anti-homophobia slogans. It was incredible to learn about the pain, resistance and resilience from the people in Latin America and to know they had my back.

But my mission to deliver the letter from the immigrant rights movement would not be finished until it actually made it to the Pope’s hand. I found my greatest allies in a Kurdish leader from the women’s liberation movement there, the Cuba delegation and a domestic worker organizer from Mexico. The plan was simple, whoever got closest to the Pope during his speech had to deliver the letter. I had 10 copies with me, so I distributed them to several of the people who agreed to help. The Kurdish woman got to seat next to him during his speech, the domestic worker organizer from Mexico was on the first role, and I was on the second layer of people.

When the Pope came by me I handed the letter to his secretary. The domestic worker organizer also found the secretary and gave him the letter. Then when the Pope came to shake the Kurdish leader’s hand, she delivered the letter to his hand. It was an epic moment, she looked back and I was on top of the chair with the Cuban delegation to give her moral support, she made eye contact with us and she gave him the letter. At the end of the event I asked her what she told him, she said, “This is a letter from immigrant youth in the US, please read it.” Folks, she had the opportunity to lobby the Pope to do a million things for her people yet she chose to tell him to read our letter. True solidarity is love shown through action.

At the end of the 3-day meeting, I was exhausted and I was still wondering whether the Pope read my letter. Then something miraculous happened, as I was about to board my flight, I saw the Pope’s plane in the runway, then a person who works at the Vatican approached me. He gave me a little leather bag with a rosary inside and he said, “El Santo Padre te quiere regalar eso.” Or “The Holy Pope wants to give you this.” I was startled and I still don’t know why I responded the way I did. I asked, “Why?” Then he replied, “He wanted you to know he loves you.” I think he read the letter, now we won’t know its impact until Pope Francis addresses Congress this fall.

Well, this was the end of my adventure in Bolivia; I’ve never met a group so courageous and inspiring in my life. I’m honored to have participated in this historic moment. Pope Francis asked forgiveness on behalf of the Church to indigenous people for the genocide that happened in Latin America. I couldn’t stop crying when I saw a room full of ingenious people standing up and finally starting the process of healing through the official acknowledgement of the evil done to them. I’m truly humbled by the power from people who are willing to lay down their own lives for our collective liberation.